When it comes to the youngest of the Weasley children, I can’t help but feel that Ginny Weasley’s character in the movie adaptations deserves much more appreciation than she gets. So I’ve decided to list below what I believe to be the top five Ginny Weasley film moments: 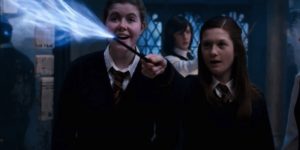 The Ultimate Fangirl (Harry Potter and the Chamber of Secrets, 2002)

We all dream of meeting our celebrity crushes, though we never imagine doing so in our own homes. While their first meeting took place at King’s Cross station back in Harry Potter and the Sorcerer’s Stone, it isn’t established in the film, as it is in the book, that Ginny knew who Harry was at this point in time. Therefore, fans could consider this moment in Harry Potter and the Chamber of Secrets as their first meeting. It’s an adorably awkward moment when Harry greets Ginny politely only for her to run off and escape back upstairs. After all, who wouldn’t make a run for it if they found themselves in the surprise company of a crush while in their dressing gown?

Showing of Skill (Harry Potter and the Order of the Phoenix, 2007)

When it comes to the films, Ginny is very much a side character until becoming more involved in Harry’s life, such as when she joins Dumbledore’s Army in Harry Potter and the Order of the Phoenix. One of her most memorable moments in the movie is when she casts “Reducto” in the Room of Requirement, blasting the mock Death Eater apart. This scene is a brilliant show of Ginny’s unnoticed skill as a witch, which is amplified by the wary looks Fred, George, and Ron give each other after this event. We also get to see Harry watching with a proud and impressed smile, something likely to have both Ginny’s and all Hinny fans’ hearts aflutter. 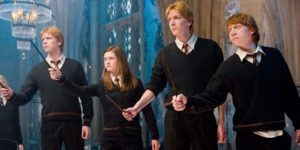 Silent Jealousy (Harry Potter and the Order of the Phoenix, 2007)

More often than not, it’s what goes unsaid that’s important – especially for a character like Ginny, who expresses how she feels primarily through action. One of my favorite Ginny scenes is in Order of the Phoenix when the golden trio, Ginny, Neville, and the twins discuss options as to where Dumbledore’s Army should hold practice meetings. During this scene, Hermione points out to Harry that “one positive thing came from today,” and after Harry asks what, she goes on to mention how his current crush, Cho Chang, couldn’t take her eyes off him. We are provided with a brief glance of Ginny following this statement showing her excitement has dimmed, and though she doesn’t voice her jealousy, the focus on her character makes her emotions apparent similar to the way that the scene in the Room of Requirement prior to Harry and Cho’s kiss does.

The Follow Through the Flames (Harry Potter and the Half-Blood Prince, 2009)

Fans have mixed feelings about the attack on the Burrow scene in Harry Potter and the Half-Blood Prince. However, I consider it both a necessary and significant scene to the series. The idea that not even the Burrow (which was always as much as a refuge for Harry as Hogwarts was) is safe sent chills down my spine. Of course, the similarities to Order of the Phoenix show when Harry pursues a taunting Bellatrix as he did following Sirius’s death, and Lupin and Tonks attempt to follow, though they are stopped by fiery serpents similar to but smaller than the one Dumbledore fought in the previous movie. However, I believe it’s Ginny who shines in this scene when she runs forward through the fire to chase after Harry. While this may also be evidence of Ginny’s recklessness as a Gryffindor, it also shows that she’s willing to put her own life at risk in order to aid Harry. 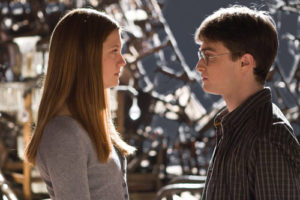 Another scene that I know many Potter fans had mixed feelings about is the first kiss. I must admit, while I do love the moment in the book when Harry and Ginny finally kiss, I can’t help but fall in love with this scene every time I watch it. Yes, it may be lacking in the heated chemistry that’s easily picked up on in the book, but I immediately feel some appreciation that the kiss between them in the film is the ultimate short but sweet expression of their affection. The fact that they share their first kiss while alone together in the Room of Requirement has a particular intimacy to it, thanks to it being a private moment as opposed to one in front of a crowd like in the book. Additionally, I also like how it’s somewhat similar to Harry’s first kiss with Cho, which also took place in the Room of Requirement.

So what do you think of these Ginny Weasley film moments? Do you have any of your own moments you’d like to share? We’d love to hear them.