From Harry’s majestic snowy owl, Hedwig, to Ron’s chatty scops owl, Pigwidgeon, there are many beloved birds in the Harry Potter series. Warner Bros. has included live owls in its spectacular live shows at Universal Parks & Resorts since they opened, but now these owls will be retired from their performing roles.

Speaking exclusively to the Protego Foundation (a Potter-inspired fan-made animal rights charity), Warner Bros. has confirmed that live owls will no longer be used in the shows at its theme parks. Although the birds will be missed by fans, their needs and sensitivities must come first. Not only will owls no longer make appearances at the theme parks, but Warner Bros. has also pledged that owls will be excluded from all licensed live Harry Potter productions. This change comes after private conversations between Warner Bros. and the Protego Foundation’s president and creator, Tylor Starr.

The Protego Foundation is so thankful to Warner Bros. and the Harry Potter Global Franchise Development team for honoring Hedwig, Errol, and other beloved owls by implementing such a kind policy to help other sensitive owls like them. 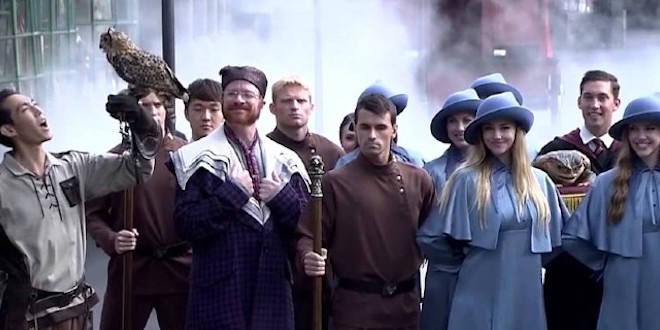 Starr stated that he is “so thankful“ that the company has taken this step and showed this thanks by sending Warner Bros. a box of owl-shaped, vegan chocolates.

The charity’s work has already saved lots of owls from a cruel situation. In 2014, it raised awareness of the use of owls as photo opportunities at the Wizarding World of Harry Potter in Osaka, Japan. After pictures of people standing next to owls tied on pedestals circulated online, the Protego Foundation highlighted how inhumane this situation was for the owls, and the practice was abandoned.

We learn in the Harry Potter series that owls are sensitive and remarkably intelligent birds who should be treated with kindness and respect. They shouldn’t be subjected to loud music, large crowds, and flashing lights.

The Protego Foundation will regulate Warner Bros.’s pledge by creating an online resource for fans to use. If anyone comes across any instances of owls being used for entertainment purposes, they will be able to report it using the Protego Foundation’s online resource. The resource will also feature actions that can be taken to stop “further neglect and exploitation” of owls in the future. Besides helping stop abuse, the site will also launch a historical record of the owls used for entertainment in the Wizarding World fandom. These resources will be released on March 31 and can be found via the Protego Foundation’s website.

This isn’t the first time that the Protego Foundation has strived to achieve magical change in the Wizarding World franchise and fandom. The charity has been campaigning for years for the topping on butterbeer sold at the theme parks to be made from a dairy-free alternative that would make the drink vegan friendly. The petition has so far received over 7,600 signatures, and that number is still rising.

After private conversations with [t]he Protego Foundation’s [p]resident and creator, Tylor Starr, Warner Bros. has confirmed that there are no longer live owl experiences [at] “[t]he Wizarding World of Harry Potter” at any Universal Parks & Resorts locations, including Osaka and the upcoming park in Beijing.

In addition to confirming no live owl experiences [at] “[t]he Wizarding World of Harry Potter,” Warner Bros. has confirmed that no live owls will ever make an appearance at any live productions licensed by Warner Bros.

“We learn in the Harry Potter series that owls are sensitive and remarkably intelligent birds who should be treated with kindness and respect. They shouldn’t be subjected to loud music, large crowds, and flashing lights,” says Protego Foundation[p]resident Tylor Starr.

“The Protego Foundation is so thankful to Warner Bros. and the Harry Potter Global Franchise Development team for honoring Hedwig, Errol, and other beloved owls by implementing such a kind policy to help other sensitive owls like them.”

When “[t]he Wizarding World of Harry Potter” opened in Osaka, Japan, in 2014, the opening ceremony featured live owls, and the park offered photo ops with live owls tied to a pedestal.

After [t]he Protego Foundation highlighted this cruel use of these sensitive birds on social media, the live owl photo ops in Osaka were quietly retired.

“To ensure that our magical fandom continues to be kind to owls, [t]he Protego Foundation will be launching an online resource and historical record of live owls used for entertainment in our fandom,” continues Starr.

“This online resource, going live at the end of March 2021, will feature actions that can be taken to protect owls from further neglect and exploitation.”

The page will also feature a report function where attendees of magical fan events can report live owls being used.

The Protego Foundation’s goal is “a wizarding fandom that is more considerate of the rights, feelings, and treatment of all creatures regardless of species, size, or magical ability.”