Last week, North Dakota State University, the same university where entomologists discovered Thestral incognitus, sent out a university-wide email to inform the campus community there would be a press conference to announce a new animal species, which had been discovered by graduate students in the Department of Animal Sciences. The email implied the new creature’s name would include an homage to Fantastic Beasts and Where to Find Them: The email’s subject line was “We found a fantastic beast.”

At the press conference, Avril Dwazen (a Danish animal science PhD student) and Lira Folpo (an animal science master’s student) announced they had discovered a new animal on campus. They first came across it last fall as they returned to the grad student offices after class. The two then held a three-month-long stakeout in the student union parking lot to study and photograph the animal in its natural environment. After careful analysis of its appearance and behaviors, Dwazen and Folpo decided to name the animal Sylvilagus niffleri, nicknamed the long-eared Niffler.

The two decided upon the name long-eared Niffler because it is roughly the same size as the Nifflers seen in the films. The Sylvilagus niffleri is also furry, mischievous, energetic, and attracted to green and golden-colored vegetation (which is very handy since those are the university’s colors). They also decided to name the animal after a fantastic beast because the Niffler’s abilities to camouflage so well and survive living on campus through the frequent subzero temperatures and feet of snow common to North Dakota winters seem like magical feats.

The department head explained how excited the scientific community was with this discovery because it presented a global challenge to really look and see what animals live in local neighborhoods. If they can find new species in the middle of North America, where else might animals be hiding? Since the long-eared Niffler thrives in cold conditions, scientists are excited to study how long-eared Nifflers handle cold weather and if humans can replicate any of their survival techniques. (This is one aspect of study all the students at the university, who spend weeks in below-freezing temperatures, are excited to learn more about.)

The press conference ended by revealing the first photograph of the Sylvilagus niffleri, which MuggleNet was able to obtain and can share with you all. 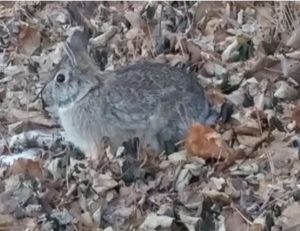 This long-eared Niffler is enjoying lunch outside the student union.