All About Julian: Rupert Grint Discusses His “Servant” Character

Wine-loving businessman Julian Pearce in M. Night Shyamalan’s Servant is a far cry from lovable Ron Weasley, but Rupert Grint is just as comfortable playing him. The suspenseful thriller series’s second season premiered on January 15 on Apple TV+. Grint spoke to Gold Derby all about Julian in a 15-minute interview and revealed why he hasn’t been in a movie in six years.

“He’s not an easy person to like; he’s got a lot of flaws,” Grint admitted freely about Julian, his character on Servant. He first read Julian as a “privileged bully who likes to manipulate people” before he realized the character was “just as broken as everyone else, and everything he’s doing is for the love of his sister” even if he doesn’t always make the right decisions. That is not to say Grint struggled to find a way to embody him. “It felt like I knew him very quickly,” he said when he remembered the beginnings of the twist-filled thriller series that will return for a third season. What to expect next? Even Rupert Grint, who had the rare chance to film his scenes chronologically on this show, can’t tell us.

In this world that [M.] Night [Shyamalan] has created, you never really know what’s going on. I had some ridiculous theories at the beginning. […] It constantly makes you question what’s real and what’s not, who you trust, which I think is exciting for a drama. 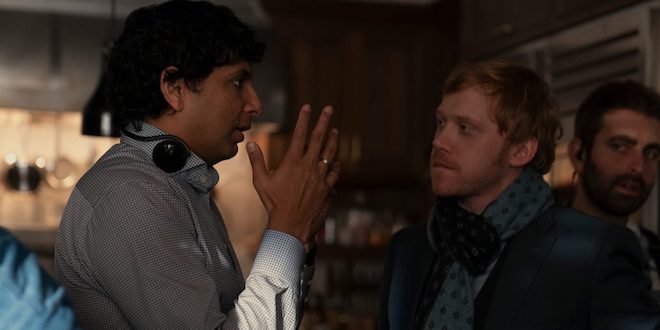 We certainly enjoy the thrilling story and watching him in a role so different from Ron. However, Grint has only been able to watch a couple of episodes of Servant.

I’m not very good at watching myself. I can’t really detach myself from the story, and I just can’t really enjoy it for what it is.

There is one thing about it with which he definitely feels comfortable: the television format.

I feel like I’m quite comfortable in TV. I like it, I like the flexibility, I like the pace of it as well. And the quality is really good, so yeah, I love TV.

Indeed, Grint hasn’t been in a feature film in six years, but this is how he prefers it:

Yeah, I know, it’s been a long time! But nowadays, I think TV is such an exciting place to be, with streaming and all these different platforms. With Apple [TV+] as well, I think it’s a really exciting platform because it’s just so new. And the show really feels like an Apple [TV+] product; it’s quite kind of dark and shiny and innovative in a way. The fact that we’re doing half-hour episodes in this genre is quite a new thing, I think. So yeah, it feels like a really fun place to be, and what I love about TV is, it feels quite familiar to me. Even with Potter, being a part of this long-running thing and having an opportunity to grow a character over a long series is kind of similar to Potter, in a way.

You can still stream Servant on Apple TV+. We are certainly keeping our eyes peeled for the release date of Season 3.