Castium Revelio: Back to the Stage We Go!

Welcome back to another week of MuggleNet’s Casting News, your source for the latest information on the latest projects from our Wizarding World alumni! Ready to dive in? We are! Castium Revelio!

Harry Potter Cast & Crew
Alfred Enoch (Dean Thomas) will be starring in Romeo & Juliet as a part of Shakespeare's Globe Theatre's Globe 2021 lineup, and the Mirror has named the production one of the "best UK theatre shows to book tickets for in 2021."

After missing out on its summer season last year, the Globe is finally reopening to the public with Covid-safe measures – including a face mask policy and special seating arrangements.

Tickets are available for purchase now, including for two performances that will be livestreamed.

A number of Wizarding World alumni – Brendan Gleeson (Alastor "Mad-Eye" Moody), David Heyman (producer of the Harry Potter and Fantastic Beasts films), Imelda Staunton (Dolores Umbridge), Jim Broadbent (Horace Slughorn), Dame Julie Walters (Molly Weasley), and Sir Michael Gambon (Albus Dumbledore) – were involved in the making of Paddington 2, the sequel to Paddington Bear. The family film has a new honor: Film review website Rotten Tomatoes has given it a higher rating than Citizen Kane. (The latter film fell to a 99% score because of a review from over 80 years ago, while Paddington 2 has kept its 100% rating.) Although he might be fictional, Paddington Bear himself reportedly chimed in about the news too.

David Bradley (Argus Filch) has joined Doctor Who: Time Fracture, a new immersive theatrical production set within the Doctor Who universe, according to Bleeding Cool and Superherohype. The production will see Bradley returning as the First Doctor, originally played by the late William Hartnell.

Bleeding Cool noted that Bradley praised the production, noting that those who aren't Doctor Who fans when they go in to see the show will be on their way out.

In a video shared by the Doctor Who YouTube account, Bradley is interviewed about his own history with Doctor Who.

The official website for Time Fracture describes the plot.

1940 – at the height of the Blitz. A weapon of unknown origin destroys a small corner of Mayfair, and simultaneously opens a rift in space and time. For decades, UNIT have fought undetected to protect the people of Earth from the dangers it poses. Weakened and beaten back as the fracture’s multiplied out of control, they’re close to defeat.

Tickets to Doctor Who: Time Fracture are available now.

Ralph Fiennes (Lord Voldemort) will also be taking the stage soon. He "will star and direct a new stage adaptation of T.S. Eliot’s Four Quartets" at the Cambridge Arts Theatre this summer, according to the Royston Crow.

The show will run from Monday, June 28 to Saturday, July 10. More information is available from Cambridge Arts Theatre.

Rhys Ifans (Xenophilius Lovegood) is among the cast members of the upcoming Game of Thrones spin-off prequel series House of the Dragon. A first look at the show, revealed by HBO and published by Variety, shows some of the cast members in character. Among them is Ifans, playing Otto Hightower. In the still, he is pictured to the right of Olivia Cooke, who is playing the role of Alicent Hightower. 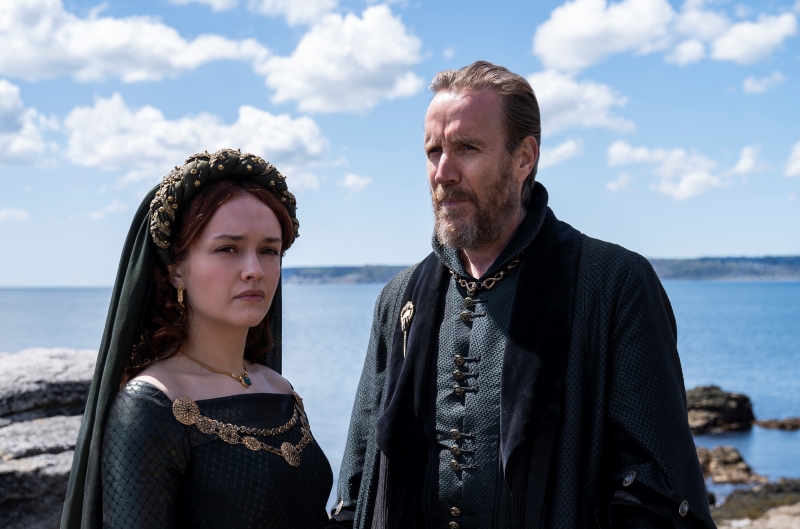 Olivia Cooke (left) and Rhys Ifans (right) are pictured in character in a still to promote "House of the Dragon."

'House of the Dragon' is set a few hundred years prior to the events of 'Game of Thrones' and tells the story of House Targaryen and the Targaryen civil war that became known as the 'Dance of the Dragons.' The cast includes Paddy Considine, Olivia Cooke, Emma D’Arcy, Matt Smith, Steve Toussaint, Rhys Ifans, Eve Best, Sonoya Mizuno, and Fabien Frankel.

House of the Dragon is anticipated to have a 2022 premiere date.

Gary Oldman (Sirius Black) is filming his new spy thriller, Slow Horses, in Essex, reports the Maldon Standard. According to the paper, "Oldman was at Harwich Haven Authority’s Navigation House, in Angel Gate" on May 5 to film for the Apple TV+ series.

Based on the Slough House series by Mick Herron, the show follows a group of MI5 agents who end up in a less-than-ideal department for the mistakes they have made on the job.

Oldman, 63, stars as Jackson Lamb, a brilliant but irascible leader of the spies who end up in the department due to their career-ending mistakes.

The mayor of Harwich, Alan Todd, was among those who expressed their excitement at the filming, and he expressed his hope that it will bring more tourism to the area.

LancsLive reports that Miranda Richardson (Rita Skeeter) has been cast in the second season of the Amazon Prime anthology series Modern Love, itself a take on the New York Times column of the same name. She will reportedly star opposite Game of Thrones actor Kit Harington, although no additional information about the episode or their roles was available.

Frances de la Tour (Madame Olympe Maxime) is among the actors who will be featured in a new digital short film project from the Nottingham Playhouse, reports the Hucknall Dispatch.

Conceived and commissioned by Nottingham Playhouse, 'Still Life' has paired writers with a member of local communities to help them create a piece that sheds light on a previously unexplored story.

De la Tour "will be playing Muriel in Alan Bennett’s sketch of the same name, continuing her long association with Bennett’s work including roles in The History Boys and The Habit of Art and People."

Fantastic Beasts Cast & Crew
Footage of Zoë Kravitz (Leta Lestrange) in the role of Catwoman in The Batman – also starring Robert Pattinson (Cedric Diggory in the Harry Potter series) – has been leaked by a Twitter user, as reported by CBR.com.

The footage comes courtesy of what looks like a featurette, and it's explained that the Selina Kyle we see in the film won't be Catwoman quite yet. From there, the clip cuts to shots of Selina riding a motorcycle, petting a black cat, committing a heist and even squaring off with Batman, some of which was seen in the first trailer from DC FanDome.

Emerging from a script by Hayley Schore & Roshan Sethi, with revisions by [Phyllis] Nagy, that made 'The Black List,' 'Call Jane' is set during the summer of 1968, which sees protests rock the Democratic National Convention. Against this backdrop, we follow Joy Griffin ([Elizabeth] Banks), a housewife and mother who experiences a life-threatening pregnancy that no doctor will allow her to terminate. After finding herself out of options, with little time to lose, Joy discovers a network of women who facilitate safe abortions for women in need—no questions asked. The group’s kindness and courage end up saving Joy’s life, while igniting a new sense of purpose in her: to help other women gain control of their destinies. The network’s leader, Virginia ([Sigourney] Weaver), takes Joy under her wing, and despite the risks they face in this pre-Roe v. Wade era, they hatch a plan to expand the network to provide safe abortions for all women who need them, regardless of their ability to pay.

Eddie Redmayne (Newt Scamander) is reportedly in talks to star in the West End revival of Cabaret. Citing a report from the Daily Mail's Baz Bamigboye, BroadwayWorld reports Redmayne is in talks to play the Emcee in the production, which "is expected to begin performances at Playhouse Theatre in November 2021." Jessie Buckley is reportedly also in negotiations to star opposite Redmayne as Sally Bowles.

Callum Turner (Theseus Scamander) was pictured on the set of his upcoming period miniseries, Masters of the Air, directed by Steven Spielberg. The Daily Mail writes that the miniseries, currently filming in Berkshire, is based on real events from World War II.

Additionally, Turner can be seen in a trailer for The Last Letter from Your Lover, an adaptation of the Jojo Moyes novel of the same name. Turner stars opposite Shailene Woodley in a cast that includes Felicity Jones, Joe Alwyn, and Nabhaan Rizwan.

The forbidden love affair between a 1960s couple (Shailene Woodley and Callum Turner) is uncovered by an ambitious present-day journalist (Felicity Jones) after she finds a trove of secret love letters.

The Last Letter from Your Lover will be released on Netflix on July 23.

Jessica Williams (Professor Eulalie "Lally" Hicks) will star in the second season of the HBO Max series Love Life, per Deadline. Williams will star alongside Chris "Comedian CP" Powell and William Jackson Harper, and writer Rachelle Williams has been added to the series as an additional showrunner.

The second season of the rom-com anthology series will see 'The Good Place' star Harper replace Anna Kendrick as the focus. He plays Marcus Watkins as he comes out of a years-long relationship with the woman he thought was going to be his person. The rug pulled out from under him, he is plunged back into the search for the romantic fulfillment that he thought he already had found.

Cursed Child Cast & Crew
Sir Colin Callender (producer, Harry Potter and the Cursed Child) is one of the producers of The Undeclared War, a six-part thriller series coming to Peacock. According to Slanted, the series now has its cast.

Slanted quoted a description of the series's plot.

Set in 2024 in the run up to a British general election, 'The Undeclared War' tracks a leading team of analysts buried in the heart of GCHQ, the UK’s version of the NSA, secretly working to ward off a cyber-attack on the country’s electoral system.

Callender also commented on the project.

'The Undeclared War' is a stunning cautionary tale that brings to life a world never seen before on television or in film. I’m equally thrilled to be partnering with NBCUniversal International Studios, Channel 4 and Peacock, all of whom have been fiercely supportive and dedicated to bringing this provocative, timely story to the screen.

That’s all for this edition of Casting News, but stay tuned for even more great updates! Until then, let us know your thoughts in the comments below!