The theme for the seventh annual Harry Potter Book Night – which this year is being celebrated tomorrow on June 24 – is Diagon Alley. I love this theme because Diagon Alley is the first magical place that Harry visits and hence is suffused with the possibilities of this new wizarding world that has opened up for him. One of the delights of children’s literature is its unjaundiced viewpoint – a perspective at once fresh and familiar, the gaze of our own first innocence. Harry Potter partly performs this rejuvenated perspective by asking the reader to view their own world through the comic lens of Mr. Weasley’s wonderment. (How do airplanes stay up?) But more fundamentally, it performs the enchantment of the familiar through the whole wizarding world. In Diagon Alley, the quotidian act of shopping and the deeply familiar annual ritual of getting stuff ready for the new school year are rendered magical. 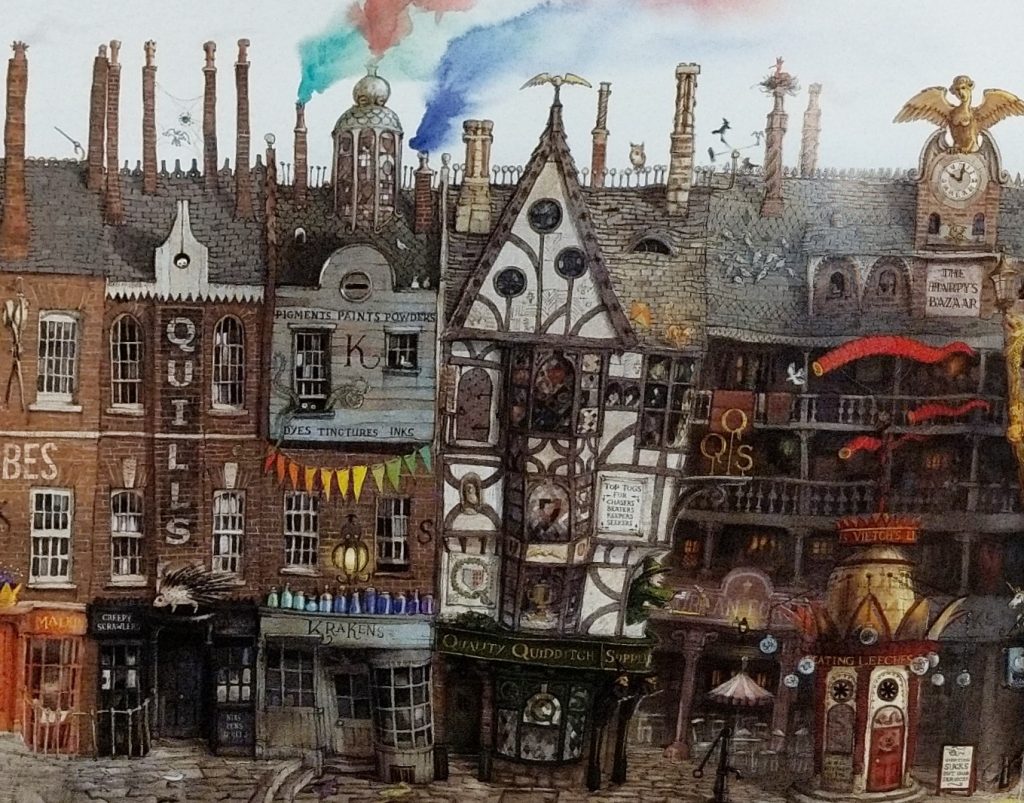 As a reader, we see everything from Harry’s point of view, and as he first gazes on Diagon Alley, “Harry wished he had about eight more eyes” (SS 71). Diagon Alley is Harry’s first physical entrance into the magical world, and each shop that he visits introduces an aspect of the wizarding world – wands, owls, spellbooks – which will later be crucial. In Jim Kay’s delightful illustration of Diagon Alley – which is one of his personal favorites – he placed lots of little jokes and Easter eggs about his own life. Rowling has placed important and playful clues in Diagon Alley likewise, but in her case, they are clues that point forward into the rest of the series. In Harry Potter and the Sorcerer’s Stone, the reader is guided as to how Harry Potter’s plots will work. Subtle clues are laid while our attention is deflected elsewhere – from the seemingly chance meeting with Quirrell in the Leaky Cauldron to Lucius Malfoy returning a book (or two) to Ginny’s cauldron. This moment in Harry Potter and the Chamber of Secrets is when the first Horcrux – Riddle’s diary – enters the story. It is suitable, therefore, that in Harry Potter and the Deathly Hallows, we discover that one of the final Horcruxes to be found has likewise been hiding in Diagon Alley, deep underground in the Lestrange vault. 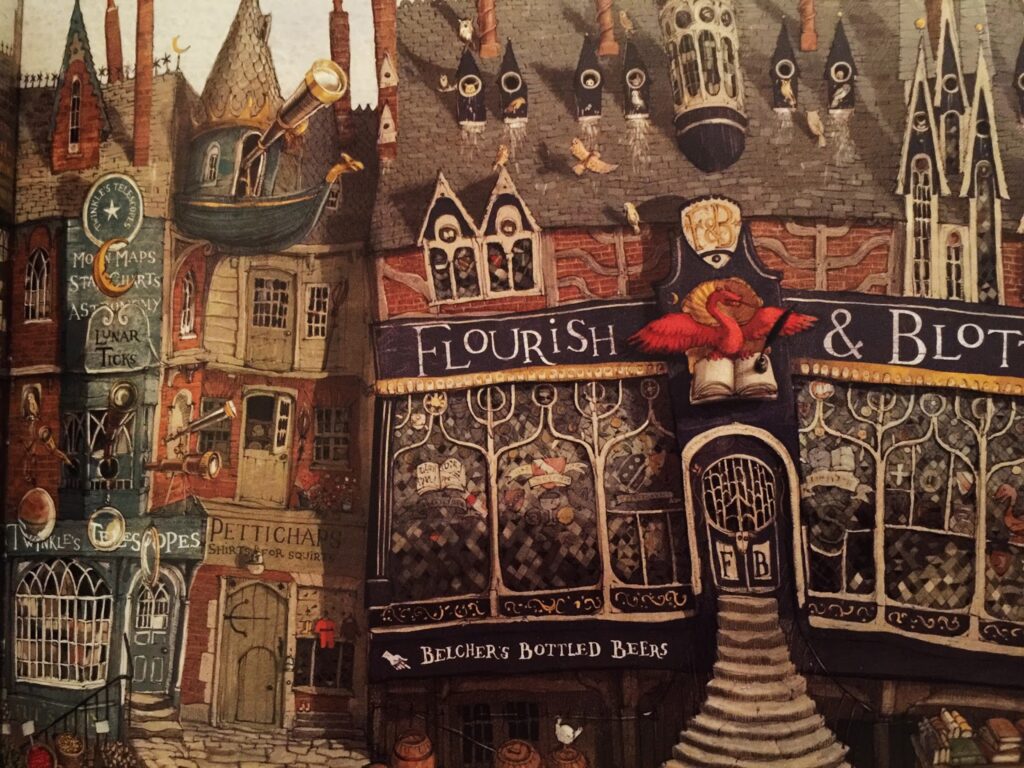 Diagon Alley is also a great topic for Harry Potter Book Night since books are so important to it. It has a spectacular book shop (with a pleasingly inky name), but it is also more subtly bookish. The name of the first witch that Harry meets – “Doris Crockford, Mr. Potter, can’t believe I’m meeting you at last” (SS 69) – sounds too good to be true. But Doris Crockford is in fact a real woman, and she is an author – the author of a book about the Flying Scotsman. This famous train is, of course, the Muggle equivalent of the Hogwarts Express – a steam-operated passenger service that runs between King’s Cross station and Scotland. Doris Crockford is a little hint toward the literary research that underlies Harry Potter.

It makes sense, also, that the first witch Harry meets in the Leaky Cauldron should be named after an author, for – as Rowling has noted – there is a book-related reason as to why this pub is located on Charing Cross Road. The Leaky Cauldron is the gateway between the mundane and magical worlds, and it is situated on Charing Cross Road because it is “famous for its bookshops, both modern and antiquarian… this is why I wanted it to be the place where those in the know go to enter a different world.” Muggle book shops are mentioned only twice in Harry Potter, and both times are in reference to those on Charing Cross Road. When Harry finds the Leaky Cauldron, it is located with a “big book shop on one side” (SS 68). These book shops are a metaphor for the way in which reading opens up – for the reader as for the hero – an entrance into a magical world.

The name of Diagon Alley itself is also “bookish” in that it is the first example (for many readers) of one of the literary aspects of Rowling’s novels: her playful and meaning-saturated names. Children listening to Harry Potter being read aloud notice immediately that Diagon Alley lies diagonally – a pun that satisfyingly suggests its magical intersection with reality. Such aural puns are one of the ways in which Rowling embraces the fact that, as a children’s book, Harry Potter will be read aloud. It is likely to be a listener rather than a reader, for example, who will first spot that Grimmauld Place is a grim old place and that Knockturn Alley (“nocturnally”) will be linked with the Dark Arts. Or that a Pensieve (“pensive”) might help you think. Or that Avada Kedavra (“cadaver”) is likely to kill you. With a number of these puns, the spelling is even likely to mislead the reader, helping the child spot the pun before their parent does. Prophet is such a good name for a wizarding newspaper, for example, that it once again is likely to be the listener rather than the reader who first spots that the Daily Prophet may be more interested in sales (“profit”) than truth. Dolores Umbridge has a name that is spelled exactly how umbrage is pronounced (“u-m-br-i-dj”) rather than how it is spelled.

Most fans, therefore, have noticed that Diagon Alley runs “diagonally,” but it has been less often realized that there may be a visual as well as an aural pun in the name. Does “Diagon Al/ley” run along one of those magical lines that are meant to intersect Britain: a diagonal ley line? (Delightfully, ley lines are also known as dragon lines, and of course, we do discover in the final book that it is true that there is a dragon under Diagon Alley.)

Ley lines are now a quasi-magical concept in which ancient British sites are linked by straight lines that connect key landmarks, such as Roman camps, standing stones, hilltops, ancient churches, holy wells, castles, etc., marking or creating lines of ancient, mystic energy. But the history of ley lines shows that the “Diagon Al/ley” pun works even better than I had thought since the man who first came up with the concept – Alfred Watkins in his 1925 book The Old Straight Track – believed that they marked ancient trade routes:

Watkins decided that these alignments represented ancient thoroughfares, routes along which goods such as salt, and craftsmen like flint knappers, traversed the countryside. He does speculate that the ley-men, surveyors using twin poles to lay out their routes across the landscape, were seen as seers of some sort because of their near-magical powers (he imagined the famous chalk Long Man of Wilmington to be an image of a ley-man) and that superstitions built up around way markers as the paths themselves fell into decline. But at heart, this practical man of means insisted that ley lines were a crucial element of pre-Roman British trade, tentative first steps on the journey to the mercantile empire in which Watkins grew up.”

Diagon Alley – a wizarding shopping street – is, therefore, a perfect encapsulation of a ley line: at once magical and mercantile. And I am delighted to say that the site of the original Charing Cross is, indeed, believed to lie on a ley line.

Tomorrow’s blog will look at Diagon Alley and Oxford and argue that this is another real-world location that may have influenced Rowling (albeit through a fictional lens).