Today, MinaLima, the design studio behind the graphic props of the Harry Potter and Fantastic Beasts films, is celebrating 20 years in the Wizarding World!

To celebrate 20 years of making magic, MinaLima announced today that it is working on an exciting new book. 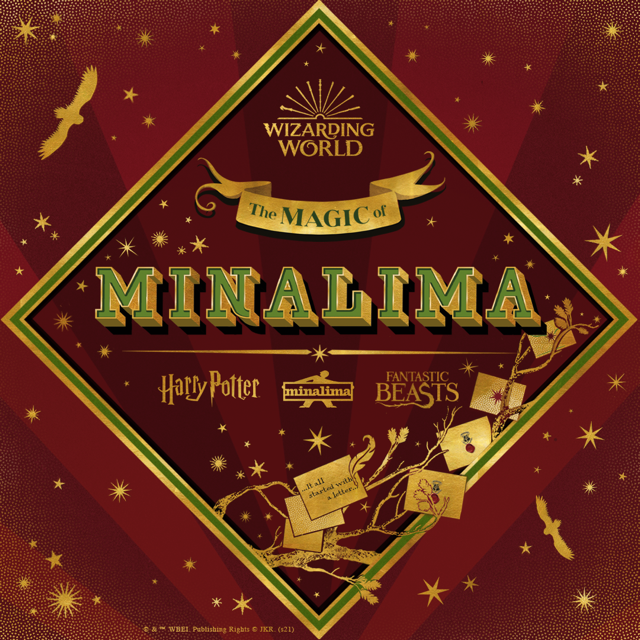 MinaLima announced a new book, “The Magic of MinaLima,” to be published in 2022.

The book, titled The Magic of MinaLima, will delve into its journey so far and will be published in 2022.

These last two decades have taken Miraphora Mina and Eduardo Lima on a magical journey, which they spoke about in a tweet earlier today.

Today we celebrate 20 years of making magic together! Our journey has been eventful – and our memories are many!

– taking us from a little corner in the [a]rt [d]epartment of the Harry Potter film studios to a flourishing design studio in London and gallery-shops around the world with our name above the doors!

Together with our amazing team, we have produced props, prints and products. We have crafted letters and labels. We have illustrated books, boxes and bottles.

And best of all, we have met thousands of amazing witches and wizards, mermaids and mermen, fairies and friends all over the world; our journey would not be possible without you.

We have lots of plans for the next 20 years…MinaLima will continue making magical memories!
Love from Mira and Eduardo. x

MinaLima has continued to celebrate its milestone throughout the day, showing its social media followers some sneak peeks of its upcoming books. To the delight of Potterheads, one of the never-seen-before illustrations shows Ron being yelled at by Mrs. Weasley in the form of a Howler, from MinaLima’s upcoming edition of Harry Potter and the Chamber of Secrets.

It isn’t just fans of the Wizarding World who marvel over MinaLima’s spectacular work. MinaLima also produces amazing illustrated classics, such as Alice’s Adventures in Wonderland & Through the Looking-Glass, Peter Pan, and The Jungle Book, as well as T-shirts, notecards, wallpaper, bookmarks, and prints.

Continuing their 20th-anniversary celebrations, MinaLima shared another sneak peek of one of its upcoming illustrated classics: The Wonderful Wizard of Oz. It is available for preorder and will be published on September 16, 2021.

We continue our 20th anniversary celebrations with another sneaky peek of The Wonderful Wizard of Oz, available for pre-order on https://t.co/iFVcFE4fLi! 💎✨ The book will be published on 16 September 2021. 🌟✨ pic.twitter.com/QsqH0nWQGu

It’s safe to say that we’re very excited to see the full extent of MinaLima’s Chamber of Secrets as well as their future works! Which scenes are you looking forward to seeing illustrated, and will you be picking up one of MinaLima’s stunning books for a reread in celebration of its anniversary?