James and Oliver Phelps may be on a summer break from their podcast, Normal Not Normal, but they have dropped back into our headphones with a surprise episode featuring two special guests: chart-topping singer-songwriter Ed Sheeran and his manager, Stuart Camp.

It turns out that Sheeran is a “lifelong, huge Harry Potter fan,“ which means that Potter is frequently featured throughout the episode. We’ve picked out our five favorite moments from the interview below, from Sheeran and Camp’s friendly Lord of the Rings and Harry Potter rivalry to the infamous “Lego House” music video featuring Rupert Grint.

Sheeran had always wanted Rupert Grint to play him in one of his music videos, but it looked like it was never going to happen until Tom Felton stepped into the picture. After striking up a friendship on Twitter, Sheeran “cheekily” asked Felton to help him get Grint involved in the video for “Lego House.”

[I said], ‘Can you speak to Rupert and see if he’d do the video?’, and [Felton] actually told me the other day that it wasn’t as open [and] shut as I thought it was. He really had to convince Rupert’s agent that this was a good thing.

It may not have been a straightforward task, but thankfully, they pulled it off and produced an iconic music video.

2. Sheeran’s manager carries a photo of the Weasely twins in his wallet. 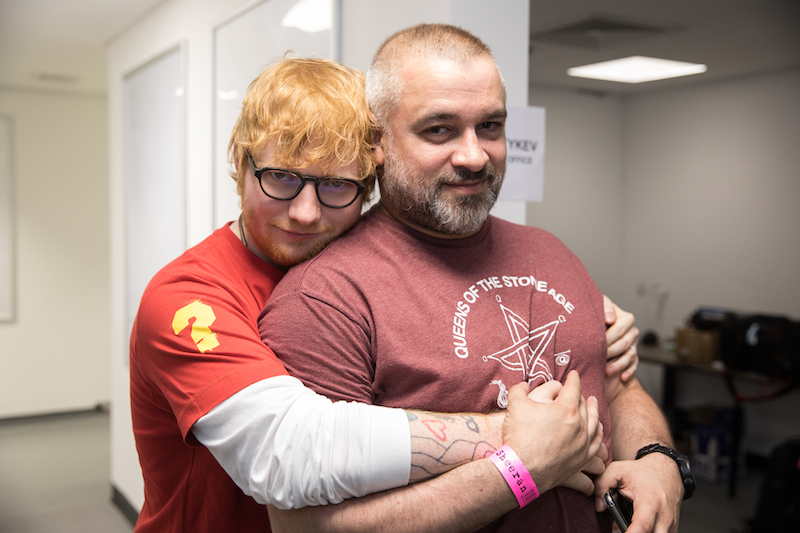 Ed Sheeran and his manager, Stuart Camp, share a friendly rivalry over “Harry Potter” and “Lord of the Rings.”

Sheeran likes to incorporate something strange into his management contract. Currently, Camp is required to carry a photo of James and Oliver Phelps as the Weasely twins in his wallet at all times as a result of the aforementioned friendly rivalry.

[Stuart] would always put the films down and say they’re a bunch of s***, so when we came to signing our management contract again […], because he didn’t like the ‘Harry Potter’ films, I was like, ‘You have to have a picture of Fred and George Weasley in your wallet at all times, and when you do a photo shoot for a magazine, you have to hold it up.’

When asked what “normal” means to him, Sheeran replied with “boring” before explaining that he loves eccentricity, something that drew him to a particular character in the Potter series.

My favorite character was always Luna Lovegood […] someone [who] dances to the beat of their own drum and doesn’t care what people think of them.

4. Harry Potter was the first book he read.

Like many people who grew up with the series, Sheeran revealed that he wasn’t a reader before picking up Harry Potter and the Philosopher’s Stone. However, after his brother became obsessed with the boy wizard, Sheeran wanted a piece of the magic, and for a while, the Potter books were some of the only books he read.

‘Harry Potter’ was, for a long time, the first and only book that I read. Apart from those and the Philip Pullman books, I didn’t read any books until my honeymoon.

5. Sheeran turns to the Potter movies for comfort.

In the quick-fire questions section of the podcast, Sheeran revealed not only that the Potter movies are his favorite movies but also that he watches them for comfort. Recently, on a plane back to the United Kingdom from the United States, Sheeran turned to Harry Potter and the Deathly Hallows – Part 1 and Harry Potter and the Deathly Hallows – Part 2 to make the time fly by.

There’s a comfort in it because you grew up with them. You can put them on anywhere at any time of the day and you can start at any point and they’re great.

We learned a lot in this special episode of Normal Not Normal! Season 3 of the podcast is due later this year; until then, we’ll be marathoning Potter movies just like global superstar Ed Sheeran.