This year marks the 20th anniversary of Harry Potter and the Sorcerer’s Stone, when the Boy Who Lived began his journey on-screen. Several exciting things are happening over the coming months to celebrate the iconic release that has since become one of the biggest moments in movie history.

From September to December, the Wizarding World is inviting fans new and old to join in the 20th-anniversary celebrations. The first event will be live and virtual on the official Back to Hogwarts Day, September 1.

Back to Hogwarts Global Fan Celebration / 20 Years of Harry Potter Movie Magic will be presented by the Harry Potter Fan Club, on the Wizarding World Digital YouTube channel, and hosted by self-proclaimed superfan and celebrity DJ Yinka Bokinni. Tom Felton will also be making a special guest appearance during the live show, which will surely delight adoring fans. Fans can tune in to the livestream starting at 5:30 a.m. EDT on September 1 or they can watch it on-demand at a later time. Yinka Bokinni will lead fans down memory lane during an interactive celebration of 20 years of fandom and share exciting Harry Potter news and features. 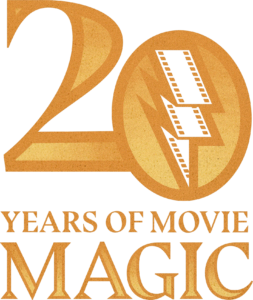 Every Wizarding Wednesday, new magical content will be released from Wizarding World Digital, including games, quizzes, and secrets from the Harry Potter crew. The first moment in the series went live today, August 25, as the graphic duo behind Harry Potter, MinaLima, demonstrated to fans how the Hogwarts letter was created.

There will be several more activities throughout the next few months, so make sure to keep an eye out on the Wizarding World Digital social media pages. Also, follow the #20YearsofMovieMagic hashtag to ensure you don’t miss a thing.

[6am (PST [sic]), August 25th, 2021], Los Angeles: This November marks twenty years since [t]he Boy Who Lived made his on-screen debut in Harry Potter and the Sorcerer’s Stone. The film smashed box office records for highest-opening weekend ever and is today regarded as an iconic moment in movie history. Two decades later, Harry Potter has become a pop culture phenomenon, and the film has since inspired millions of people across the world to fall in love with the magic of the wizarding world. Today, the official Harry Potter Fan Club has over 37 million members and continues to welcome generations of new fans every day.

In honor of this special anniversary, between September and December, the Wizarding World invites the fan community to celebrate 20 Years of Movie Magic from Harry Potter and the Sorcerer’s Stone, beginning with a live digital event to mark Back to Hogwarts Day on September 1st. Over 1.1 million global fans tuned in last year, and 2021’s departure is set to be even more spectacular.

“Back to Hogwarts Global Fan Celebration | 20 Years of Harry Potter Movie Magic” is presented by the Harry Potter Fan Club and will be hosted by celebrity DJ and self-proclaimed superfan Yinka Bokinni, with a special guest appearance from Tom Felton. Yinka will guide fans through an interactive celebration of 20 years of fandom and share breaking news and features that Harry Potter fans will not want to miss.

Early birds can tune in to [the] Wizarding World [Digital] YouTube [channel] from 5:30 am EST [sic] on September 1st to watch live or for fans wishing to watch a little later, the livestream will be available on demand. Don’t forget to follow the excitement on social media with #20YearsofMovieMagic.

Fans will also be able to discover how it might feel to start their own journeys to Hogwarts by trying out the new Platform Nine and Three-Quarters Instagram filter, available on Wizarding World’s Instagram channel from September 1st. In the words of Molly Weasley, “Best do it with a bit of a run if you’re nervous!”

Providing fans of all ages with a host of ways to engage with the celebrations, new exclusive content focused on 20 Magical Moments from the first film will be released every Wizarding Wednesday, including games, quizzes and secrets from the crew who brought it to life. Today, the first moment in the series goes live as Mina Lima [sic], the graphic design duo behind Harry Potter and Fantastic Beasts, present a behind-the-scenes video offering fascinating insights into how the iconic Hogwarts [l]etter was created; go to the 20th Anniversary Hub on WizardingWorld.com and check it out.

The Wizarding World offers something for every fan to enjoy, from getting lost in J.K. Rowling’s original Harry Potter novels, reliving the timeless film magic, [and] exploring immersive retail experiences and discovering unique live entertainment, which brings the magic to life.

There is so much in store, including a chance to find out which famous faces share your Hogwarts [H]ouse and more details to come on the hotly anticipated Harry Potter [q]uiz [s]how, which will air later this year in the US on HBO Max, Cartoon Network and TBS. In the meantime, fans can relive the magic at home, as from 1st September, the film will be available to stream on HBO Max as well as showing as part of the full film series on Syfy and USA Networks.

Fans are encouraged to keep their eyes peeled for more announcements and join the official Harry Potter Fan Club to be the first to get the latest news.