Would You Rather Escape the Dursleys or Get Caught by Snape?

Remember those awesome Harry Potter trading cards I introduced to you in my first post? Once you get your hands on some of these, you’re going to want to build a deck and start playing. Which cards do you add? Where to start? In this post, I will talk about two Adventure cards that can go in any deck type. As a matter of fact, there are some competitive players of the Harry Potter Trading Card Game who don’t consider a deck complete until these two cards are in them.

In the Harry Potter TCG, the Adventure cards are sometimes the best options to use against your opponent. You don’t need lessons to play them, and you can have them in any deck type. A handful of Adventures from each of the five sets attempt to capture some scenes that we love from the first two books. The goal of the Adventure cards is to send your opponent off on an Adventure and see if they can solve it in time to get back and win the game. 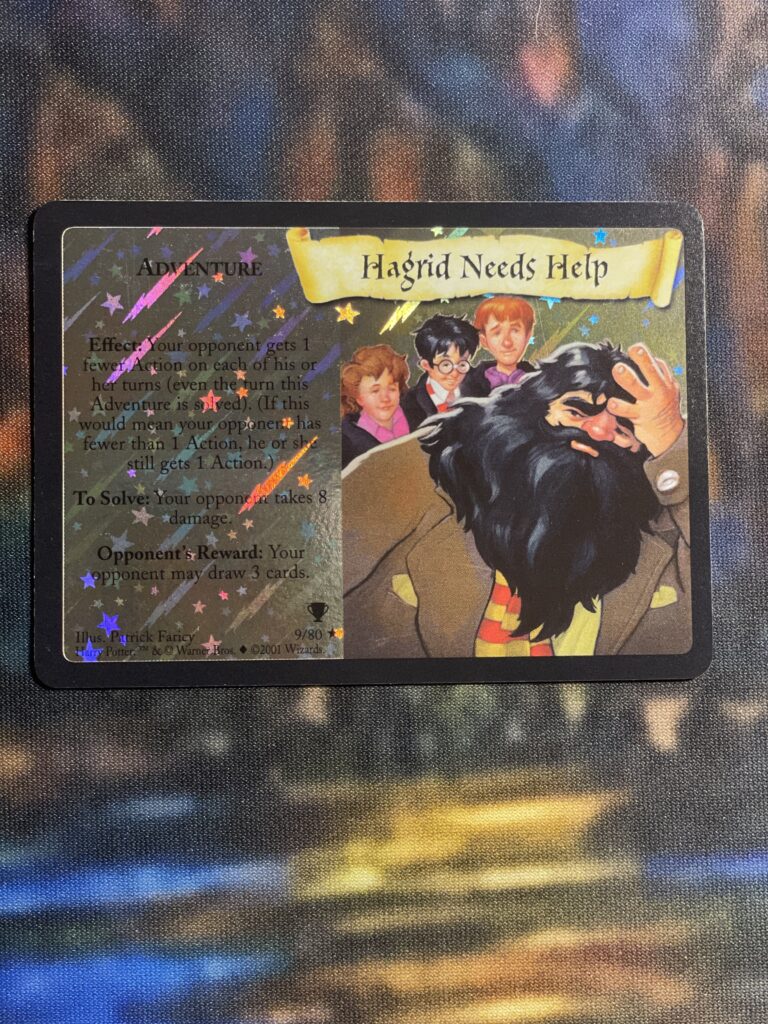 Candy Cart, Hagrid Needs Help, Through the Arch, Riding the Centaur, and Meeting Fluffy are just a few Adventures that you can find in the Harry Potter TCG. An Adventure is broken down into three parts; Effect, To Solve, and Opponent’s Reward. You read these three sections to your opponent when you play the card, and it gives them all the information they need to know about it. Your opponent can then decide to either solve it right away when their turn is up or keep it in play.

Let’s take Through the Arch as an example. The Effect reads: “Your opponent can’t play spell cards. To Solve: Your opponent skips a total of 4 Actions (those Actions don’t need to be one right after the other), Opponent’s Reward: Your opponent may put an Item card from his or her discard pile into his or her hand.”

The most crippling thing about this Adventure is that for your opponent to solve this and get it off the table to play spell cards, they need to skip four Actions! Why is this bad? Remember that you only get two Actions to do anything you want, from drawing a card to playing lessons. If you have to skip four of them, allow your opponent to get ahead of you for two whole turns. As the Adventure states, you don’t have to skip those one right after the other. However, the goal of this is to slow you down since most people have Spell cards in their decks they need to play to win.

Once you solve this and skip four Actions, you are allowed to take an Item card from your discard pile and place it in your hand, which is sometimes a useless reward if you don’t have Item cards. 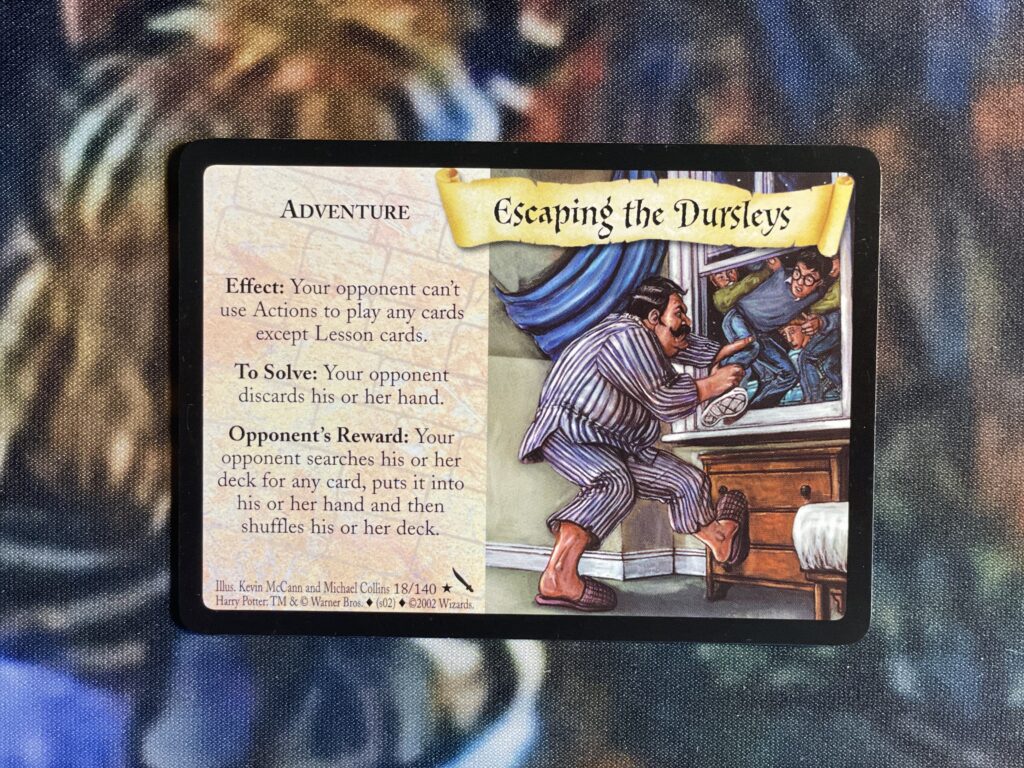 When an Adventure card is played against you, you do have the Reward to look forward to. Most of the time, they help, but then there are a few Adventures that don’t really leave a Reward at all. Let’s get into the main event here and look at Escaping the Dursleys and Caught by Snape. These two Adventures are some of the hardest to get around in the game unless you already have some cards in play that allow you to discard any Adventures – however, not all decks are built for that. Let’s see where these two Adventures take you.

Effect: Your opponent can’t use Actions to play any cards except lesson cards.

To Solve: Your opponent discards his or her hand.

Opponent’s Reward: Your opponent searches his or her deck…. 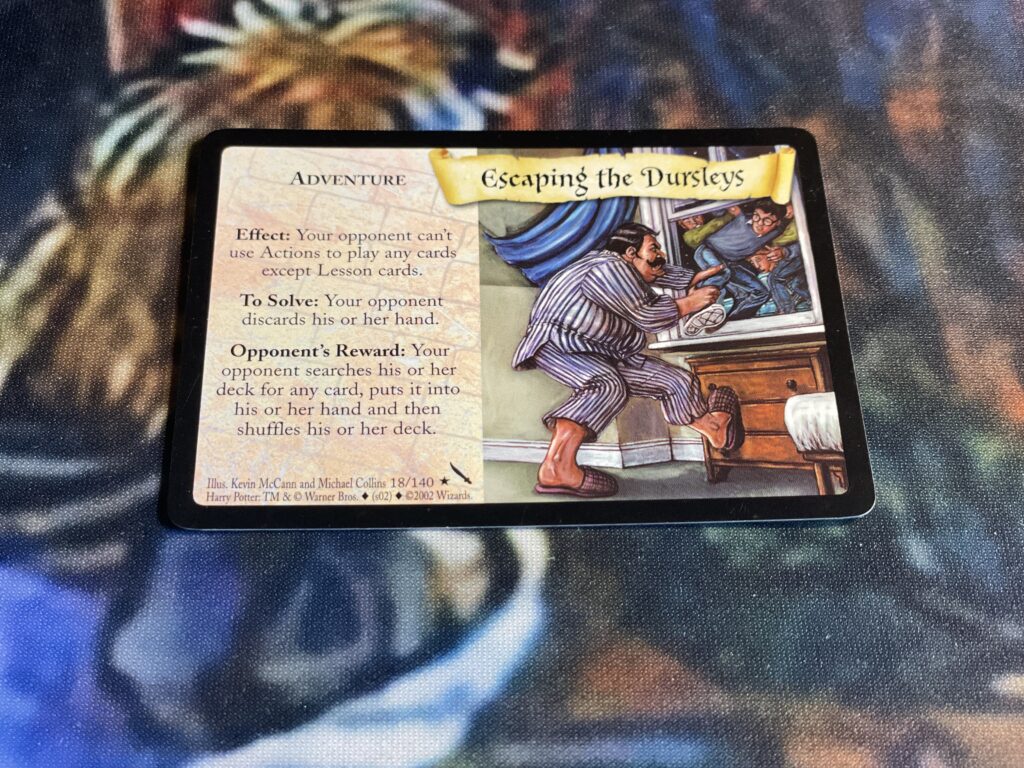 As we know, the game’s objective is to deplete your opponent’s deck, having them draw their last card until you win. You do this by playing a combination of cards that damage your opponent or make them draw until they have no more cards. This is done with various spells, creatures, and even other Adventures. For you to play these cards that are needed to defeat your opponent, however, you will need to use Actions. Because you are only allowed two Actions each turn, they must be spent wisely. So, when Escaping the Dursleys is played, and it only allows you to use Actions to play lessons, this causes an issue. Although you need lessons to play the spells, creature, or Item cards needed to defeat your opponent, the only way you are allowed to do this and get rid of the Adventure is to discard your hand.

This consequence is often what makes your opponent play Escaping the Dursleys. If it’s done at the right time in the game, you will have a significant number of cards in your hand and enough lessons to play said cards. However, you need to get rid of them to solve the Adventure so they won’t be of any use to you.

The Reward is decent and can sometimes be a double-edged sword for the opponent who plays the Adventure. If you do have that one card needed to play and win the game, then you are allowed to search for it and use your actions to play it. Again, this can be detrimental to the player who played Escaping the Dursleys, but it’s still very much worth playing as it slows your opponent down and rids them of some really good cards in their hand. This Reward is much more doable when compared to the Reward given with Caught by Snape. 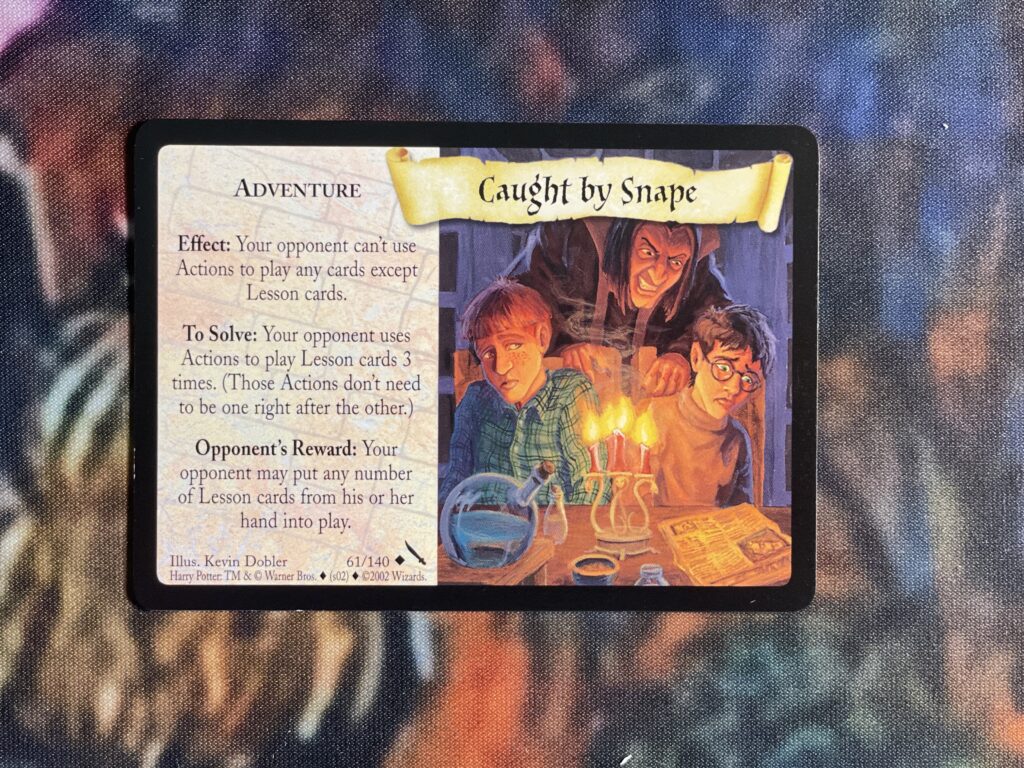 As you can see, the Effect of Caught by Snape is the same as Escaping the Dursleys. However, it’s the way to solve the Adventures that makes this card a brutal one. If this card is played at the right time in the game, you may not be able to solve this at all. Oftentimes, players prepare for this and keep a few lessons in their hand. However, this is not always possible.

Caught by Snape can easily be a game-ender since the way to solve it makes you use three actions to play lesson cards. If you have not prepared for this, your only option is to continue drawing cards hoping that you draw a lesson and can play it with an action. Even if you have prepared for it, that is still one and a half turns, which allows your opponent to play some brutal spells or put some creatures in play that will do more damage to you while you are stuck.

Once you solve Caught by Snape, your reward is to put as many lessons from your hand into play without using actions. This might sound great if you are trying to stack up those lessons to play some heavy costing cards; however, if you put the remaining lessons in play and your opponent plays yet another Caught by Snape, then you are definitely even further away from solving that second one. It is okay not to accept that reward, which many players do. This is also what makes Caught by Snape a brutal card, seeing as you get slowed down and go through all of that just to end up with no reward at all.

There are a couple of cards in the Harry Potter TCG that allow you to get rid of the Adventure your opponent played. There are some Character cards as well as some spells. The spells, however, are not going to do you any good with these two cards because, remember, you can only use actions to play lessons. If, however, you have a character card like Professor Minerva McGonagall as your starting character or in play, she allows you to “Discard the Adventure your opponent has played.” If you use this character’s ability, it can only be done once, so you need to make sure it’s at the right time. If you use this to solve the Caught by Snape, who is to tell whether your opponent will just play another one that you are then forced to solve? It could be worth a try, though, because your opponent may not have another one in their deck.

Both of these adventures are worth having in your deck and definitely worth keeping in mind for when you go against any opponent. When building decks, add cards in your deck that can be of service to you for when the time comes that you are up against a Caught by Snape or Escaping the Dursleys; you want to make sure you can get around this if possible, and for these, it’s mostly going to be a Character card to help you out. 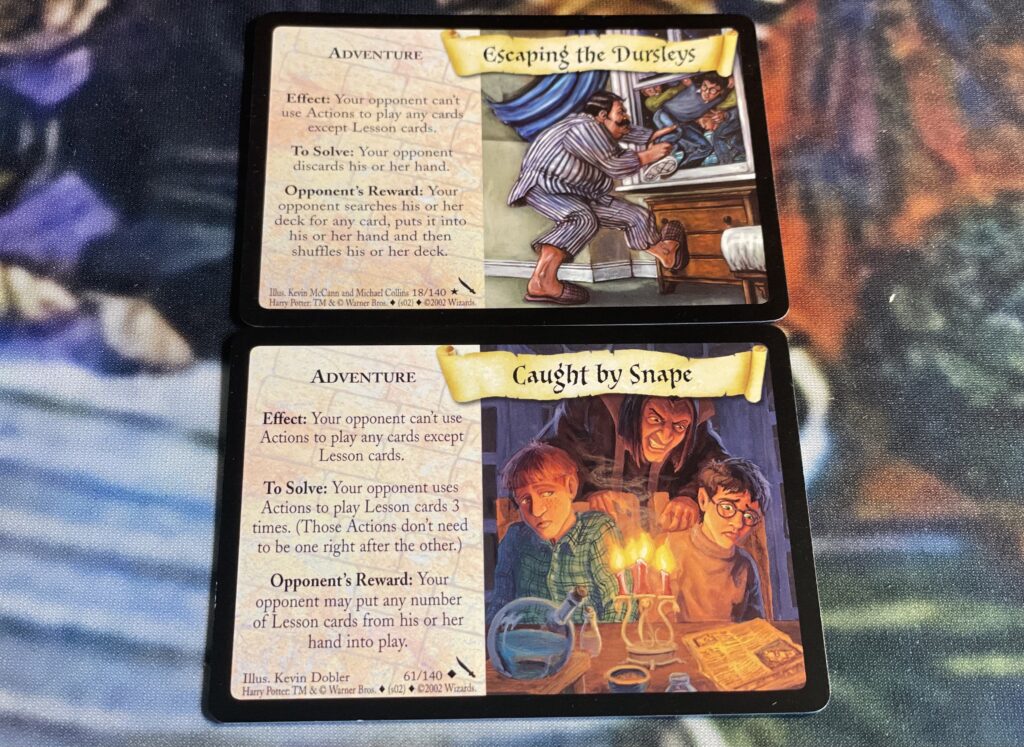 Keep in mind, if you do have a character like McGonagall that can help you with Adventures, make sure to use their ability at a good time. You wouldn’t want to Escape the Dursleys just to turn around and be Caught by Snape, would you?

If you are interested in playing the Harry Potter TCG using physical cards, please consider joining the Into the Floo HPTCG Dueling League Discord, where we play via webcam with friends worldwide. If you don’t have a deck, hit me up on Instagram, where we can talk about your options for getting one.