The first Lumos Global Virtual Gala raised funds for the nonprofit’s mission of placing children with loving families, not in institutions. The event, held on October 2 and hosted by Alec Baldwin, was streamed online to an audience who had purchased tickets and featured appearances by Harry Potter stars and an exclusive reading by J.K. Rowling.

It’s estimated that 80% of children in orphanages have at least one living parent. Lumos CEO Peter McDermott cited that staggering statistic during the gala, saying that it is the mission of Lumos to reunite families and offer support to caregivers so that children can remain at home instead of being placed in an institution.

Lumos, founded by Rowling back in 2005, works in countries around the world. According to the Lumos website, the organization has been able to keep over 31,500 children out of harmful institutions and is currently carrying out its mission in 11 countries.

During the online event, actresses Bonnie Wright, Evanna Lynch, and Noma Dumezweni, the latter of which portrayed Hermione Granger in the West End and Broadway productions of Harry Potter and the Cursed Child, highlighted the stories of three different children and their families, brought together due to Lumos programs.

Evanna Lynch introduced attendees to Mama Maria and Little Maria, a foster mother and daughter pair in Moldova, brought together when they each needed the other one the most. Mama Maria decided to become a foster parent when her own children had grown and left the house. Young Maria was born with cerebral palsy and left in an orphanage when her parents could not care for her. Now, Little Maria is thriving under the care and love of Mama Maria.

Bonnie Wright told attendees how a family in Colombia was reunited after a traumatic separation during which the mother, Gloria, was struggling to find work and her children were put in an institution. In Bulgaria, Isus, a child with disabilities, was put in an overcrowded institution, where he never even got to see the outdoors or leave the windowless room. He was rescued by his foster mom, Dima. Noma Dumezweni shined a light on their story and how Lumos had to step in to provide Dima and Isus with extra assistance during COVID-19 shutdowns. 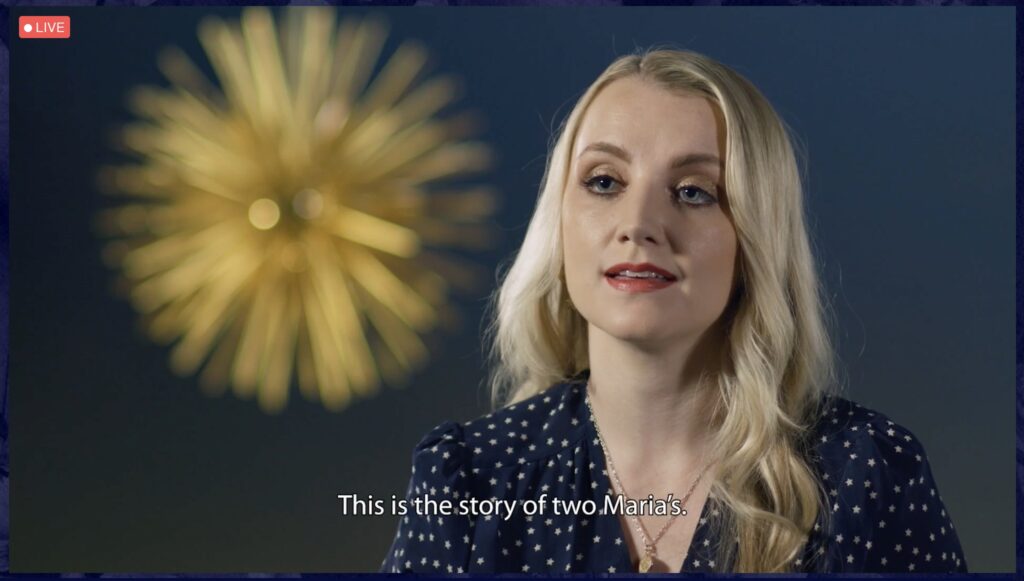 Evanna Lynch, Bonnie Wright, Noma Dumezweni, and Jason Isaacs all made appearances at the gala.

Jason Isaacs, the actor who portrayed Lucius Malfoy in the Harry Potter films, also made an appearance. Isaacs voiced his support for the organization by urging attendees to purchase Lumos shirts, the proceeds of which go into the nonprofit’s coffers.

Gala attendees were treated to the first-ever global reading of “The Tale of the Three Brothers” from The Tales of Beedle the Bard. Rowling originally wrote and illustrated seven copies of Beedle the Bard, with one being auctioned off for $3.98 million, the proceeds going to Lumos. The collection of short fairy tales was then published for the general public in 2008, with money from sales once again benefitting the charity.

My vision is that every child grows up in a loving and safe family.

The event included a tribute to late Scholastic Inc. CEO Richard Robinson, who passed away in June. Lumos has named an award in his honor: the Richard Robinson Illumination Award for Self Advocates. Rowling presented the award to members of the youth advisory boards that help steer Lumos.

The virtual gala was an hour-long event, during which attendees were able to make monetary pledges. Pledges and messages cycled at the bottom of the screen throughout the duration, with amounts varying from $10 to $10,000. Donations are being matched by Neil Blair, Rowling’s literary agent and Chair of the Lumos Board of Trustees.