Luna Lovegood: Not As Loony As You Might Think

Nargles, Wrackspurts, Gulping Plimpies, and many other creatures that some people do not believe exist, Luna Lovegood has seen them all. From the known to the unknown, Luna can always tell something is hanging around you. As bizarre as her thinking is, this dreamy girl is curious about everything, from vampires to Crumple-Horned Snorkacks. Although she is a bit loony, the imaginative blonde goes on to become a very successful wizarding naturalist in the end and marries Newt Scamander’s grandson Rolf. Talk about connections!

My mum always said things we lose have a way of coming back to us in the end. It’s not always in the ways we expect.” (OotP)

From her absurd sense of style to her strange way of talking, Luna has garnered considerable attention from Wizarding World fans since many of us can compare ourselves with her eccentricity and her ways of seeing beyond the ordinary. Added to that, though Harry’s friends try to believe him in certain unusual situations that he finds himself in, Luna is always the one to be able to see and hear things that Harry does, helping him handle public embarrassment occasionally.

Due to her extremely airy-fairy nature, she was also teased to the point of being called “Loony Lovegood.” Although she doesn’t really call anyone out on it and pretends not to hear it, the Ravenclaw is usually hyperaware of her surroundings and knows everything that people say around her. The flip side of this is that she is someone whom you can easily be friends with and joke with without worrying if she will get offended.

Harry and Luna share a special bond, and she has tried to help the Chosen One and his friends on several occasions. She is a gentle and genuine person who can go to great heights to help those whom she believes in. Even when she did not know Harry completely, she gave him a platform in the form of her father’s newspaper, the Quibbler, to tell people his story about Cedric’s death and Voldemort’s return. Intuitive and smart, she was the only one to recognize Harry when he was disguised under Polyjuice Potion at Fleur and Bill’s wedding. Her unusual demeanor also leads her to become friends with unusual people. One such friend of hers was Helena Ravenclaw, a.k.a. the Gray Lady, who helped Harry find Rowena Ravenclaw’s diadem, leading him to destroy the Horcrux. Luna is the sort of person you might initially find very strange but would love after getting to know a little. This further proves that what is inside is what truly matters.

‘It’s all right,’ said a dreamy voice from beside Harry as Ron vanished into the coach’s dark interior. ‘You’re not going mad or anything. I can see them too.’

‘Can you?’ said Harry desperately, turning to Luna. He could see the bat-winged horses reflected in her wide, silvery eyes.

Although she fails and gets tricked by others on several occasions, she tries to be helpful as much as possible. Her unique ways of presenting herself always get stored in other people’s minds. This also leads her to gain a special place in the lives of many; for example, Harry and Ginny’s daughter, Lily Luna Potter, is named after her. She’s someone who will listen to your stories, judge whether they’re right or wrong – even correct you – and give you really interesting explanations – perks of being born into a publishing household. 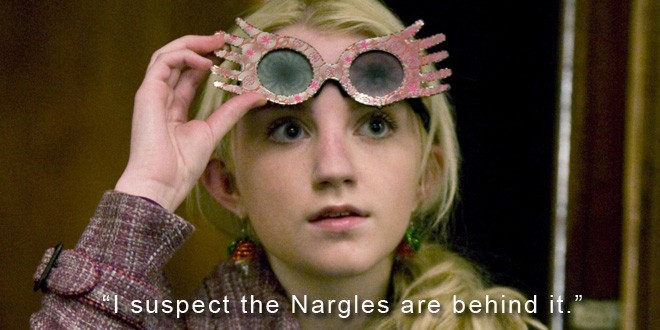 She may not be as intellectual, book smart, and factual as Hermione or brave and fiery like Ginny. She might still live in a world of imagination, but she is selfless, wise, committed, and a friend you can rely on. She is a person who can inspire you in many ways while being a bit eccentric. Luna is someone you can always count on and have deep conversations with while having fun at the same time. Also, let’s not forget that she is the person to learn sassy quotes from. Because what is the point in being exceptionally ordinary?