UPDATED: “Cursed Child” and “Fantastic Beasts: The Wonder of Nature” Affected by Temporary Closures Due to COVID

The COVID-19 pandemic isn’t over yet, and the current surge in cases around the world due to the Omicron variant has led to temporary closures for Harry Potter and the Cursed Child in New York and Fantastic Beasts: The Wonder of Nature at the Natural History Museum in London. 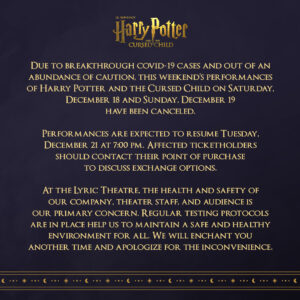 Similarly, across the Atlantic, London’s Natural History Museum has had to close temporarily due to staffing shortages caused by the pandemic, according to Reuters. The museum will be closed from December 21 through December 27, with plans to reopen on December 28. This means that those planning to visit Fantastic Beasts: The Wonder of Nature, housed at the museum, will not be able to do so. The website for Fantastic Beasts: The Wonder of Nature also notes the closure.

If you have tickets during this time, they will be cancelled and refunded. We apologise for the inconvenience and disappointment. We plan to reopen on Tuesday 28 December. The exhibition closes on 3 January 2022. There are a limited number of tickets available if you would like to book for 28 December – 3 January.

The statement goes on to provide contact information for those holding Gift Aid tickets.

Are you worried that your Wizarding World-related plans will be affected by the pandemic? Tell us your thoughts in the comments below.

The Broadway production of Harry Potter and the Cursed Child will not be resuming its performances as planned on December 21. A new update from the production has announced that the show will remain dark from Tuesday, December 21, through Monday, December 27. 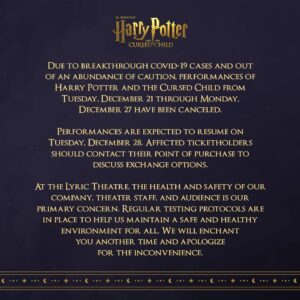 Performances are now expected to resume on December 28, and those with affected tickets should contact their point of purchase.