According to a news report from Hansons, the winning bid for that copy came from an online bidder in the United States. The seller was reportedly pleased with how well the copy did at auction and was quoted by Hansons.

I’m very pleased with the result. Though it was a very good copy, the book wasn’t quite perfect. It won’t pay off my mortgage, but it will go a long way towards it!

Meanwhile, the copy of Philosopher’s Stone that was originally purchased for just £0.50 might look a bit rough around the edges, but Hansons reports that this “shabby” copy was sold for £15,500 despite its maximum estimated value of £3,000. (Interestingly, this one also went to an online bidder in the US.) Hansons contrasted the two copies in its report on how well the shabby copy did.

By contrast, in the same sale Hansons offered a pristine copy of the same book with an estimate of £40,000 to £60,000. It’s [sic] owner, a books collector, kept it in darkness to protect it from the light, within a protective cover, for 25 years before deciding to sell. It sold for a hammer price of £69,000 to a private international buyer. 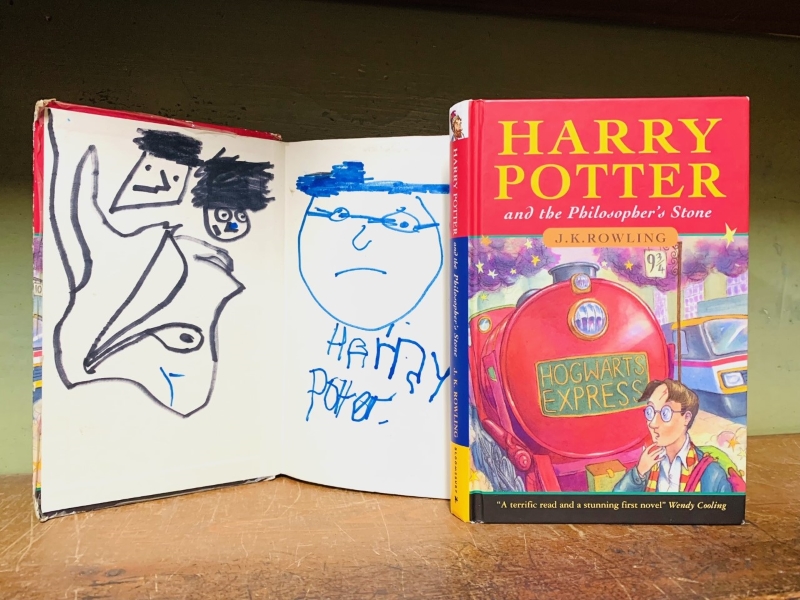 The shabby and pristine “Potter” books side by side

A pristine first edition of the most valuable Harry Potter book ever published, kept in darkness, unread and in a protective sleeve for 25 years, has sparked an auction bidding battle.

Online and phone bidders competed to buy the ‘as-good-as-new’ hardback copy of Harry Potter and the Philosopher’s Stone, one of only 500 in the first[-]ever Potter book print run in 1997.

The seller, a retired paper merchant director, 68, from West Sussex, said: “I’m very pleased with the result. Though it was a very good copy, the book wasn’t quite perfect. It won’t pay off my mortgage but it will go a long way towards it!”

Jim Spencer, books expert at Hansons, said: “I’m delighted for our vendor. It’s certainly a good return for the £12.99 he paid for the book – and he nearly asked for his money back because he thought it had a fatal flaw.”

“It didn’t have a dust jacket, and I thought it should,” said the seller, who pre-ordered the book from Leatherhead Bookworm in Surrey in 1997. “I was really disappointed when I went to pick it up. I’m a collector, and being a first edition, I expected it to have one. I decided to keep the book on the toss of a coin. It was a moment of destiny.”

Years later, he discovered that Philosopher’s Stone hardback first issues don’t come with a dust jacket – so his copy was as good as it could be.

The retired paper merchant director, 68, from West Sussex, said: “Leatherhead Bookworm, one of those magical old books shops, no longer exists, but I still hear from the man who sold me the book. He likes to remind me that I nearly had my money back just because it didn’t have a slip cover [sic]. I remember standing in the doorway debating whether to keep it.

“I took it home and tucked it away in darkness on a high book shelf [sic] [not only] to keep it from prying eyes but [also] more importantly, because the paper in the book is poor quality. I was told to keep it away from sunlight to prevent it [from] going brown.

“I bought that first issue of Philosopher’s Stone because I noticed an advert for it in a magazine called Bookseller in 1997. It compared JK Rowling’s book to the Famous Five novels and predicted it could be a prize winner. I loved reading Enid Blyton’s Famous Five books when I was a child – and I liked them to have a dust jacket!

“I’ve really looked after it. It’s in the best condition it possibly can be – almost perfect, I would say. It’s never been read. A year after I bought it, with Harry Potter excitement growing at my daughter’s school, she asked if she could read it. I said no, absolutely not.

“My daughter’s copy of Philosopher’s Stone was a fourth issue – with a dust jacket. So I put that on my first edition to protect it and tucked it away together with my Chamber of Secrets first edition, also protected by the slipcase. They have always been kept separate from my main books collection and hidden in the house.

“I started collecting books in my 40s. I worked for a paper company and mixed with people in the books’ fraternity. I used to go out at lunchtime looking for rare finds and got hooked.

“In recent years, I noticed Philosopher’s Stone first editions were selling well at auction, but as mine didn’t have a dust jacket, I didn’t think it could achieve those prices. Eventually, I realised a dust jacket was not specified. It’s not been easy to part with it, though. Collectors have difficulty selling their prized possessions.”

Mr Spencer has sourced and sold 16 hardback first issues of Philosopher’s Stone to date with prices achieved ranging from £15,500 to more than £60,000 dependant on condition.

“This is the highest hammer price we have achieved so far and deservedly so,” he said. “It was the best hardback first edition of Philosopher’s Stone I have ever seen.”

A first edition of the rarest Harry Potter book ever published could sell for thousands of pounds despite being covered in children’s doodles – and it only cost 50p!

The hardback copy of Harry Potter and the Philosopher’s Stone, one of only 500 in the first Potter print run in 1997, was bought from a Manchester charity shop last November. Not only is it in well-thumbed condition, [but] it’s [also] filled with a child’s scribbled drawings of the boy wizard.

The seller, a Manchester businessman who wishes to remain anonymous, said: “I didn’t realise it was a first edition when I bought it. I just spotted the back cover with the image of the wizard and thought it looked interesting. It was only 50p. I found it in one of those traditional charity shops packed with boxes.

“Around Christmas time, I decided to contact Hansons Auctioneers to check whether it was a first edition. They confirmed that it was - a nice surprise, to say the least.”

Despite its shabby condition, the book is set for auction at Hansons on March 9 with a guide price of £2,000 to £3,000. Still a tad shell-shocked by the valuation, the seller said: “I live in hope!”

By contrast, in the same sale, Hansons is offering a pristine copy of the same book with an estimate of £40,000 to £60,000. It’s [sic] owner, a books collector, kept it in darkness to protect it from the light, within a protective cover, for 25 years before deciding to sell.

Jim Spencer, books expert at Hansons, said: “In essence, we have two first[-]issue hardbacks - one carefully preserved and unread, the other thoroughly enjoyed and read to death.

"When it comes to condition, we're looking at two very different books. One is like new, as good as it gets. The other has been read until it broke, enjoyed countless times, even joyfully illustrated by its young fan.

"The question is, which one was loved the most? Or enjoyed the most? Arguably, the damaged one tells its own important story. I always like to imagine historians of the future gazing at something like this, the doodles and naive fan art, the evidence it was read over and over again - it would surely give them a true sense of Harry Potter fever.

"Ordinarily, condition is everything to book collectors, but people who grew up with Pottermania don't necessarily see bumped corners or peeling laminate - they see history.

"That said, 300 of the 500 first issues were sent to schools and libraries, and it was ultimately a children's book, so a premium is certainly going to be paid for anything in reasonable condition. The near-perfect example is a remarkable survivor and could well sail [sic] [for] close to £100,000.

“The doodled version has a humble starting price of £2,000 to £3,000. I suppose it’s a lesson in what not to do with a Harry Potter first edition – don’t scribble all over it [and] then give it away. But the people who originally owned it would have had no idea of its potential value today. It was bought for a child to enjoy and love.

“As for the seller, his first edition may not be worth tens of thousands of pounds, but it could still make him a sizable return on a 50p investment. Plus, it gives people hope – those Potter first editions are still out there; keep looking. He only found it last autumn.

“The first hardback Philosopher’s Stone I uncovered for Hansons was bought for £1 at a table top [sic] sale in Staffordshire. This 50p Manchester find is the biggest bargain yet. It will be fascinating to see what it achieves.”

Given the chance, would you purchase a rare Harry Potter book? Tell us your thoughts in the comments below!