Return to the Magic Where the Magic Is Made: Watch “Secrets of Dumbledore” at Warner Bros. Studio Tour London

We’re less than a month away until we can finally return to the magic on the big screen. Fantastic Beasts: The Secrets of Dumbledore will be opening in April, and we simply can’t wait. To further increase our anticipation, Warner Bros. is revving up its marketing machine and unveiling more goodies. For those Potter fans who live in or around London, England, not only will you be getting the movie a week before those in the United States, but you’ll also have a chance to watch the flick in the actual studio in which it was made. Warner Bros. Studio Tour London – The Making of Harry Potter will be screening Secrets of Dumbledore during its opening weekend in the United Kingdom.

From April 8 to April 11, Londoners will be able to purchase a wonderful package that includes admittance into Warner Bros. Studio Tour London as well as a screening of Secrets of Dumbledore. Not only that, but the package also includes a souvenir green screen photo, a meal at the Backlot Café, and a snack to enjoy during the screening. Even more, each showing of the movie will include an introduction by the head of department prop maker, Pierre Bohanna, along with a Q&A. Overall, the package sounds like an incredible experience for any Potter fan. Not only will you be returning to the magic, but you will also be at the studio in which the magic is made and speak with a wizard who helps make the magic. Tickets are priced at £149 for adults and will be available for purchase on March 24.

Join us to watch #SecretsOfDumbledore at the home of the Harry Potter films with exclusive screenings at the Studio Tour this April.

While those of us in the US can’t experience the movie at Warner Bros. Studio Tour London without crossing the pond, we can still have a great experience watching the flick. Secrets of Dumbledore will also be released in IMAX theaters, which offer wider screens, clearer images, and more enhanced, booming audio compared to your standard movie theater. And Warner Bros. recently unveiled a gorgeous poster to remind us of the IMAX release. 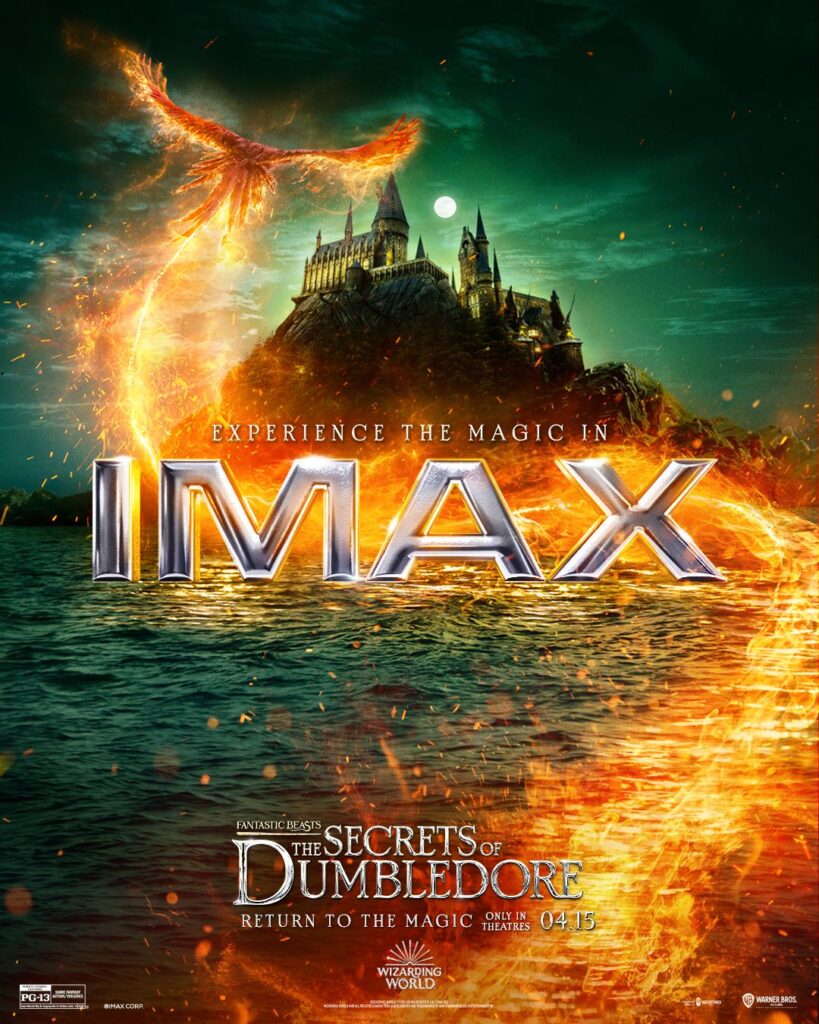 “Fantastic Beasts: The Secrets of Dumbledore” will be released in IMAX theaters on April 15.

The new IMAX poster appears to be very similar to a previously released poster, featuring Fawkes flying toward Hogwarts. Aside from much more vibrant colors and a path of fire left behind by Fawkes, the biggest difference is that Hogwarts Castle seems to be illuminated by the moon whereas, in previous posters, the castle glimmered in the sun.

And since we are getting closer to the movie’s release, Warner Bros. has released two new Chinese posters featuring entirely different imagery. Instead of selling nostalgia with Hogwarts, these posters are selling a wizarding war between Grindelwald’s cult and Dumbledore’s army. 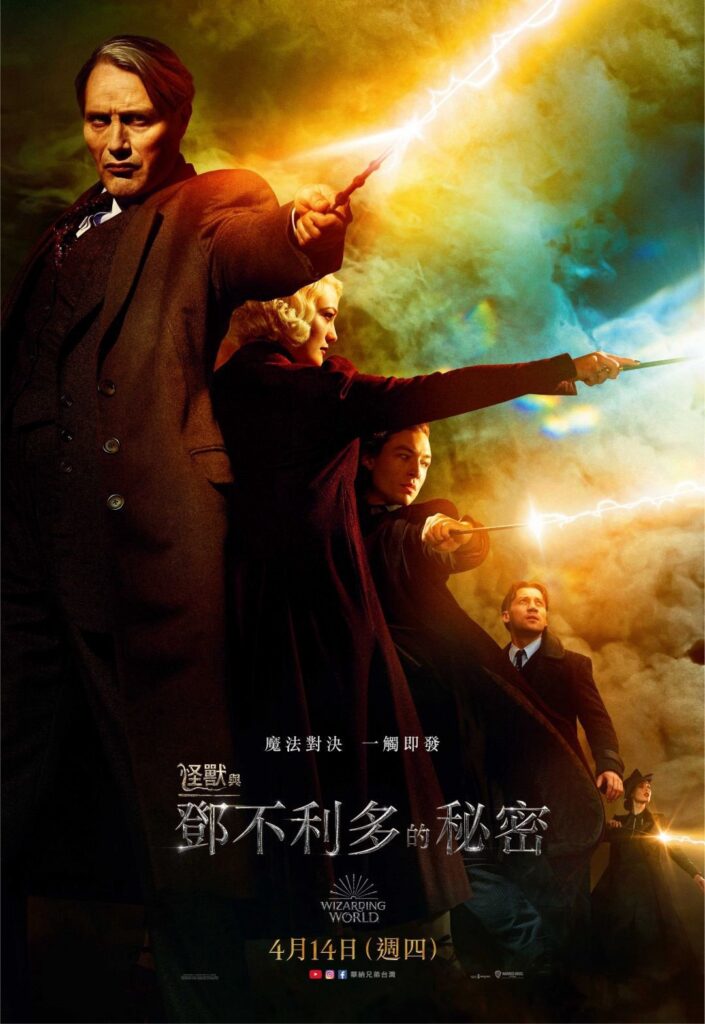 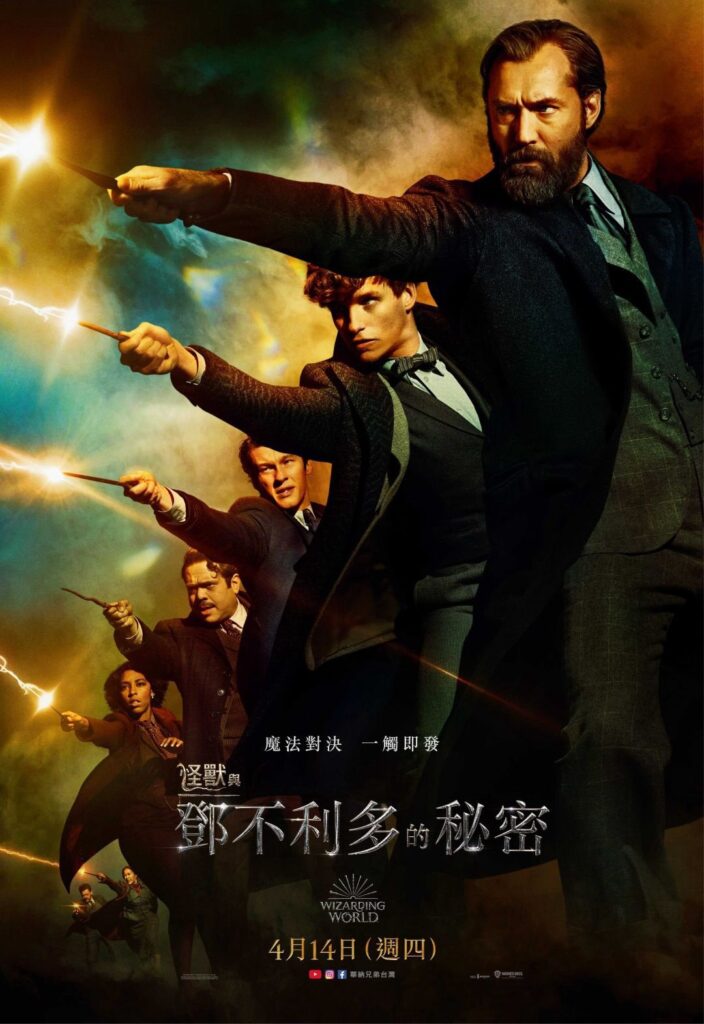 The two Chinese posters depict Grindelwald’s cult and Dumbledore’s army aiming their wands at each other in what looks like a wizarding war.

To have these posters on display side by side would really make great decor for any Wizarding World fan. It’s interesting to note that Jacob’s wand is the only one that isn’t emitting a spell. The latest trailer made us believe that Jacob was actually performing magic, but this poster seems to say otherwise. There are only a few more weeks of speculation before we finally find out what’s going on with Jacob and that wand.

Fantastic Beasts: The Secrets of Dumbledore hits theaters on April 8 in the UK and April 15 in the US.

Will you be watching Secrets of Dumbledore at Warner Bros. Studio Tour London? Do you have any questions for Pierre Bohanna? Do you think Jacob will actually cast a spell? Let us know in the comments.