Castium Revelio: Give “Ten Percent” and Take a Break

Welcome to this week’s Casting News! After the awards news of the past few weeks, we’re back to our usual trailer drops, casting news, and more. This week we head to the Upside Down, visit the South of France with the Crawleys, listen to new music, and view portraits that remind us to take a break for our mental health. Castium Revelio!

First up, there is a rumor that Emma Watson may be attached to a Turkish Disney+ series. There is little information about Atatürk, and so far there are limited sources reporting the rumor, but we'll keep you updated. One thing we do know is that Watson recently visited Sudie L. Williams Academy in Dallas, Texas, to talk to students about acting and the film industry. 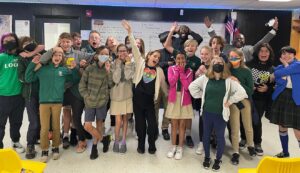 Next up, David Tennant (Barty Crouch Jr.) has been cast in a BBC Radio 4 production of Macbeth. The play will be broadcast on Saturday, April 23 and Sunday, April 24 at 3:00 p.m. and available to hear on demand afterward on BBC Sounds. This won't be Tennant's first foray into Shakespeare – he most famously played the titular role in Hamlet on stage in 2009.

Sir Michael Gambon's (Albus Dumbledore) horror-thriller Cordelia has been picked up by Screen Media for release in the United States. Having already been released in the United Kingdom in 2020, the movie will reportedly be available for American audiences in May.

We have a behind-the-scenes look at Downton Abbey: A New Era, starring Dame Maggie Smith (Minerva McGonagall) and Imelda Staunton (Dolores Umbridge), thanks to Downton Abbey: A New Era: The Official Companion Book. The movie will hit theaters on May 20 and is said to take the Crawley family to the South of France after the Dowager Countess (Dame Maggie Smith) inherits a villa "under mysterious circumstances."

Speaking of Dame Maggie Smith, with the news that the third Sister Act movie is set to start filming soon, questions are remaining about whether or not she will return to her role as Reverend Mother. Keep your eyes on Castium Revelio to keep up to date with the latest news.

Helena Bonham Carter (Bellatrix Lestrange) and Stephen Fry (UK audiobook narrator) have taken part in the Art of London's Take a Moment 2022 campaign. The campaign features famous faces all photographed with their eyes closed in order to remind people to take a moment to look after their mental health. The images will be displayed on the screens of London’s Piccadilly Lights, and you can check out the full range of portraits in the exhibition below.

Jim Broadbent (Horace Slughorn) will star in Ten Percent, a comedy series based on the French series Call My Agent. The first two episodes will air on April 29 on Sundance Now and AMC+, and the series will contain cameos from Kelly Macdonald (Helena Ravenclaw), Helena Bonham Carter (Bellatrix Lestrange), and Clémence Poésy (Fleur Delacour).

Gary Oldman (Sirius Black) has been celebrating the release of Slow Horses, a spy thriller that debuted on Apple TV+ on April 1. When asked by Entertainment Weekly about the possibility of a second season, Oldman remained tight-lipped but made it clear that he would be up for exploring the stories, saying, "I'm hoping that people like it enough that the big people up there on the top floor at Apple say 'We're going to do more.'" According to reports, however, it seems as though a second season of the show has already been greenlit.

Warwick Davis (Filius Flitwick/Griphook) helped open the Forever in our Hearts display at Lincoln Cathedral, created by St Barnabas Lincolnshire Hospice, which helps families celebrate the life of a loved one with a personalized iron-heart tribute.

This week has also brought a few new clips and trailers for us to get into. The trailer for the fourth season of Stranger Things, starring Jamie Campbell Bower (young Grindelwald), has dropped. The new season will premiere on Netflix on May 27.

A new trailer has dropped for Ralph Ineson's (Amycus Carrow) upcoming movie, The Northman, which is set to be released on April 22.

We also have a new trailer for The Dry, a comedy-drama series starring Ciarán Hinds (Aberforth Dumbledore). The series will premiere on BritBox on May 5, 2022.

Jason Isaacs's (Lucius Malfoy) upcoming movie Operation Mincemeat, which is based on a true story, hits movie theaters this weekend. He explained in a Good Morning Britain interview that his character inspired Ian Fleming's character "M" in the James Bond novels.

Killing Eve has finished airing, but Fiona Shaw (Petunia Dursley) is still hard at work. She has recently finished filming a role in Andor, a Star Wars: Rogue One prequel, and is currently filming the miniseries Anansi Boys.

The Forgiven, starring Ralph Fiennes (Lord Voldemort), is set to be shown at the Sydney Film Festival in June.

Finally, Shades of Blue, a theater performance for which Alfred Enoch (Dean Thomas) is part of the creative team, will make its debut at Sadler's Wells Theatre on Friday, May 6 and Saturday, May 7.

Zoë Kravitz (Leta Lestrange) appeared on The Tonight Show. As well as talking about The Batman, Kravitz got very into a game of "Can You Feel It?" with host Jimmy Fallon.

This comes after the news that The Batman, which also stars Robert Pattinson (Cedric Diggory, Harry Potter) and Colin Farrell (Percival Graves), has received a premiere date on HBO Max. Fans will be able to stream the movie beginning April 18, and it also will air on HBO on Saturday, April 23.

That’s a wrap on this week’s Casting News! Which of these shows and movies are you most excited to watch? Let us know in the comments below.