Having previously been shown in Birmingham, an exhibition of Revelations: A Portrait of Magic launched in London, UK, on April 13. The collection of artwork by Scottish contemporary artist Stuart McAlpine Miller will be on display at the S&P Gallery until April 27, 2022, with a percentage of proceeds being donated to Lumos.

Revelations consists of 11 portraits inspired by Harry Potter, painted in a pop art style. Each painting takes a Potter character or characters as seen in promotional photography for the film series and adds layers of emphasis, patterns, and words. A variety of Harry Potter book covers also feature throughout. There’s fun to be had in trying to identify where the different elements come from, and one soon starts musing whether some typography is more typical of the UK 2014 editions or the US originals.

At first glance, one assumes that the portraits are digital collages of all these other artworks, but every print has been created from an original painting by McAlpine Miller, which altogether took him six years to complete. His use of light and shade on the central figures is more reminiscent of renaissance masters than the Pop Art movement, and it brings them to life far beyond what was captured in the original photography. Harry’s piercing blue eyes stare back into your own, and the layering in the pieces only adds to their three-dimensionality. 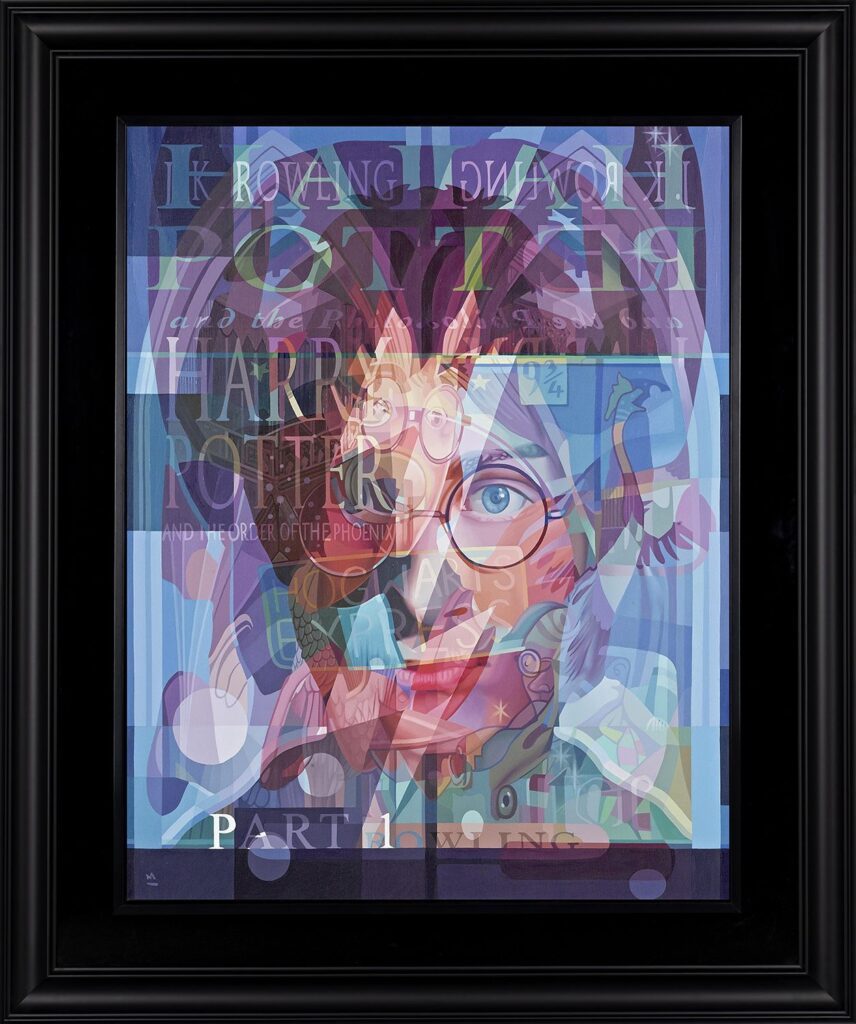 “A Complex Nature” features a front-facing headshot of Harry entangled in a dissonant array of images.

Pop art is something McAlpine Miller is known for, his style being regularly likened to Andy Warhol. It makes one reflect that in the 21st century, Harry Potter really is as ubiquitous as Campbell’s soup cans and as iconic as Marilyn Monroe when Warhol portrayed them in the 20th century. Such has the series’ impact on global mass culture been; it’s difficult to imagine there are many people in the world for whom these pieces would not be at least somewhat familiar. After being plastered on buildings and lining the shelves of stores for more than two decades, the images they’re based on are nothing short of iconic.

This iconic nature is brought up in the paintings by echoes of more traditional religious iconography with jewel tones and fragmentation suggestive of stained glass windows. Vaulted gothic architecture oft-associated with cathedrals can be seen above Harry in A Complex Nature, and a cross shape behind Snape in Hypnotic Reveal has been used to portray him as a martyr in a piece conveying his double life. 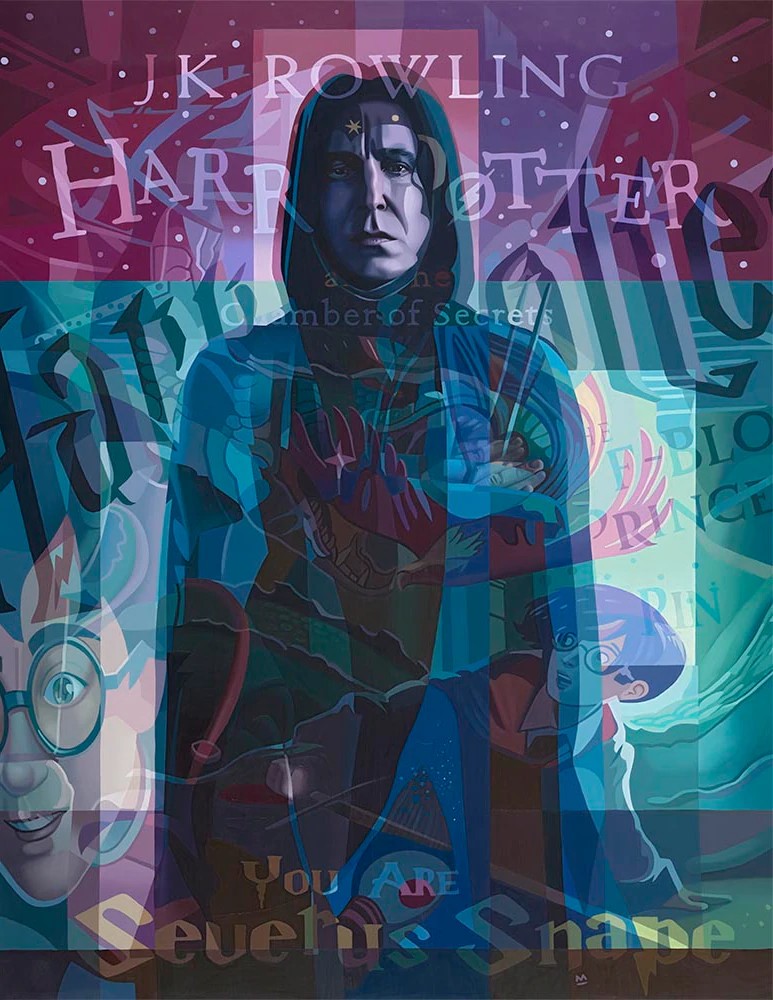 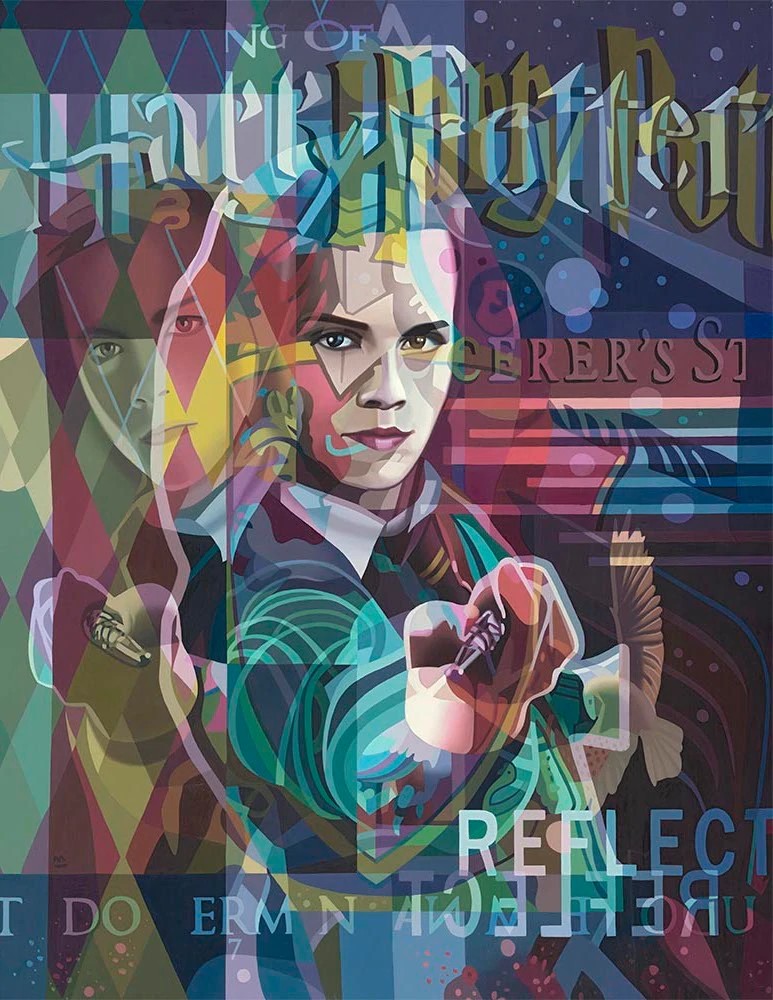 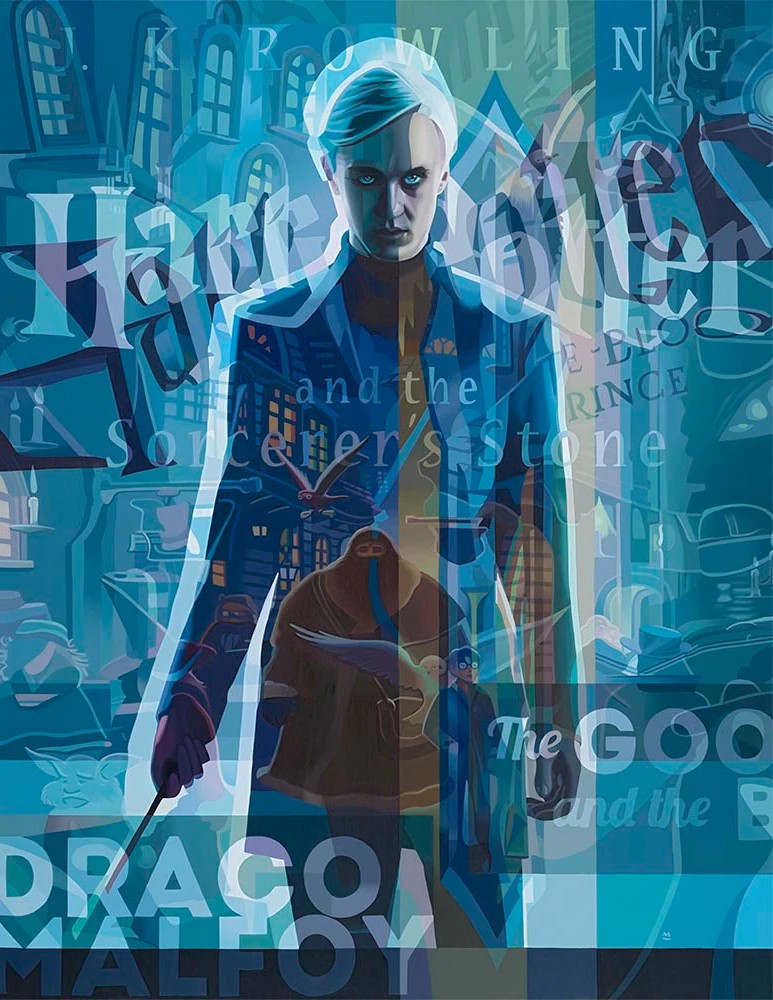 “From the Evil Within” by Stuart McAlpine Miller suggests there’s more to Malfoy than meets the eye.

This exploration of the different sides of characters is seen throughout the exhibition. McAlpine Miller has a previous successful collection entitled Lost Lives // Split Personalities, and that fascination with duality has evidently followed him into this one. This is seen most obviously in the portrait of Hermione entitled Split Personality, but also in From the Evil Within. The latter shows the shadowy form of Draco Malfoy as seen on a poster for Harry Potter and the Half-Blood Prince but with a lighter shadow behind and the phrase “The Good and the Bad” falling partly out of view, hinting that he might not be quite as black as he’s painted.

Art inspired by the wizarding world has long traversed a broad spectrum of skill and professionalism, from amateur DIY to celebrated fan artists. But Revelations: A Portrait of Magic is something practically unheard of in the world of Potter art: fully licensed by Warner Bros., who are not exactly known for their laidback attitude to their copyright. One wonders if this is the start of something new for this franchise and if we can expect more such collections in the future.

Revelations: A Portrait of Magic is on display at the S&P Gallery, 58 Gloucester Road, London, until April 27, 2022. Limited edition prints of the pieces in the collection are available to purchase in person or online, beginning at £2,100 (approx. $2,755). 10% of every net sale price will be donated to the Lumos Foundation.