With another addition to the Wizarding World franchise, it’s inevitable that there’s going to be merchandise, and we have even more to share than the official companion book to Fantastic Beasts: The Secrets of Dumbledore.

First, let’s start with Secrets of Dumbledore. While we can’t cover everything, there’s so much that we have a press release included at the end of this piece for your perusal. Among the highlights, however, are new clothing and accessories at Hot Topic, a collaboration with LeSportsac, furry friends coming soon to Build-A-Bear Workshop, and fun finds at Universal Orlando Resort and Universal Studios Hollywood. (The baby Nifflers who made their debut in Fantastic Beasts: The Crimes of Grindelwald were also spotted at Universal Orlando Resort – in plush form.) 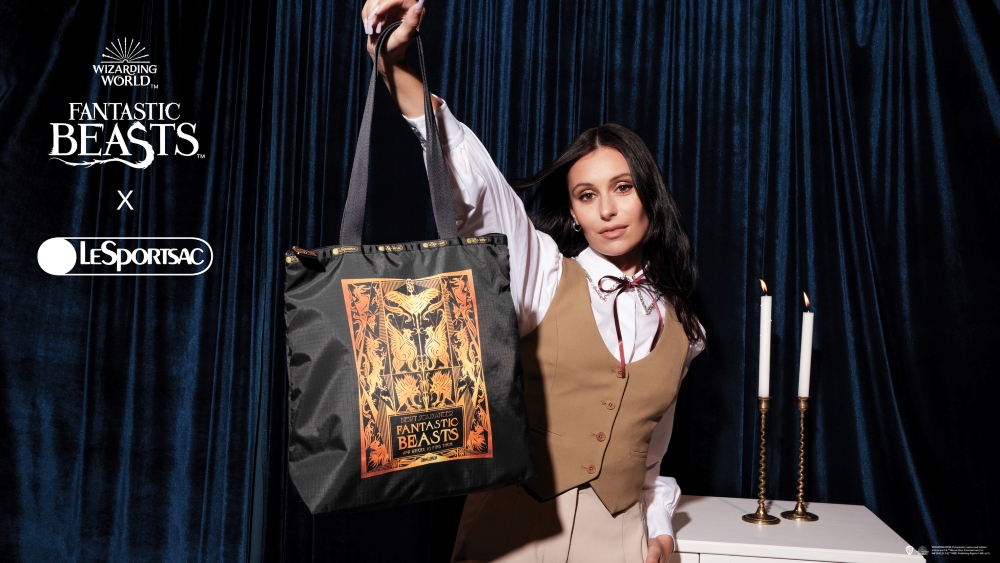 Universal Parks & Resorts hasn’t forgotten about the Harry Potter series, either. Some of the items fans have spotted in Orlando include a Dobby figure; a Diagon Alley Loungefly backpack, purse, and wallet; and even a clock inspired by the Hogwarts Express. Over in Hollywood, there’s also lots of Hogwarts Express merchandise, including a collection of accessories first spotted at Universal Orlando Resort.

LEGO, Spin Master, and Beyond

In the toy department, there’s also lots of news to share. LEGO has multiple Harry Potter sets that are newly released or soon to be released, including the upcoming Hungarian Horntail, available for preorder on May 3. Spin Master is also planning to release some Wizarding World toys this year, including a new playset coming in the fall.

Merchandise Across the Pond

Meanwhile, across the pond, fans can find a new collection of Harry Potter items for dogs at Primark, as shown in the Facebook post below.

For the humans, Marks & Spencer has a white chocolate Easter egg that looks like the golden egg from Harry Potter and the Goblet of Fire. It can be purchased online for £16.

Which items of magical merchandise are you most excited to buy? We’d love to hear your thoughts in the comments.

Press Release
WarnerMedia Global Brands and Experiences Unleashes New Products and Experiences to Celebrate the Newest Chapter in the series, the upcoming Fantastic Beasts: The Secrets of Dumbledore

BURBANK, CA, April 6, 2022 — WarnerMedia Global Brands and Experiences will launch a spellbinding collection of products to help fans celebrate the magic of the highly anticipated Warner Bros. Pictures film Fantastic Beasts: The Secrets of Dumbledore, debuting in theaters in the UK on April 8th and in the USA April 15. Allowing wizards, witches and Muggles everywhere to relive unforgettable Fantastic Beasts movie moments and engage with the new adventure, the collection includes fashion, toys, home goods and themed experiences from partners around the world.

The new collections and events offer something for explorers of all ages, whether their interest is in the fantastic characters and beasts, filmmaking or fashion. With products featuring patterns and prints inspired by Newt’s creatures, including the adorably mischievous Niffler, and the film’s intricate global city settings, to licensed books and experiences that take fans behind-the-scenes, the new Fantastic Beasts-inspired collaborations are perfect for spring and summer adventures.

“The Wizarding World franchise is full of rich detail, beautiful settings and fascinating creatures and we have collaborated with top partners from globally to curate a Fantastic Beasts program that will allow fans of all ages to engage with their favorite on screen characters in their everyday lives,” said Pam Lifford, President, WarnerMedia Global Brands and Experiences. “These all-new products and events extend the magic offscreen and complement the vast range of offerings the Wizarding World brings to its millions of fans arounds the world. From products to parks and experiences, there is something for everyone.

As fans get ready for the new film, they can look forward to the following Fantastic Beasts: The Secrets of Dumbledore merchandise and experiences:

WarnerMedia Global Brands and Experiences’ wide range of products and events celebrating the new Fantastic Beasts film makes it easy for fans around the world to return to the magic and the beloved Wizarding World. To learn more about the upcoming film, visit www.fantasticbeasts.com.