The art of making a visually stunning film in the Wizarding World franchise requires its own special kind of magic. Speaking with the Art of VFX, Oliver Schulz discussed his work as VFX supervisor for Fantastic Beasts: The Secrets of Dumbledore, giving us new insight into the meticulous effort behind some of the film’s most impressive shots.

Secrets of Dumbledore was Schulz’s first experience working within the Wizarding World franchise, which he revealed comes with an important responsibility to maintain its legacy and continuity. He worked closely with production VFX supervisor Christian Manz and director David Yates to ensure that all the visual effects elements were in accordance with the rich history of the Wizarding World.

Christian and David also wanted to make sure that every VFX element belonged to that specific world. That starts with magic spells that have already been defined in previous films and therefore need to match exactly this visual quality and ends with specific requests about animation timings to get that little comedic element already present in the Potter films. 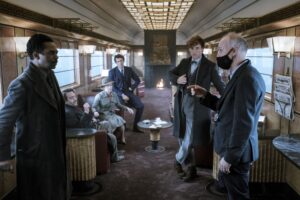 Director David Yates is shown directing the cast on the train set for “Fantastic Beasts: The Secrets of Dumbledore.”

The magic of the Wizarding World provided unique opportunities for the visual effects team to apply their skills in innovative ways. According to Schulz, some of the biggest shots were Lally’s and Jacob’s clothing transformations. These shots were also important to Manz and Yates, who “asked for all kinds of breakup and little quirks to give this transformation a character of its own” in order to maintain the distinct characteristics of Wizarding World magic introduced in the Potter films.

Another magical effect that Schulz is particularly fond of is the Portkey effect that Lally creates. In the interview, he described the creative visual effects that were utilized in this shot to ensure that the magic was showcased plausibly.

Senior FX [a]rtist Artem Smirnov created this whole effect and added all those little details like papers getting stuck on Lally and Jacob or on the facade behind them, or little water droplets being dragged out of puddles on the ground to make this effect much more believable.

Schulz and his team at RISE Visual Effects Studios were responsible for several memorable sequences in Secrets of Dumbledore. These included the Berlin arrival sequence, for which the team digitally created the Friedrichstrasse train station, and several shots of magical ministries across the globe, featuring an entirely computer-generated shot of the Chinese ministry, which had not yet been seen on-screen.

Actors take part in a scene in “Secrets of Dumbledore” before visual effects are added. 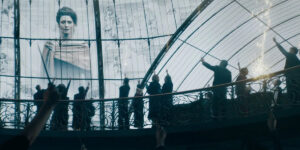 The visual effects team used their skills to create this completed scene.

Much of the visual effects supervisor’s work involved creating or expanding the film’s environment. The 1930s setting of Secrets of Dumbledore led Schulz and his team to study period references as inspiration for their set extension work. The other Wizarding World films also significantly influenced the film. “It wouldn’t be [the] Wizarding World if we [didn’t] reference Potter movies or the two first Fantastic Beasts films for certain aspects, which we did for [e]nvironments or [m]agic,” revealed Schulz. Some environmental elements featured in the New York sequences of the film were actually from the previous two films, with reworking involved where needed.

But even Muggle magic is not without its difficulties. The most challenging environmental visual effect, according to Schulz, was the Friedrichstrasse train station. “All of this was based on a scan of the original location where we integrated the set build, which was done on a soundstage,” he explained. The COVID-19 pandemic made this sequence even more complex for the RISE team. Shooting restrictions limited the number of extras that could be used in the scene, so digital re-creations called digi-doubles were created in their place.

What is your favorite visual effects moment in Secrets of Dumbledore? Let us know in the comments!