The participating teams were divided into four groups ahead of the tournament. The first day was standard group play. Based on the results and a live draw at the end of the livestream, teams were paired together for one match. These matches were played at the start of the second day and determined who would go into which bracket. There should have been three brackets – the championship bracket, consolation bracket, and lower consolation bracket – but the post from the Facebook page for the IQA European Games shows us only the upper and lower brackets.

Norway showed that it has a very strong team when it won its games against Catalonia and Belgium, only to lose to England in the semifinals. Australia had a similar experience, beating both France and Austria, except it was the game against Germany that sent Australia into the fight for third place. Norway and Australia played against each other. The score was tied in the first few minutes, but Australia quickly pulled ahead. The final score was 140–120*, and Australia won third place. It was predicted and also feared before that Australia might win one of the top three places instead of one of the European teams. 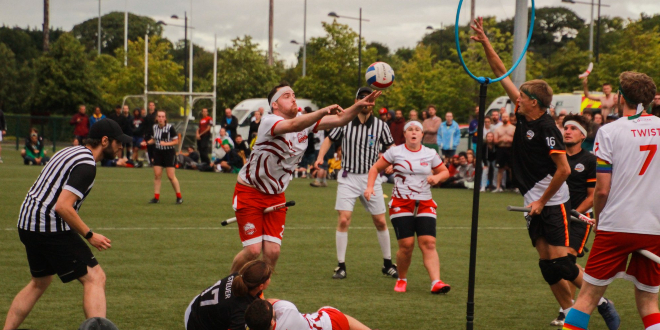 It might be the last goal in the tournament during the final game, England vs. Germany. Credit: Ajantha Abey Quidditch Photography

The match for the title was between Germany and England. England managed to score a goal early on, but Germany was never more than a few goals behind and even pulled ahead a number of times. Catching the snitch helped England tie the score. The score was 130*–130 when overtime started, and the set score was 160. England scored a few goals quickly and won with a final score of 160*–140.

The final results of the 2022 IQA European Games

The IQA and US Quidditch have additionally announced that the IQA World Cup will be held in Richmond, Virginia, on July 15–16, 2023.