Two of the most beloved New York City institutions – baseball and Broadway – are set to come together for one magical night later this month to celebrate Harry Potter and the Cursed Child on Broadway.

The New York Yankees will be hosting “Harry Potter on Broadway Night,” presented by Harry Potter and the Cursed Child, at Yankees Stadium on Monday, August 15. The collaboration will take place during the 7:05 p.m. game against the Tampa Bay Rays, where the first 18,000 guests in attendance will receive an exclusive beach towel with a design inspired by both the play and the baseball team.

The towel features the nest design from the play’s iconic logo with “NEW YORK” written across it. A small version of the Wizarding World logo is located at the very top, with the Cursed Child title inscribed beneath it. The navy-blue accents on the towel reflect the New York Yankees’ trademark team color.

Tickets can be purchased on the Yankees’ official website. Individual tickets start at $22. Pinstripe Pass tickets are also available for $15, which is general admission, standing-room-only. Potter fans should plan to get there early to ensure they are among the first 18,000 guests and receive their beach towels!

This is not the first time the Wizarding World has collaborated with Major League Baseball. The San Francisco Giants first partnered with Cursed Child back in 2020. Fans were given one of four Hogwarts House-themed Giants T-shirts.

The team will be collaborating with the play once again for another event on August 30, in which they will be offering four different Giants baseball caps representing each Hogwarts House. Tickets begin at $20. A VIP experience ticket, starting at $155, is also available, which also includes one of four Hogwarts House-themed Giants scarves and access to the Triples Alley premium event space. 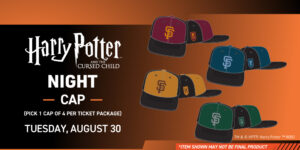 The San Francisco Giants will host a “Harry Potter and the Cursed Night” on August 30. 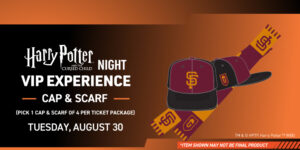 These exciting collaborations are the perfect opportunity to grab some unique merchandise and enjoy a special night at the ballpark. Will you be attending one of the events? Let us know in the comments.