Spooky season is almost upon us, and Universal Orlando Resort is once again treating Harry Potter fans to a series of frightening and spectacular events this year with the return of the “Dark Arts at Hogwarts Castle” experience.

Any Potter fan knows that there’s nothing quite as satisfying as getting scared out of your wits when Death Eaters suddenly appear around a corner while you’re walking the streets of Hogsmeade. This is exactly what this event is all about, and in addition to Voldemort’s followers prowling the streets, fans will also be treated to a spectacular light show that will be projected onto the walls of Hogwarts Castle. These projections will feature various Dark creatures from the wizarding world. Fans can expect to see Voldemort, mountain trolls, and even Dementors, among other things. The last projection will feature a stunning Patronus as a reminder that light always drives out darkness. 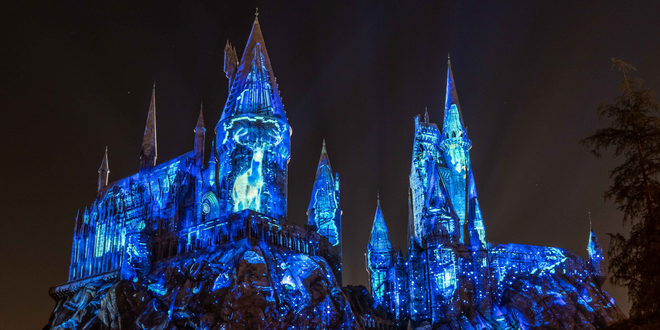 This event will run on select nights from September 16 to October 31. Once you’ve defeated a few Death Eaters, you can spend some Galleons on new merchandise that features the Dark Mark to commemorate the experience. There will be T-shirts, mugs, hats, and lanyards. Death Eater masks will also be available, which might just be the perfect addition to your Halloween costume. 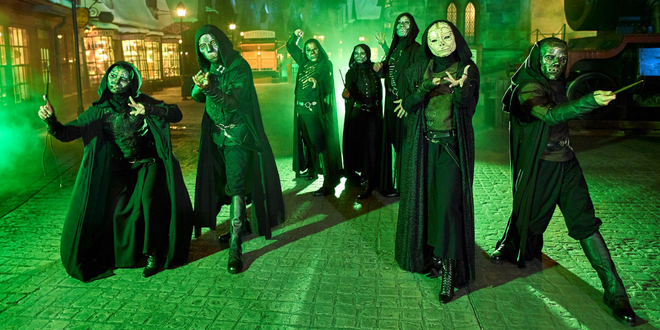 We’re very excited that this amazing experience is returning this year. For more information on the “Dark Arts at Hogwarts Castle” experience, you can head to Universal Orlando’s website.

Will you be joining in the fun? Let us know in the comments.

ORLANDO, Fla. (Sept. 13, 2022) – The darker side of magic comes to life this fall in [t]he Wizarding World of Harry Potter – Hogsmeade at Universal Orlando Resort with the return of Death Eaters and the breathtaking experience “Dark Arts at Hogwarts Castle” – a sinister spectacle of state-of-the-art projection mapping, special effects, lighting and more that brings awe-inspiring moments and creatures from the Harry Potter films to life on the majestic Hogwarts [C]astle. “Dark Arts at Hogwarts Castle” will run select nights [from] September 16 through October 31 from dusk until park close in Universal’s Islands of Adventure.

As darkness falls, an ominous presence will fill the land as the Dark Arts begin to take over the streets of Hogsmeade and cloak the stone walls of Hogwarts [C]astle. Guests will come face-to-face with Death Eaters – devoted followers of Lord Voldemort known for their allegiance and practice of the Dark Arts – as they appear and eerily roam and lurk throughout Hogsmeade. Then, guests will watch as “Dark Arts at Hogwarts Castle” unleashes the unspeakable creatures and sinister villains of the [w]izarding [w]orld – including Dementors, [m]ountain [t]rolls and even a visage of Lord Voldemort – on Hogwarts [C]astle until a Patronus – the result of a powerful defense charm of concentrated happiness and hope – is produced.

Guests can also shop new Dark Arts-themed merchandise featuring the Dark Mark during their visit to [t]he Wizarding World of Harry Potter, including mugs, hats, lanyards, [and] tees – and even a Death Eater mask.