When Heartstopper first dropped on Netflix, I knew that it was a show I absolutely had to watch since I have been a huge fan of the graphic novels created by Alice Oseman since 2019. I instantly fell in love with the show, and it turns out, there’s one familiar voice from the world of Harry Potter in it.

While watching, one moment that did cause me to pause to resort to IMDb was the voice of the school principal. Upon some research, I found out I was right in thinking that it’s Stephen Fry. Though growing up, I didn’t listen to the Harry Potter audiobooks as much as read the physical editions, the voice is recognizable. Despite appearing as a voice on the show, he manages to bring humor, and he is definitely a character I would love to see more of. 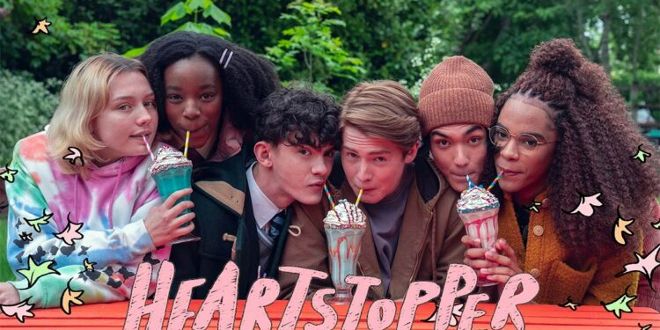 Heartstopper is based on the first two volumes of the graphic novels, or Chapters 1, 2, and 3 of the webcomic, of the same name by Alice Oseman. It follows Nick and Charlie as they try to navigate both high school and their feelings for one another. When we first meet our two main characters, they have been moved into the same form class. As the school year progresses, the two of them become closer and closer, and Charlie soon realizes that he has feelings for his new best friend.

Recovering from a relationship that left him vulnerable, Charlie tries to navigate these feelings while also not wanting to lose his friendship with Nick. As the episodes progress, not only do we learn more about Nick and Charlie, the latter of whom is discovering himself, but we also learn more about Charlie’s friends. We meet Elle and Tao, two friends Charlie has known for several years now, as well as Elle’s friends Tara and Darcy. Over the course of the show, all of these characters come together. Watching the highs (and the lows) of high school with these characters feels very realistic, and you can’t help but root for them as they go through this.

With only eight episodes at half an hour each, it’s easy to binge. The show does introduce two new characters: Imogen, who at times reminded me of Lavender Brown in Harry Potter and the Half-Blood Prince with her obsession and love for Nick, and Issac, who can be seen as a replacement for Aled Last. As a huge fan of not just Heartstopper but the entire Osemanverse, this news made me somewhat nervous. However, I did like these characters. Since I have been a fan of the webcomic for several years now, I had an idea of the direction the show would go, but seeing these new characters added an extra element of excitement for me since I wanted to know how their story lines would play out.

It’s not only these two new characters that really bring the show to life but also the main cast. With the majority of the cast being teenagers themselves, it really adds to the value of the show since too often these days, those who are closer to 30 play teenagers still in high school. And though you would never know it from how well acted the show is, for the majority of the cast, this is their first acting role. Watching them play their characters really makes it feel like the graphic novel has come to life. From the chaotic nature of Darcy to Tori sipping her lemonade whenever she’s on-screen, the cast really manages to nail the personalities of their characters.

The show has been highly praised for its positive representation, and it is easy to see why. The cast is extremely diverse, and it doesn’t play into the tragic tropes that media often tend to do nowadays. Fans, old and young, soon flocked to share their praises online, glad to see themselves represented on television, perhaps for the first time. And with the show being aimed at a younger audience too, it will have an impact on those perhaps struggling with their own sexuality or gender identity, showing them that no matter what, there will always be people who support you.

With Netflix having already announced the second and third seasons of the show, there is no better time to start Heartstopper.