“Fluffy, Not So Much!”: Stephen Fry Talks “Fantastic Beasts: A Natural History”

Ahead of the airing of Fantastic Beasts: A Natural History on BBC One in the United Kingdom, the documentary’s presenter and narrator of Potter audiobooks in the UK, Stephen Fry, sat down with Wizarding World Digital to talk about magical creatures, the environment, and his relationship with Potter.

Tonight’s magical documentary is set to be full of fascinating facts, and Fry revealed that he learned a lot from making the show. One such “obvious fact” that surprised him is that our ancestors living thousands of years ago would have discovered dinosaur fossils.

They had no way of knowing, if they saw a skull of some huge frightening beast, that that beast was extinct for millions of years! As far as they knew, it was around the next mountain or buried in a cave. And that suddenly made sense as to why there are dragon myths all over the world. 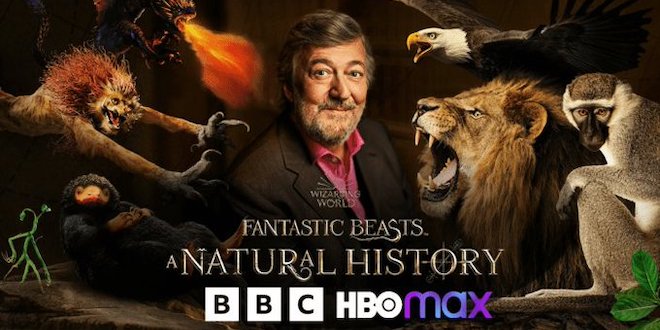 Speaking of magical creatures, Fry stated that while Aragog isn’t his favorite beast from the Potter series, he is drawn to another of Hagrid’s creature companions.

But I did like Buckbeak enormously, and like a lot of people, I have a fantasy of just getting on the back of some enormous flying beast and sort of clutching their fur, their down or whatever it might be, and flying away. I think that’s the thing that most thrilled me, no question. Fluffy, not so much!

But which non-creature character does Fry feel most drawn to in the Wizarding World?

I think we all need a friend, and [a] lot of us yearn for a friend who can be a guide. Dumbledore is quite remote, but that’s the point; he has authority. We all want a mentor. Even when you’re as old as I am, you think it would be nice to have a mentor.

Making Fantastic Beasts: A Natural History took Fry all over the world to meet and learn about Muggle creatures and their environments. His favorite place to visit was the Cleveland-Lloyd Dinosaur Quarry in Utah. Of course, dinosaurs are Muggle world creatures that have been long lost to time, and one theme the documentary explores is the danger of extinction to animals in our time due to climate change.

We were talking about dinosaurs – they went extinct, and it wasn’t our fault. So why should we worry about whales, pandas, white rhinos and Yangtze River dolphins going extinct on our watch? And clearly because of pollution in the water or in other cases because of hunting – we know it’s our fault now.

Hope you enjoy “Fantastic Beasts: A Natural History” on BBC 1 and @bbciplayer this Sunday at 7 pm. The truth behind dragons, mermaids, unicorns and other legendary beasts. pic.twitter.com/lVPQassrNC

Turning to matters of the wizarding world, Fry revealed that while it would be tempting to have the gift of luck, the magical ability he would like to have would be stopping time.

I think that would be so exciting and interesting to go around the world with everybody frozen – I could just wreak havoc! That’s the naughty side of me. The side that would pull people’s trousers down and run away and then start time again and giggle… I mean, that’s pathetic, isn’t it? Come on, Stephen; come up with a more grown[-]up answer.

When asked why he thinks the wizarding world is still so well-loved today, Fry gave a thoughtful answer about our desire to return to “myths, dragons and fantasy” in the face of technology.

That’s when things like ‘Lord of the Rings’ and of course, ‘Harry Potter’ really made their mark on the world. At exactly the time that Silicon Valley was exploding. I don’t think that’s a coincidence; I think that’s a reaction. Of course, we love our shiny gadgets, but we want to return to a world too where not everything is explained by mathematics and programming and coding – but another kind of magic. That’s my theory.

Oh, and for anyone wondering, Fry’s Hogwarts House is Hufflepuff, and his boggart would be “an enormous moth.”