After a solid few months of pictures of Daniel Radcliffe in a curly wig, a mustache, and glasses for his role in Weird: The Al Yankovic Story, there is something refreshing in the artwork released by New York Theatre Workshop for Merrily We Roll Along, his latest project. It features photobooth-style prints of the leads in various fun poses, and the former Harry Potter star is shown to be bespectacled, besweatered, and beaming. 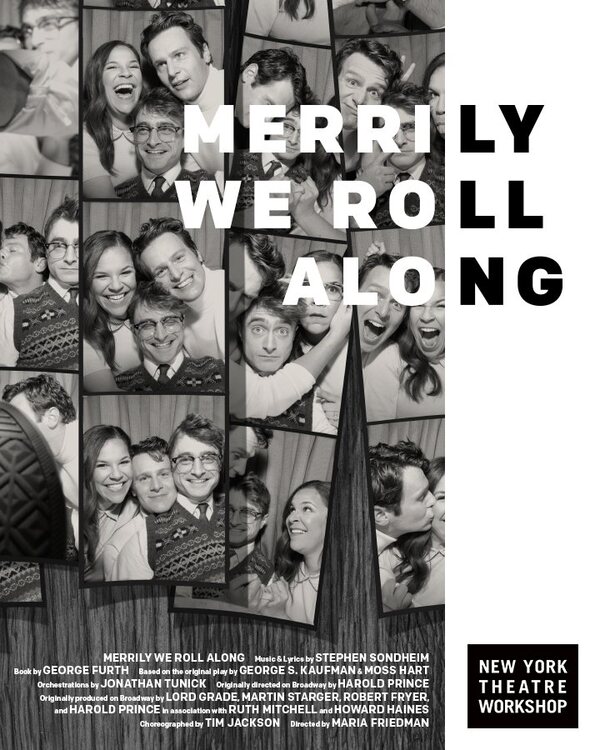 The off-Broadway production follows the tumultuous relationship between three friends in the entertainment business over a period of three decades. Radcliffe plays Charley Kringas, a lyricist and playwright. Jonathan Groff and Lindsay Mendez take on the other lead roles of composer Franklin Shepherd and writer Mary Flynn, respectively. The musical opens the story in the year 1976 and traces the plot back through time to 1957, detailing the lives of each character as they navigate the industry and the subsequent change in the dynamic of their friendships.

The production is directed by award-winning director Maria Friedman, who first directed the musical at the Menier Chocolate Factory in London before it was transferred to the Harold Pinter Theatre to much acclaim, and is choreographed by Tim Jackson. Performances began on Monday, November 21, and opening night is currently set for December 12.

Featuring the music of the venerable Stephen Sondheim, the production will give Radcliffe the opportunity to once again showcase his considerable musical talents after his two-year-long absence from the stage, where he last appeared in Endgame and Rough for Theatre II at the Old Vic in 2020.