There’s just over a month to go until we can finally see Fantastic Beasts and Where to Find Them in theaters, and we can’t wait. In the meantime, here’s a roundup of everything that’s been going on in the world of Fantastic Beasts – and with the release just around the corner, we’ve been inundated with exciting announcements and releases.

In early September, MuggleNet was finally able to reveal details of a set visit that took place last year. You can read all the posts, including a set report and interviews with principal cast members, here.

Most recently, the title list of the soundtrack was revealed, as well as the first listen to the opening track. The soundtrack will be released on November 18.

That’s not the only release we’ve got to look forward to. Plenty of corresponding book titles (as well as the cover for the screenplay) have been announced, as well as merchandise, notebooks, and a Funko Pop! collection. Here’s a list of some of the upcoming book releases, which will all be released on November 18, although release dates may vary depending on country:

Plus, the script for the film will also be released on November 18. Make sure to look out for plenty of other releases coming soon as well!

will allow use of the VR remote as a wand to perform virtual magic, like causing papers to spontaneously fly into the air or taking a tour of Newt Scamander’s famed suitcase.

You can see some examples below.

Daydream will be launched in November, presumably to coincide with the movie, and will cost $79.

You can learn more about the new technology in the video below, which features a tiny glimpse at Fantastic Beasts, so keep watching!

We also got the final trailer for the film, which you can see here if you haven’t already. Plus, IMAX revealed that all eight Harry Potter films would be returning to IMAX for one week in the lead-up to the release of Fantastic Beasts.

Warner Bros. announced a special global fan Q&A would take place on October 13. All allocated tickets have already gone, but it will be available to watch online.

Pottermore also released the Patronus Test. Eddie Redmayne (Newt Scamander) was on hand to take the quiz. Watch him take it in the video below.

The Fantastic Beasts cast members were also out in force to support J.K. Rowling’s Lumos campaign, sporting the special “Be the Light” t-shirts. 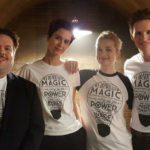 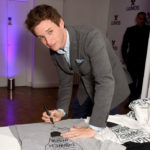 Ezra Miller (Credence) spoke to Pottermore about his role. While he wasn’t able to say much (details of his character are very much under wraps), he did say that

So I’d heard about the part, and remember that to me – someone who got into ‘Harry Potter’ so young, as a fan – I thought this was a universe that had been closed to me forever. I thought we’d had everything we’d ever get from that world. I thought it was over. I spent years devastated that I wasn’t in that world, that I wasn’t in those movies. I would say, ‘I can do British, I promise!’

But he very nearly didn’t get there…

At that stage I’d already signed up to become [DC Comics character] The Flash and there were serious scheduling issues. For a while it looked like I wouldn’t be able to do this movie. […] So I’m thinking about the part, I’m dreaming about it, I want it, and I know deep down that I will do anything for it. So I start emailing Warner Bros. and I say, ‘Look at Humphrey Bogart!’ […] I say in these emails that I want that with you. I want Credence and I want The Flash.

Well, we’re very glad that he managed to make it work!

And finally, this weekend MuggleNet’s Fantastic Beasts podcast, SpeakBeasty, was at NYCC. The SpeakBeasty panel took place on Sunday, October 9, at 10:45 a.m. Catch up here.

Plus, don’t forget to catch up with all the episodes of SpeakBeasty as the team gets ready for the film release.

#SpeakBeasty just met & chatted with @mrdanfogler! What a fantastic guy! ✨ Stop by his booth & grab one of his comics!! (Booth #1260) pic.twitter.com/aQQ8us6gxC

Speakbeasty live podcast at New York Comicon! We just listened to the title track from the Fantastic Beasts film. pic.twitter.com/13Y5tDhbmO

That’s it for this edition of our Fantastic Beasts roundup! While we’re all impatient for the film to be released next month, we’ve got plenty of exciting things to enjoy before then. Let us know what you’re most excited for in the comments below!