Alex Price Wishes He Could Have Played Scorpius Malfoy in “Harry Potter and the Cursed Child”!

Alex Price, who played Draco Malfoy in the original cast of Harry Potter and the Cursed Child, has paid a visit to his former high school! In an interview with the Reigatian, the high school’s magazine, Price talks about his time at school, his first acting job, Cursed Child, and an unlikely dream role!

It is obvious that Price has fond memories of his time at Reigate Grammar School (RGS), which he claims to be “one of twelve schools that [he] went to.” Most people have a teacher whom they credit with having an influence on their lives, and for Price, it was his drama teacher who once directed him as Fagan in a production of Oliver!

Sarah was the biggest influence for me at RGS. I think that the tough times that I had at school (which were few and far between) shaped me just as much as the amazing Sarah Branston.

With parts in other school productions, including The Rivals and Outside Edge, and an A Level (a school leaving qualification) in Theater Studies, drama school was the natural next step for Price. However, this was to the initial dismay of his mother, who “properly flipped out” when he told her of his plans to attend Webber Douglas Drama School! Price’s first role after graduating was in Colourings, a play at the Old Red Lion Theatre in Islington, London. He told the Reigatian that while it was not his most professional audition, he was determined to be cast in the role.

It was about a kid who had been to many schools, and I thought [‘]crikey if I don’t get this one, I might as well give up[‘], and I was very open and honest in the audition about it.

Thankfully, Price was cast and didn’t turn his back on acting! He continued to perform in theater productions and had roles in many films and television shows before being cast as Draco Malfoy in the West End production of Harry Potter and the Cursed Child. When asked about taking on the character of Draco, Price told the Reigatian about the differences between Cursed Child and some of his other projects.

The difference between this and other projects was its scale, the scale of how many ingredients went into it, whether it was the special effects, the magic, the new writing, [the] colossal amount of cast, or the movement of Steven Hoggett. All those different ingredients coming together was huge.

He also touched on the challenges of playing Draco Malfoy and attempting to “try and fill in those 19 years” between the end of the Battle of Hogwarts and the epilogue.

It was strange having this character where you have this crazy back knowledge of him growing up but then you don’t have anything in between…I felt I could push him into different, exciting territory.

Price continues to explore the character of Draco, joining other members of the Year 1 cast on stage at the Lyric Theatre on Broadway. As for life after Cursed Child, Price hasn’t revealed any particular plans. However, an unlikely character has made its way onto his dream role bucket list.

I think that Scorpius Malfoy in ‘Harry Potter and the Cursed Child’ is possibly one of the most incredible pieces of writing for a young character I’ve ever seen. Jack Thorne writes teenage angst like nobody else and I would have killed to play Scorpius when I came out of drama school.

If only we had a Time-Turner! You can read Price’s full interview with the Reigatian below.

Thanks to former MuggleNet staff member Claire Furner for the tip! 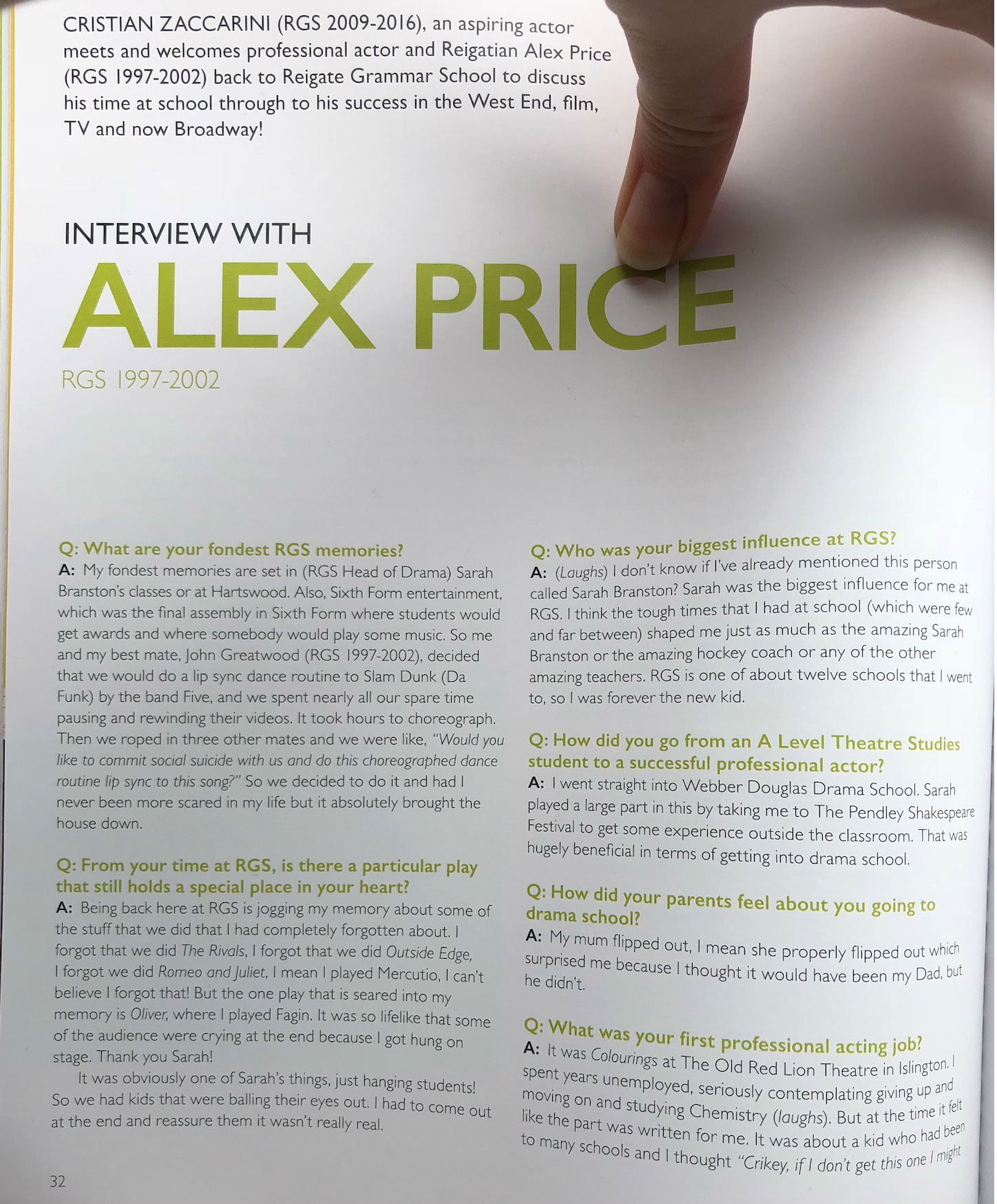 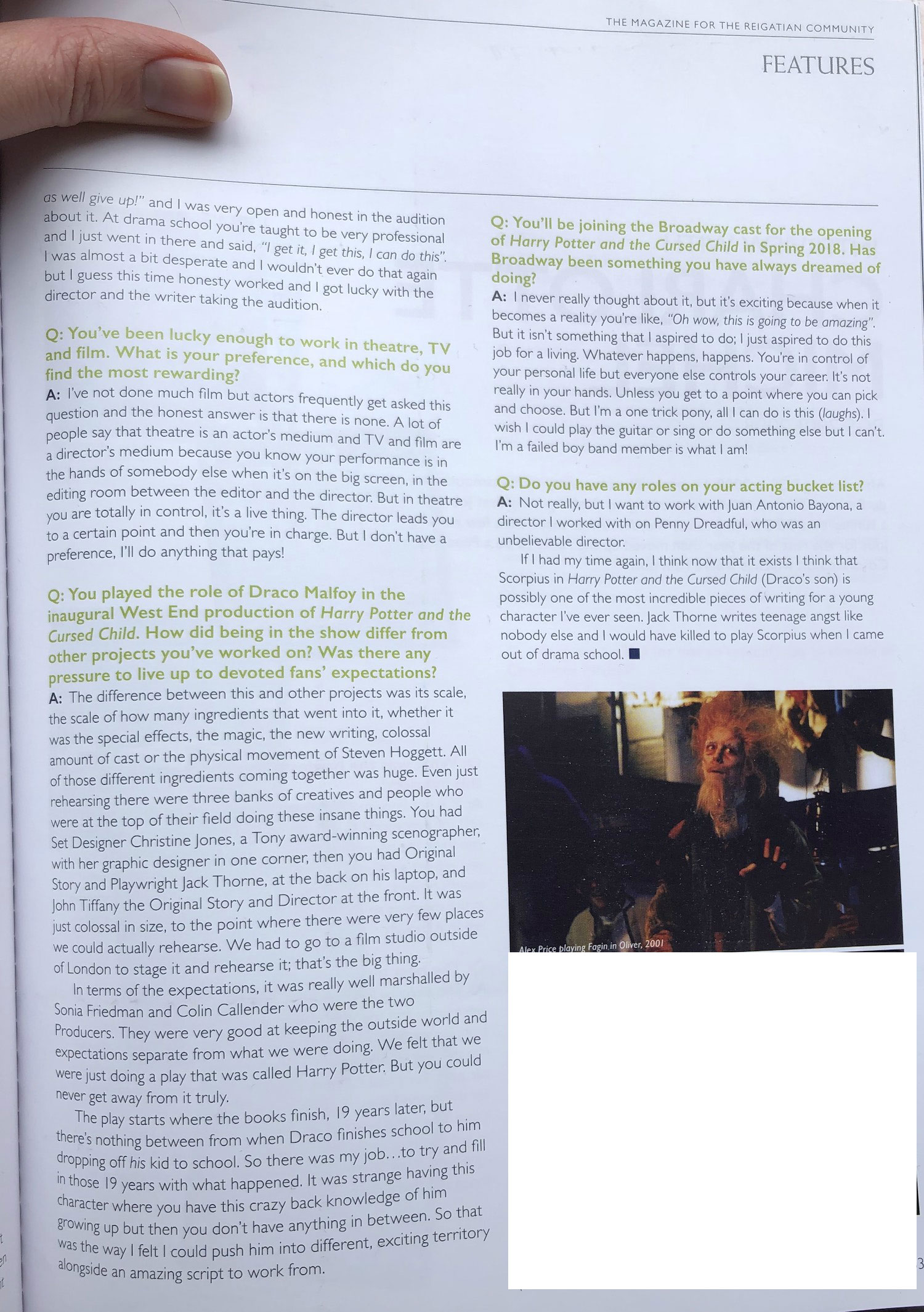