School is back in session! Jam City has officially launched Year 5 of Harry Potter: Hogwarts Mystery.

Apparently, this will be students’ “most rigorous year of studies yet,” with more content than in any of the previous years. If you earned a prefect badge in Year 4, you will take on those responsibilities and perks (access to the prefects’ bathroom!) in Year 5. All Year 5 students will be taking their Ordinary Wizarding Levels (OWL) exams, so start studying!

Year 5 will also introduce new locations as students “explor[e] decidedly dodgy areas like Knockturn Alley.” You will take lessons from History of Magic professor Cuthbert Binns and the new Defense Against the Dark Arts professor, revealed at the end of Year 4 (any guesses?). Outside of class, players will run into more familiar characters from the wizarding world, including members of the Weasley family.

Amanda Heaton, executive producer at Jam City, commented on the additions to the game.

Year 5 is a pivotal year for any student at Hogwarts, with the O.W.L. exams looming, new professors to navigate, and for some, a prefect badge on their robes. We wanted to reflect the rigors of this year in the mobile game, balanced, of course, with the core extra-curricular [sic] activity at Hogwarts: unraveling mysterious [sic] with your school mates [sic]. Year 5 brings the most robust year of content yet to the game, and we’re excited for players to start this new chapter.

We expect that the most likely Weasley to run into is Percy since he will now be in Year 2 – we’d love to see him interacting with Bill and Charlie! And since this new info suggests more than one Weasley, might we also expect Molly or Arthur? Other characters we know who should be attending Hogwarts at this time and whom we could potentially encounter include Oliver Wood, Penelope Clearwater, and Marcus Flint – that’s not to mention the range of adult characters in Hogsmeade and Diagon Alley and creatures in the Forbidden Forest we have yet to meet.

On starting Year 5, there are four new areas that we’re immediately granted access to: the Defense Against the Dark Arts classroom, the History of Magic classroom, the prefects’ bathroom, and the grand staircase. Take a look at them below: 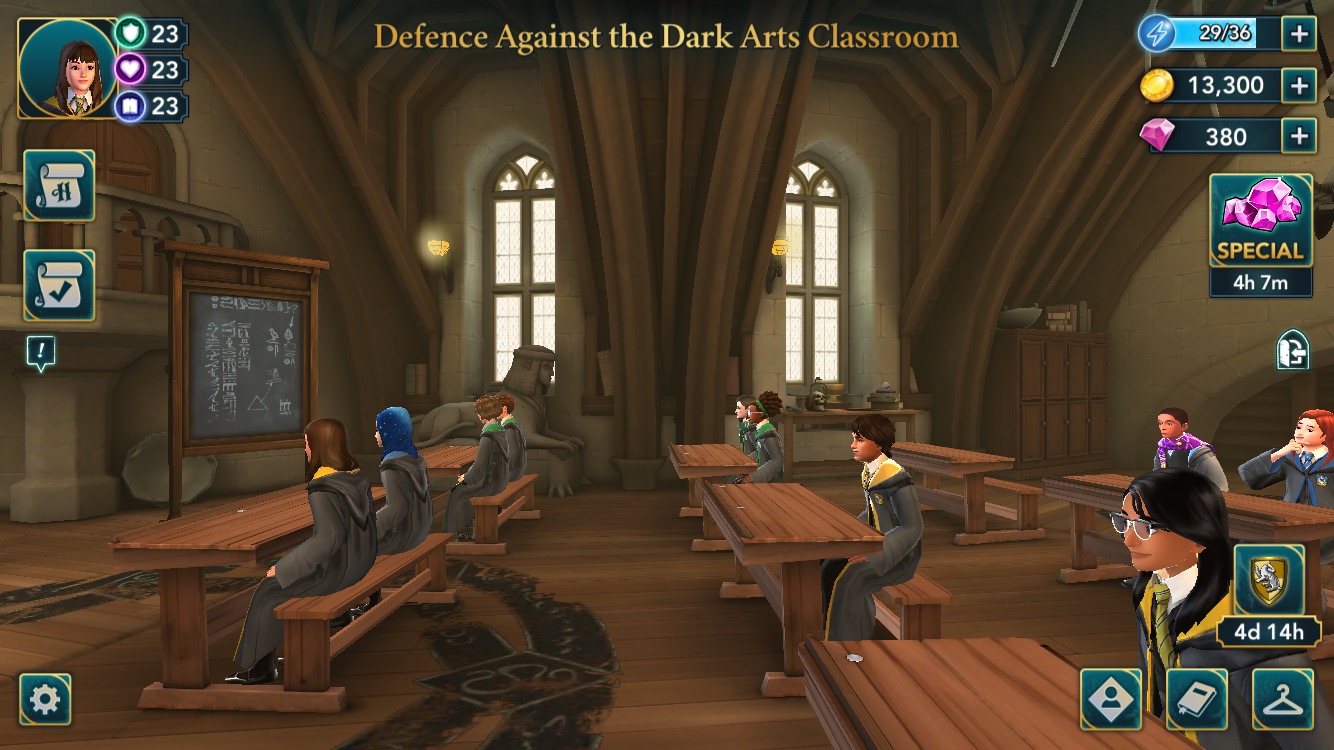 Year 5 opens with the first playable Defense Against the Dark Arts lesson. 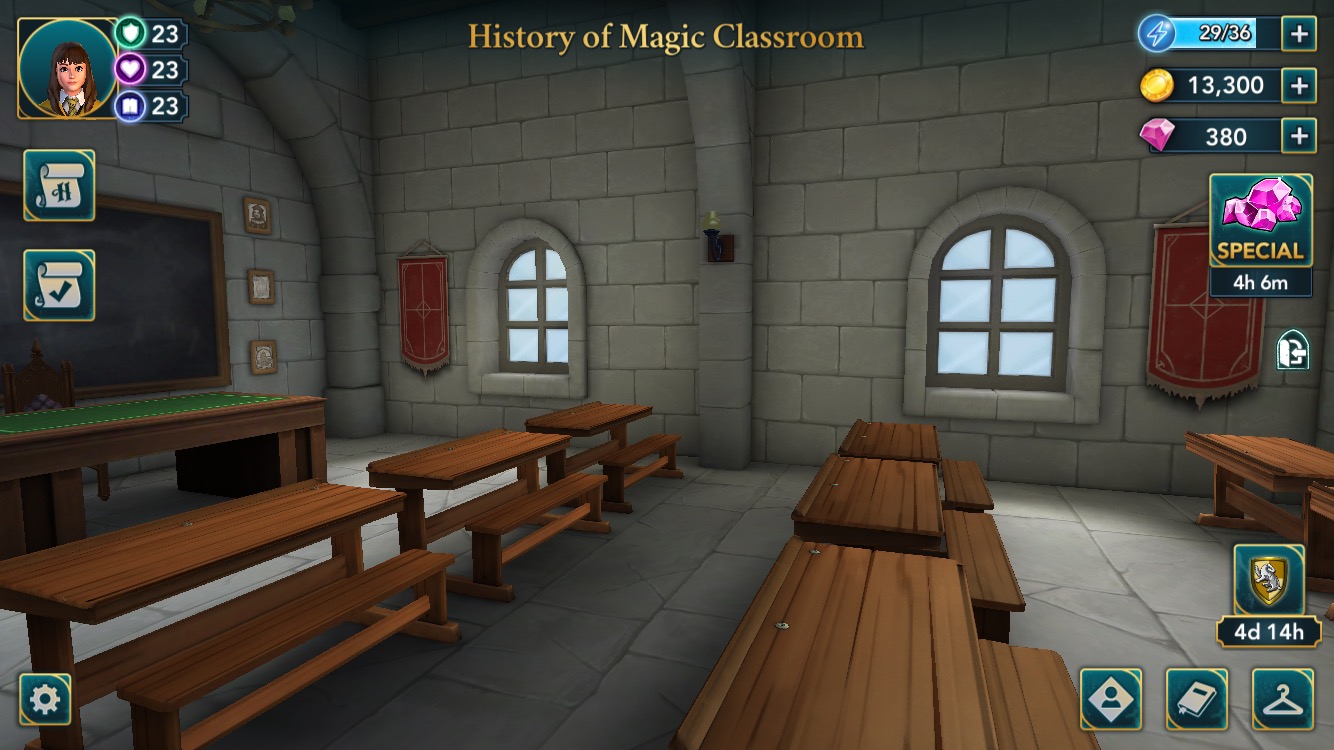 Players will soon get their first History of Magic lesson, taught by Professor Binns. 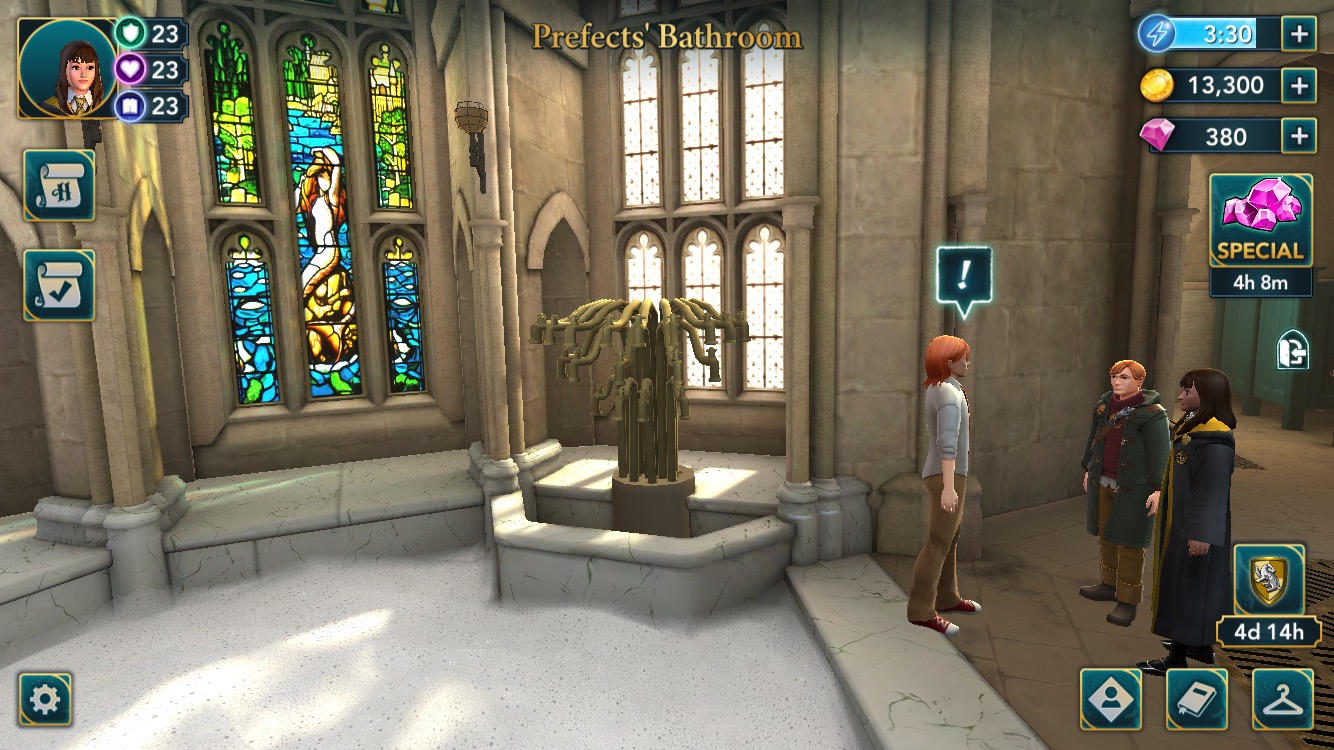 Players who successfully completed the side quest to become a prefect gain access to the prefects’ bathroom in Year 5. 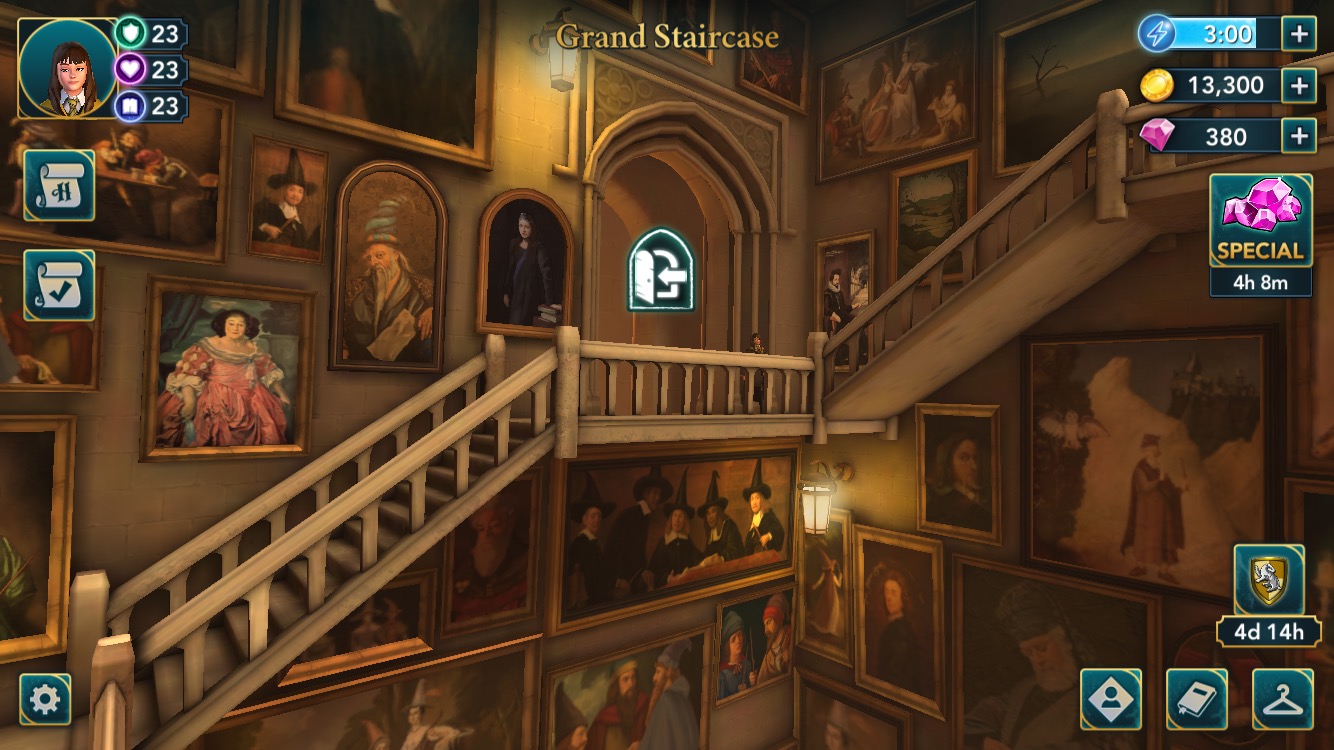 The grand staircase is one of the new locations available in Year 5.

Check out the press release below for more information. Which addition are you most excited about? We’ll check back with you after we complete Year 5!

Who: Jam City, a Los Angeles-based mobile games studio, in partnership with Warner Bros. Interactive Entertainment’s Portkey Games, a label dedicated to creating new Wizarding World mobile and video game experiences that place the player at the center of their own adventure, inspired by J.K. Rowling’s original stories.

What: In the hit mobile game Harry Potter: Hogwarts Mystery, fans receive their acceptance letter, create a character and attend Hogwarts School of Witchcraft and Wizardry. Taking part in the rituals and routines of student life, from collecting their textbooks at Flourish and Blotts to attending classes with venerable professors like McGonagall, Flitwick and Snape, players have taken to life at Hogwarts. Today, players head back to school with the commencement of Year 5 content in the game, beginning the most exciting year at Hogwarts yet, with a host of new mysteries to unravel.

In Year 5, players return to Hogwarts for their most rigorous year of studies yet, and important milestones in the curriculum. Players that earned their prefect badge in Year 4 will take on the responsibilities of the role while enjoying access to a new location in the game, the prefect’s [sic] bathroom. But all Year 5 students are faced with an even bigger test than earning the badge: taking their Ordinary Wizarding Levels (O.W.L.) exams.

As Year 5 unfolds, players will head into new territory - and mischief - exploring decidedly dodgy areas like Knockturn Alley. Back on school grounds, players will learn from new professors like the lauded, but legendarily long-winded History of Magic Professor, Cuthbert Binns and the identity of the new Defense Against the Dark Arts professor will be revealed. Outside of classes, players will cross paths with more members of the Weasley clan and other familiar characters from the Wizarding World.

Quote: “Year 5 is a pivotal year for any student at Hogwarts, with the O.W.L. exams looming, new professors to navigate, and for some, a prefect badge on their robes,” said Amanda Heaton, Executive Producer at Jam City. “We wanted to reflect the rigors of this year in the mobile game, balanced of course, with the core extra-curricular [sic] activity at Hogwarts: unraveling mysterious [sic] with your school mates [sic]. Year 5 brings the most robust year of content yet to the game, and we’re excited for players to start this new chapter.” Background: Harry Potter: Hogwarts Mystery is the first mobile game where players can create their own character and experience life as a Hogwarts student. In the narrative adventure with RPG elements, players will create a personalized student avatar, attend classes, learn magical skills, and form friendships or rivalries with other students. In the game, players make pivotal decisions that influence their character’s story arc at Hogwarts. The game features a new encounter system where player decisions and actions impact their quests, allowing Harry Potter fans to create their own legacy as a witch or wizard.