There are lots of LGBTQ readings of Harry Potter out there, and some of the popular ones include Drarry (Draco and Harry), Sirius Black as bisexual, and Charlie Weasley as asexual. Of course, everyone has their own ships and headcanons, and there is no shortage of remarkable fan art depicting them. Here are a couple of the characters that I read as LGBTQ, and I try to base my interpretations as much as possible on cues from the text.

Colin Creevey is overenthusiastic about everything, but his obsession with Harry seems like an obvious 11-year-old crush to me. Memorizing his schedule, taking pictures of him, trying to bring him grapes in the Hospital Wing – how else does a middle schooler know how to show his affection? Later on, Colin seems to calm down a bit and shows a more mellow admiration of Harry, and I imagine that by then he has moved on to other crushes and relationships.

Why does Marietta come with Cho to DA lessons even though she clearly doesn’t want to be there? Why does she tell on the DA after six months of attending their meetings? Why does she hate Harry so much? I think all of these questions can be easily answered if we interpret Marietta as having romantic feelings for Cho. Cho wanted a friend to join the DA with her, and Marietta saw this as an opportunity to prove her loyalty and affection to Cho. Marietta is resentful of Cho’s feelings for Harry, and I imagine that she has a fight with Cho, perhaps about the fact that Cho is still sticking up for Harry even after his terrible treatment of her. Marietta then snaps and goes to Umbridge to try to get Harry in trouble. Does Cho ever return Marietta’s feelings toward her? It’s hard to say, but Cho certainly sticks by Marietta’s side even after her betrayal.

Casper ter Kuile, from the podcast Harry Potter and the Sacred Text, first introduced me to this reading in Season 6, Episode 4, and his explanation is so compelling that I feel the need to share part of it here. He noticed that Slughorn only has pictures of his students on his shelves and not children, and wondered whether Slughorn might be gay. “This whole metaphor of running and hiding, just as a closeted metaphor, is really, really strong,” says ter Kuile. He sees this particularly in the scene when Dumbledore and Harry go to Slughorn’s house, and to him, it explains the close but complicated friendship between two characters with such different personalities.

There is some sort of camaraderie in this scene, some sense of shared experience. And there’s a sense of silly, funny, queenie teasing that I just really love. I just love thinking of this moment as a scene between two older gay men who are like, ‘Yeah, we’ve chosen different lives, but […] we have this shared experience, and maybe we’re not talking about it publicly, but I feel connected to you in a way where I can just show up in your house and be like, girl, get it together!'” 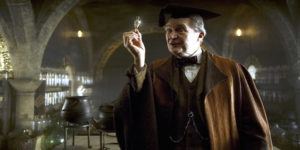 Archie Aymslowe, president of the club Fresh Air Refreshes Totally (F.A.R.T.), is most likely the same Archie whom Harry, Ron, and Hermione meet wearing a flowered nightgown at the Quidditch World Cup. This organization doesn’t believe in Muggle pants and wears wizard robes in public, sometimes combining multiple different fashions, including crinoline dresses worn with sombreros and football boots. There are many possible readings of Archie. He might be realizing a trans identity, or perhaps he enjoys dressing in drag and has created a drag club for other wizards. Or maybe, he’s simply pointing out the arbitrariness of gender norms and the expectation that wizards should stick to the Muggle gender binary instead of the wizarding unisex robes. Whatever way you look at it, I love that Archie does not allow himself to be ridiculed and stands by his right to wear whatever clothing he chooses, regardless of gender expectations.

Did Dumbledore and Elphias Doge have a relationship while at Hogwarts together? Elphias certainly seems to have deep feelings for Albus, and he even uses the words “mutual attraction” in his obituary (DH 16). They plan on taking an intimate trip around the world, and while Elphias is on the trip, Albus writes little to him about his daily life, potentially because he does not want to hurt his former boyfriend with descriptions of his new relationship with Gellert Grindelwald. Of course, it’s possible that Doge’s love is unrequited: We hear from Aberforth that Doge “thought the sun shone out of my brother’s every orifice, he did,” and from Auntie Muriel, “We all know you worshipped Dumbledore” (DH 563, 154).

I owe a huge debt for this article to Harry Potter and the Sacred Text, which inspired me to read Marietta, Horace, and Elphias in a completely different way. I would love to hear about other people’s LGBTQ+ readings in the comments!