Ron Weasley: The Normal Hero That I Needed

Those who know me also know that I absolutely love and adore Harry Potter. From the enchanting and magical world of Hogwarts and Diagon Alley to the thrilling challenges that Harry faces, nothing makes me happier than settling down to either read or watch Harry Potter.

My love for the series has been with me since 2001 and has been going strong ever since. However, my relationship with Harry wasn’t always like this. There was a time when I hated – even despised – the series, and I didn’t want anything to do with it.

I was nine years old when Harry Potter exploded in the literacy world. Everyone I knew was talking about this magical and gripping book, but for me, I perceived it to be another voice for the wealthy. The ones who make the poor out to be horrible and ignorant folk. That anyone who may not be able to grasp the art of reading is ignorant and deserves to be sneered and jeered at through vicious and patronizing descriptions. As you can tell, I was an extremely opinionated child. These opinions stemmed from long and complicated experiences with authors of a similar genre to Rowling’s. Their style of writing often depicted their villains as being overweight because of their laziness or ignorant because of their inability to read. To this day, despite my appreciation for the quirky illustrations or the author’s backstory, I still cannot relate to their world and find their books extremely difficult to swallow.

I protested against the books for four years but actually tried reading Harry Potter and the Sorcerer’s Stone during this period, giving up after chapter one and vowing never to look at it again due to its slow pacing and unlikeable characters with all the same “nasty” attributes that I disliked from previous authors.

However, when I was 13 years old, the spotlight fell onto Harry Potter once more due to the upcoming film release of Sorcerer’s Stone, and not wanting to be left out, I decided to give Harry another go but to forego the first chapter.

It took me a while to get into the book, but I kept persevering as there was one person to whom I was desperate to meet and who kept me glued during those first few chapters. It wasn’t Hagrid, nor Hermione, nor the appeal of the magical world itself. It was Ron. 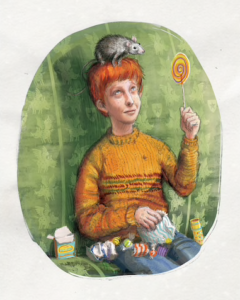 Before committing myself to actually reading Harry Potter, I remember sitting at the top of my stairs, flicking through my mom’s copy of Sorcerer’s Stone, still wondering why people liked this when I landed on Harry and Ron’s first meeting on board the Hogwarts Express. I was pleasantly surprised that this Ron character seemed normal. Down to earth even. “I kind of like Ron,” I thought to myself as I carried on skimming through the book before placing it on the windowsill and running downstairs to have something to eat. I put the story in the back of my mind.

Fast forward a few months, and it was virtually impossible to get the book out of my hands (I never did return that copy to my mom – sorry, Mom). I fell head over heels in love with the series, devouring as much as I could about this exciting and magical place, re-reading Sorcerer’s Stone over and over again until I knew it completely by heart, and through that, Ron became my hero. I loved his honesty, his sense of humor, and the brilliant one-liners that he came out with. The fact that he loved food and often suffered from being hangry (something that I still struggle with) was a wonderful, relatable trait that wasn’t put down to being greedy or selfish, just an attribute of Ron’s character. Ron was (and still is) an absolute joy to read.

Through Ron, I discovered that Harry Potter was a wonderful place to visit and wasn’t as scary or unwelcoming as I first thought and fought against. Ron had flaws just like everyone else and struggled with certain subjects but was still intelligent and knowledgeable within his own right, an element that always annoyed me whenever Ron’s lines were stolen in the films. I always felt disheartened that film Ron had become something less of the character that I knew and loved him to be. He had turned into the substandard comic relief for the series, but as a character, he deserved more.

Even in Harry Potter and the Cursed Child, Ron was pushed to the side to make way for Harry, Hermione, Ginny, and even Draco Malfoy of all people. His lines were shallow, whilst his presence wasn’t necessary other than “Ron’s always good for a laugh.” This was another missed opportunity to show how exceptional he is.

I owe a lot to Ron, for without him, I don’t know if I ever would have looked past my judgment of the books or films, if I ever would have given them a proper try. Weasley is certainly my king, and I want to thank Ron for being the down-to-earth character whom I so desperately needed.