Get Back on Your Broomstick with Google Assistant and Pottermore Publishing

Continuing in its mission to bring the Wizarding World to life, Pottermore Publishing has launched a new Google Assistant action, Quidditch Through the Ages: Highlights. This is the second Google-Pottermore partnership, after the Back to Hogwarts campaign in September 2019.

By simply saying “Hey Google, tell me a Quidditch story” to a device with Google Assistant installed, fans will be able to hear one of two extracts from the Quidditch Through the Ages audiobook, with a further three extracts set to follow soon. But the new Google Assistant action doesn’t just play extracts of the audiobook, narrated by Andrew Lincoln (best known for his role in The Walking Dead). It also gets fans involved in the world of Quidditch, challenging them to catch a Snitch, score a goal, or answer quiz questions on what they’ve just heard. And if you master these challenges, don’t worry – more activities are promised with each update.

Explore the wizarding sport Quidditch like never before with a new experience made for Google Assistant-enabled devices.

Simply say “Ok Google, tell me a Quidditch story” to dive into immersive extracts of Quidditch Through the Ages!#OkGoogle https://t.co/v5oXHDnDe8 pic.twitter.com/j3R2MyS7P6

Fans with screen devices, such as a smartphone, can activate the Google Assistant action using gestures and read along with each extract as it appears on the screen. The Quidditch Through the Ages audiobook was released in March 2018, and much like the audiobook of Fantastic Beasts and Where to Find Them, it contains additional sound effects to complement Lincoln’s narration and bonus content not found in the print books. For Quidditch Through the Ages, the bonus content takes the form of recorded audio from the 2014 Quidditch World Cup, featuring appearances from Ginny Weasley, Rita Skeeter, and Viktor Krum. 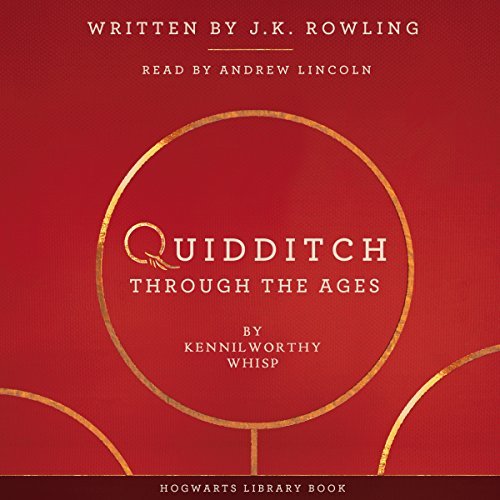 And while waiting for the additional extracts and games to be released, if you want to see Quidditch Through the Ages brought to life in another way, this year saw the publication of the illustrated edition of the book. This edition contains illustrations by Emily Gravett, and its publication was celebrated in a rather unique way. A team from Bloomsbury publishing set off on a journey to towns and villages featured in the Quidditch league in Quidditch Through the Ages and presented communities with decorative banners celebrating their fictitious teams.

Have you tried the Quidditch Through the Ages: Highlights Google Assistant action yet? Which extract from the audiobook would you like to see brought to life in this way?