Rupert Grint: “The Darker Side of Me Is Julian”

Why would a new first-time dad star in a series about a creepy doll baby coming to life? Ask Rupert Grint. With Season 2 of Servant out now and filming for Season 3 well underway, he addressed questions about his role as Julian Pearce (the uncle of said fictional baby), about being a father (of a real baby), and about his public life and career now that it’s the first Harry Potter movie’s 20th anniversary year. 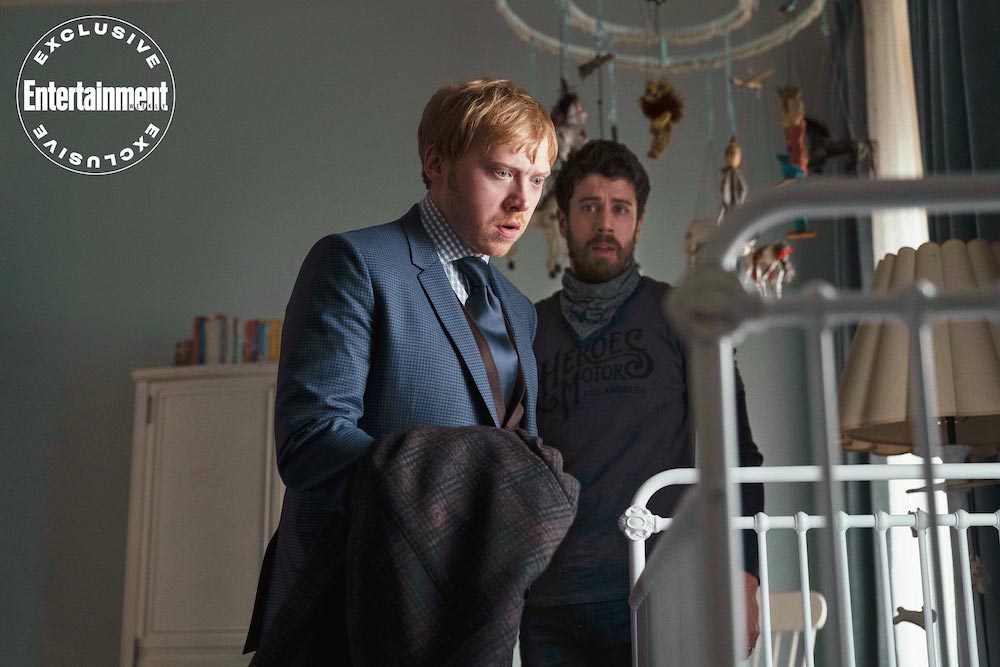 Rupert Grint brings his dark side in “Servant.”

Even before filming on Harry Potter wrapped, lead star Daniel Radcliffe was jumping into other projects onstage and on-screen. So was Emma Watson (Hermione Granger), first by going to college and then acting in several more titles. The face of Ron Weasley was a bit more hesitant.

I kind of peaked very early on, I think. I wasn’t in a huge rush to do as many things as I could. And I think when I started doing a bit of theater, that’s when I got a bit of the love back.

But it wasn’t because he fell completely out of love with acting by the time Harry Potter and the Deathly Hallows – Part 2 finished that he considered other avenues, such as driving his famous ice cream truck or beekeeping. He does in fact have a real beekeeping operation in his home, where he has been sheltering with partner Georgia Groome and their nine-month-old daughter, Wednesday.

I think I’ve always had that kind of ethos that nothing is forever. I do just feel like, ‘Maybe I’ll just be a beekeeper. I’ll just do that.’ I love acting, and I love being a part of the show. And I’ve really enjoyed playing the characters. But I do often think maybe I could do something else later on.

Rupert never hated fame, but he’s enjoying getting a glimpse of anonymity in a mask-wearing world. While unfounded rumors of a Potter series on HBO have recently resurfaced, it is worth considering whether he would be willing to reprise his role as Ron.

I think going back now would be… I can’t really imagine it. But I mean, never say never. It would only be if everyone else wants to do the same. But yeah, no… I think just leave it.

On other subjects, he is a lot more decided. He had already joined several Potter alumni in firmly supporting the trans community last year.

I think, also, you can have huge respect for someone and still disagree with things like that. I think to stay silent would have spoke. Sometimes silence is even louder. I felt like I had to because I think it was important to. I mean, I don’t want to talk about all that… Generally, I’m not an authority on the subject. Just out of kindness, and just respecting people. I think it’s a valuable group that I think needs standing up for.

About his ongoing role as Julian in Servant, he revealed that he thinks, “weirdly, there is probably a side of me that is quite Julian that I don’t really project.” Julian is quite the opposite of the fierce best friend Rupert played for over ten years. “The darker side of me is Julian,” he confessed. He compared Ron and Julian, revealing he, “always had this weird thing with Ron, when I was reading the books as a kid. It just felt like we were connected in some way.” He also “had that with Julian. I just feel very comfortable in his skin.”

Catch Rupert on Servant Season 2, streaming now on Apple TV+. He is also on Instagram, with an account that broke Jennifer Aniston and David Attenborough’s records of getting a million followers the quickest. Well, Weasley is still our king!