The Victoria and Albert Museum’s Alice: Curiouser and Curiouser exhibition, a showcase of all things Alice in Wonderland, opens on May 22 in London, England. Ahead of the event, Helena Bonham Carter (Bellatrix Lestrange) shared her relationship with the whimsical and silly Alice in Wonderland in the May issue of the British edition of Harper’s Bazaar, giving a look at what readers can expect from the other “odes to Alice” in the issue. 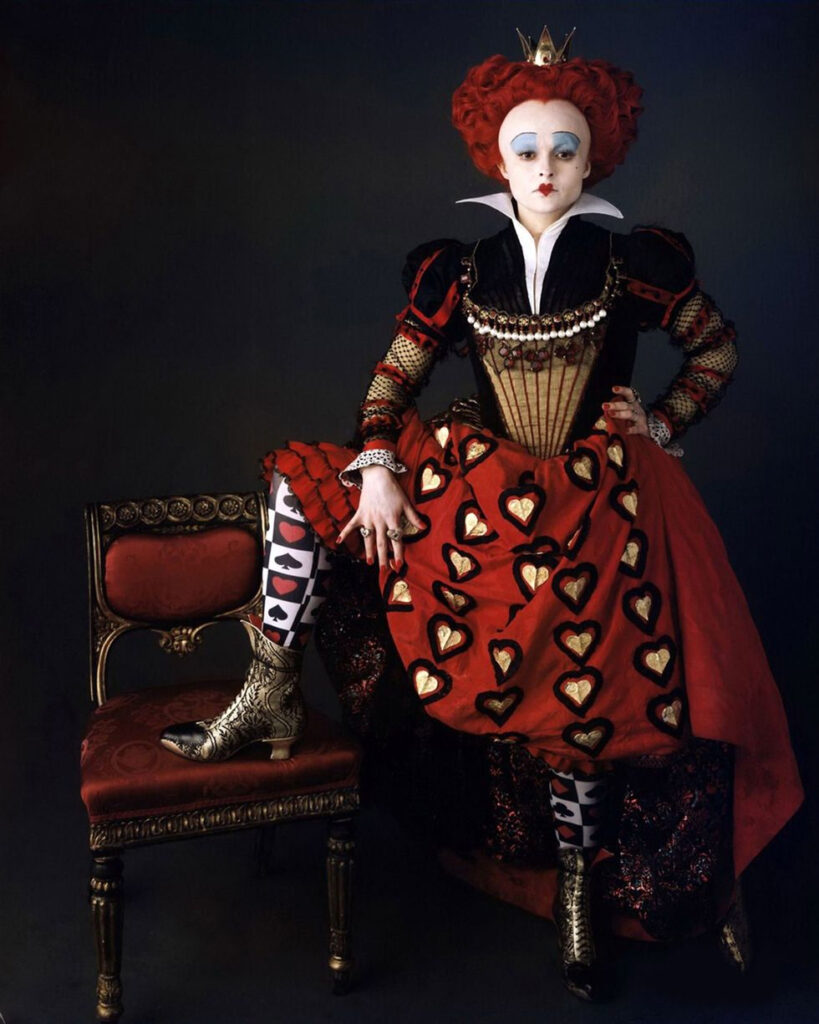 Bonham Carter’s long-standing relationship didn’t just start with Tim Burton’s Alice in Wonderland. At age six, Bonham Carter received an Alice doll for Christmas, which was her friend and companion on her magical adventures. At age 14, she realized that Lewis Carroll’s Alice had dark hair and dark eyes like her, which resulted in her dressing up as Alice at Westminster School at age 16. It was fate when she was placed in a house called Liddell’s (named after the real Alice’s father, who was headmaster of Westminster).

Since then, I’ve pillaged and borrowed and stolen all things Alice and woven and imported them somehow into my life. Now I come to think of it, everywhere I look at home, every view has some reference to Alice: frog footman candlesticks, teacup constructions, a teapot lamp, a chessboard teapot, an oversized pocket watch, undersized doors, bunnies, internal windows that look like mirrors, and mirrors that look like windows. In the summer, I bring the indoor furniture outside. The landing has a shopfront that started life outdoors and is now the entrance to the loo. My home is an example of topsy-turvy living and a labyrinth with many, many doors. There are so many doors… not many visitors leave without assistance.

Bonham Carter has also roped her children into her Alice obsession by doing photo shoots with her daughter, including along an empty lane and in a dollhouse.

No wonder she seems to have imbibed the Carroll culture and speaks at times with a Wonderland lexicon: ‘Mama, I’m confuzzled today.’ Now, as I watch her daily sprouting vertical inches, I feel she looks like Alice herself, outgrowing her girlhood bedroom. I expect one day to see her foot sticking out of her window onto the landing.

When landing the role as the Red Queen, Bonham Carter described the meeting with former partner Burton as unexpected. He invited her to a formal meeting in his office:

I wonder if you would consider playing the Red Queen in my film of Alice in Wonderland? Look, it’s got to be you, because I’ve drawn you without intending to.

Bonham Carter thanked him formally and stated that she would get back to him soon with an answer. She was excited, having had internalized Wonderland her whole life.

Bonham Carter points out the very potent images that we as human beings can all relate to, such as being trapped in a hallway with closed doors, feeling too small, being an outsider looking in, and drowning in our own tears. These metaphors carry depth and substance, which is why Carroll’s work is timeless. Above all, Alice in Wonderland allows us to revisit the innocence of youth.

For me, the biggest gift that Alice has given me, and perhaps to many others, is in the clue of shrinking: it’s a portal to our child within. I can telescope back to being little – to being six when I got my doll, to an age when I marvelled at things and was in a state of wonder. To nurture and keep alive the child within is always healthy. Virginia Woolf wrote that the Alice books were ‘the only books in which we become children.’

Having grown up with Harry since I was twelve years old, it is such a treat to be a part of the best book club any Harry Potter fan could ask for. I graduated in 2016 with a Creative Writing degree and since then have been freelance writing on the side. Outside of the literary world, I love the outdoors, hiking, and binge-watching Parks and Rec for the billionth time.