Many of the actors from the Harry Potter films had close working relationships. After all, why wouldn’t they? Many of them spent the better part of ten years bringing our favorite fantasy series to life.

Of these working relationships, some are perhaps more surprising than others. For instance, Matthew Lewis and Alan Rickman (who played Neville Longbottom and Professor Severus Snape, respectively) had a last-minute sit-down during Rickman’s last day of filming on the Harry Potter series.

It might be an unexpected pairing, but it was a meaningful one. On Rickman’s last day of filming his role as Severus Snape, Lewis went to his trailer to say goodbye and show his appreciation for Rickman’s outstanding acting. Lewis has described the heartfelt interaction in previous interviews.

I went to his trailer. And I just said to him, ‘Hey, I know it’s your last day, and I just wanted to say this has been incredible, to have worked with you for this long. I know that we’ve not really spoken very much, but I just wanted to say it was because I terrified, but you were incredible… Thank you for allowing me to work with you for 10 years and not ever shout at me or treating any of us as anything less than your equal.’ And he was like, ‘Come on in.’ And he put the kettle on, and we had a cup of tea, and we chatted about what I was going to do in my career moving forward and what he recommended I do. 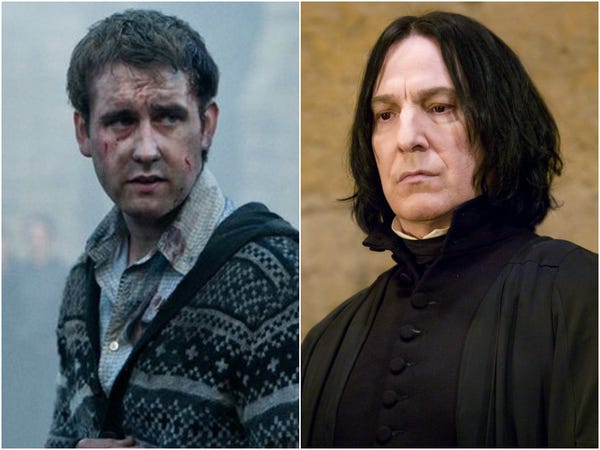 According to Lewis, some of the conversation consisted of Rickman advising him to pursue theater acting. Lewis talked a little bit more about taking the actor’s sage advice and how it changed him as an actor.

He said, ‘You can do it!’ He said those words. He recommended theatre, and that’s why I did some theatre. I learned so much more about myself as not only an actor but [also] as a person and what I want out of life; I learned that on stage.

While Rickman’s advice sent Lewis on a career path he won’t soon forget, Lewis said he only wishes he had that conversation sooner.

Lewis wasn’t the only younger cast member of the Harry Potter cast to get professional encouragement. Shortly after Rickman’s passing, Daniel Radcliffe recalled post-Potter projects and the support he received from Rickman.

He was so encouraging of me both on set and in the years post-Potter. I’m pretty sure he came and saw everything I ever did on stage both in London and [in] New York. He didn’t have to do that.

Alan Rickman passed in 2016 after his battle with cancer. However, his legacy lives in the minds and careers of the younger actors he gave promising advice to.