Then, it looked like the tournament might finally happen in Brescia, Italy, and Limerick, Ireland, in August, but now the EQC has been postponed again to next year.

In February, when the locations and dates were announced, it wasn’t clear if the EQC would be held, and it had to be confirmed in the spring. Meanwhile, the new leadership of Quidditch Europe was elected, and this postponement had to be one of its first decisions. 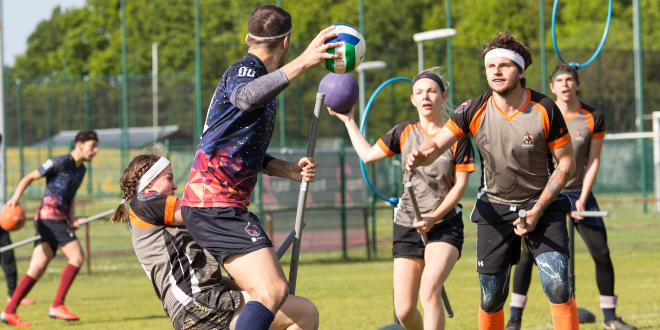 Before the new board of Quidditch Europe made its decision, it focused on a few main points. These concerns included general health and safety, as well as concerns about travel restrictions – not only for Ireland and Italy but also for all national governing bodies (NGBs) within Quidditch Europe. There was still a possibility that some of the qualified Muggle quidditch teams wouldn’t be able to travel to attend the tournament, and some NGBs have had continued restrictions on training.

We believe that to do what is best for our beloved sport, we have to see the whole picture. European Quidditch Cup it’s [sic] meant to be an event where teams and players can not just compete but [also] improve, enjoy and evolve. Due to COVID-19 restrictions, sportive activity is on standby [for] many NGBs. We do not think that hosting a tournament where players have not had the opportunity to properly train at the level that is required to do their best at an EQC matches the spirit and essence of the event.

Quidditch Europe is already working on European Quidditch Cup 2022. Both divisions will take place at the same locations, with Division 1 in Limerick, Ireland, and Division 2 in Brescia, Italy. The dates have not been announced yet.