While we’ve had confirmation of all the 20th-anniversary LEGO Harry Potter sets, it has since been revealed that there is more LEGO Harry Potter to be released this year, and it comes in the form of BrickHeadz.

The revelation is thanks to YouTuber Ashnflash, who has confirmed previous rumors of two new sets in a recent video that he describes as an “early review of upcoming, unreleased, and never-before-seen LEGO Harry Potter BrickHeadz sets.”

Set number 40495 will be the first-ever set to contain four characters, Harry Potter, Hermione Granger, Ron Weasley, and Rubeus Hagrid, and you’ll find Voldemort, Bellatrix Lestrange, and a rather adorable-looking Nagini in the other set (40496).

Ashnflash talks us through the BrickHeadz, showing how each member of the famous trio has a different-colored wand and explaining that Harry Potter is a “smaller version than the last one and is in the style of the smaller characters that come normally with a large BrickHeadz.”

The Ron and Hermione BrickHeadz are also the same size as Harry. Their small stature is later explained on the packaging, which displays a photo of the 12-year-old versions of the characters from the film Harry Potter and the Chamber of Secrets.

Hagrid being half-giant is also reflected in the size of his BrickHeadz, which towers over Harry, Ron, and Hermione, at almost double their height. The design found on Hagrid’s coat is an exclusive print, and he comes with his infamous pink umbrella. 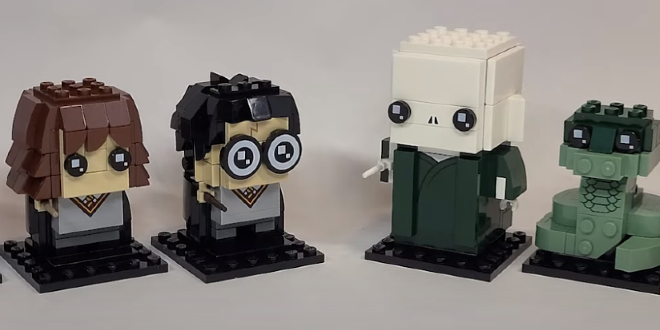 Moving on to the villains, this is the first time Voldemort has been put into BrickHeadz form. He has his white wand and is wearing a long, deep green robe, reflecting his House color. Nagini’s tail is coiled up, and on her front is a printed, sloped piece that shows her scales.

Finally, Bellatrix’s terrifyingly dark and curly mane of hair has been amazingly translated into BrickHeadz form by layering round tiles to create the wild bushiness of her hair.

There aren’t currently any official pictures or prices of these BrickHeadz, although it has been confirmed that they will be released on June 1, so we’d better put a few Galleons aside in anticipation!