Through the Eyes of a Weasleys’ Wizard Wheezes Employee: Letter 3 – The Dueling Club

At last, here is the third letter that has been written by none other than the very first Weasleys’ Wizard Wheezes employee. As Verity continues to help run the store, she sends her brother this letter. Here we have a first-hand look at Diagon Alley as He-Who-Must-Not-Be-Named secretly rises to power and the Ministry continues to defame Harry Potter. Make sure to read Letters 1 and 2 before reading this one. 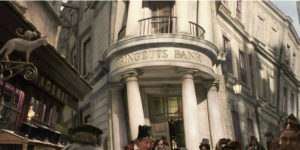 I can’t believe Dumbledore is still gone. George and I had a bet going. Shockingly, we both lost because neither of us dreamed the school would still be in the clutches of a pink dictator. I am sorry that your experience at Hogwarts this year has been a bit of a wreck; although, you did get to witness the legendary Weasley escapade in the flesh. Please keep me well informed on every prank pulled on the new administration. It gives me life.

The store has officially opened. It would be an understatement to say business is booming. Even though Diagon Alley is a shining and magnificent place, Weasleys’ Wizard Wheezes still manages to stick out in an eruption of purples and oranges. The inside of the store is even better. Imagine a jungle but with more explosions and candy. The smell is arguably even more impressive. When I was sleeping on the floor of the unopened building, all I could smell was old sawdust. Now, however, there is an unmistakable scent of melted chocolate, cotton candy, and failed explosive spells. The twins modeled it after a carnival – a Muggle carnival, which is a kaleidoscope of neon lights and clunky machines that add bread to every food imaginable. I believe the machines are called deep fryers. What an odd name!

The Weasleys are quite clever. Everything from the color of the boxes to the smell of the store to the location of the merchandise is planned out. They are also very hard-working. We spend most nights awake and snacking on sweets designed for late-night studying. Fred and George say they were inspired to make this line of candy by a girl named Hermione Granger. I am a fan. The sweets taste delightful. Plus, they help me keep my eyes open long enough to clean the store, bring in the new shipments, and sort the money.

The boys have cleared out their living space. I’m surprised two full-grown men fit. I find it amusing, especially since I now have a room at the Leaky Cauldron all to myself.

I hope I can visit you soon. I have been told not to come near the school. I may land myself in real trouble with the current anti-Potter and anti-Weasley sentiment. It’s too bad I got back after Christmas. Maybe you can stay with me during the Easter holidays. Mum has yet to visit. I think she’s scared of the fact that her daughter (troublemaker-in-chief) is now working with the infamous Fred and George Weasley. She probably thinks we are going to burn down Diagon Alley. She fails to realize that all three of us know how to toe the line… most of the time.

There did happen to be a duel last week, but this dung brain had it coming. Please remind me to write about it in my next letter. I don’t mind admitting that it was indeed quite the spectacle.

I was given my first  payment last week. I have a little extra pocket money left over. I’m planning on opening a Gringotts account. This was something I never had the luxury of having while traveling abroad. The goblins intimidate me a little bit, but they are respectful to their customers.

I have joined a dueling club. They meet here every Saturday. Many of the members are highly distinguished individuals. I have learned a great deal, and I have only been going for two weeks. It took a lot of work to get accepted (I had to win a duel against one of the lower-level members), but it was most certainly worth it. I have learned so much about the Ministry drama. I even know some very plausible theories on where the real Hogwarts headmaster is located. Of course, I won’t say any more in this letter.

Study hard for your Potions test. I am thinking of you often.