From Hogwarts professor in Harry Potter and the Chamber of Secrets to director, Sir Kenneth Branagh (Gilderoy Lockhart) recently sat down alongside actor Jamie Dornan (Robin Hood, Fifty Shades of Grey) to discuss his upcoming film Belfast, which he wrote himself. Branagh had confirmed last year that he would be working on a film about Belfast, where he grew up.

Dornan, who was also born in Belfast, will star alongside Caitríona Balfe (Super 8, Now You See Me), Ciarán Hinds (Aberforth Dumbledore in Harry Potter and the Deathly Hallows – Part 2), Colin Morgan (The Huntsman: Winter’s War, Merlin), Dame Judi Dench (Philomena, The Best Exotic Marigold Hotel), and newcomer Jude Hill. Belfast, a British-Irish black-and-white coming of age drama, has been described as Branagh’s “most personal film,” which centers on the childhood of a fictional nine-year-old boy, an illustration of Branagh himself in Northern Ireland in the late 1960s. 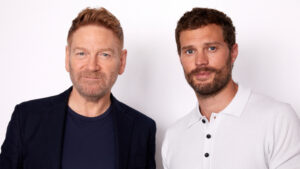 Branagh talks about the young character in his film, which has a similar story as something that happened to him in his younger years.

That happy life with a big extended family in a very exciting place to live, where life was about playing football, family, meals, a bit of church, and lots of movies. How you dealt with life once, just as we felt all in the last 18 months or so, when your world is turned upside down by uncertainty.

Dornan, who plays the role of Pa, the young boy’s father, was able to connect with his character very well, speaking about his life growing up in Belfast, Northern Ireland.

Belfast was first screened on September 2 at the Telluride Film Festival, held annually in Telluride, Colorado, during Labor Day weekend, becoming the festival’s most screened film this year. Belfast was also shown at the 2021 Toronto International Film Festival on September 12 and is currently set to be released on November 12 through Focus Features in the United States, as well as through Universal Pictures internationally.