A Pro-Am tournament is a one-day event held at the golf tournament between different teams. The teams consist of one professional golf player and four amateurs – in this case, celebrities as well as amateurs.

Each team competes against the other to win the event. GolfMagic described this year as having many “memorable highlights” from the stellar lineup.

Each celebrity, including Tom, took part in a long drive event on the ninth hole of the course. Other popular stars who went up against Tom were Spider-Man actor Tom Holland and One Direction singer Niall Horan, as well as several professional athletes and UK reality TV stars.

As you can see above, in the bloopers that have just been revealed, Tom had to shout “fore right” as he “sliced one towards the gallery.” Unfortunately, he wasn’t the winner and was beaten to the title by fellow actor Tom Holland.

Tom was also more than happy to take some time out of his day to snap some photos with adoring fans and sign some autographs in between holes. 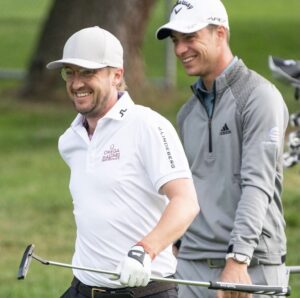 This is the second golf tournament in just a few weeks that Tom has attended. At the end of August, he played in the Omega European Masters Pro-Am in Switzerland.