Drarry Incorrect Quotes That Give Me Life: Christmas Edition

You know, shipping Drarry in the Harry Potter fandom is both such a bloody pain and a brilliantly hilarious, chaotic mesh of never-ending amusement. There is no in-between.

On the one hand, you’ve got the pure angst of having The-Boy-Who-Lived and The-Boy-Who-Was-A-Death-Eater having to make their relationship so clandestine. On the other hand, you’ve got a so-brave-that-it-constantly-toes-the-line-of-stupidity Gryffindor and an egotistical, slimy Slytherin git irritating the hell out of each other and their friends by their constant pining and shenanigans.

This is why you’ll often find many Drarry shippers with maddened glints in their eyes, cackling as they scroll through mountains of hilarious content about these two prats. And, since it’s a couple of days before Christmas, we decided to bless you once more with some Christmas-themed Drarry incorrect quotes.

You can thank us later. 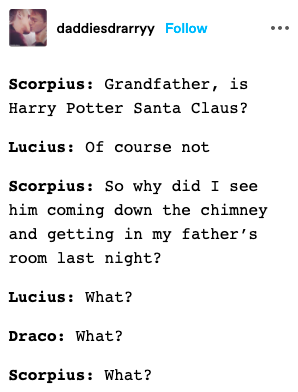 Ah, yes, this is one of the many, many reasons we adore the precious cinnamon roll, also known as Scorpius Malfoy. Ooh, imagine how much Lucius would love this kid, only to hide his grimace whenever he mentions anything so… Muggle (Yes, Lucius did, in fact, shudder at the mere mention of Santa Claus). 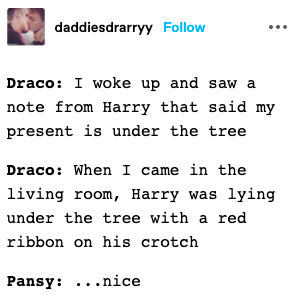 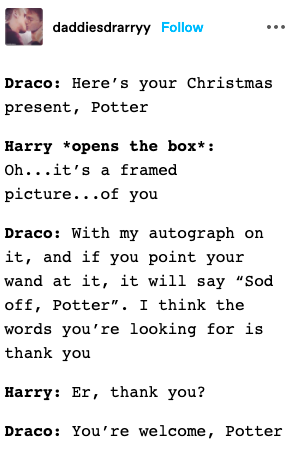 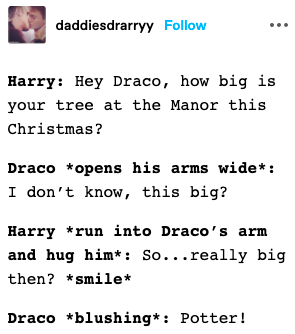 Aww, Harry being such a large ball of pure fluff and Draco being flustered by the cute affection is something that we will never get tired of. 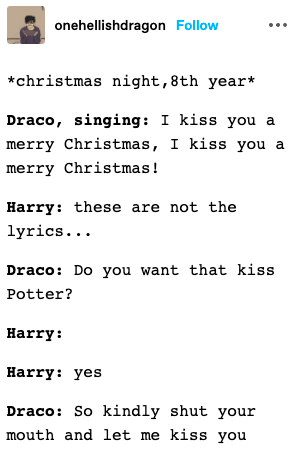 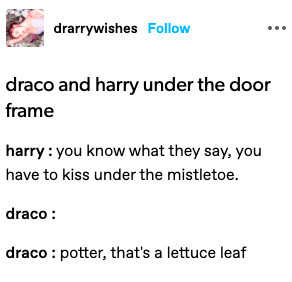 Hah! This is definitely something that those two lovesick idiots would do to get a quick snog in. Also, please ignore us as we bend over in laughter, imagining just how many times both of these situations have probably happened.

Annndddd now it’s time for us to spend hours obsessively searching for some fanart and fan fiction about Harry and Draco spending their Christmas together. All recommendations are more than welcome!