Fans of the Wizarding World who live in Japan will be pleased to discover that the Japanese version of Fantastic Beasts: The Secrets of Dumbledore will be released on April 8, 2022, at a special launch event in Tokyo, one week before its initial release date of April 15.

This follows suit with the release date of the film in Ireland and the United Kingdom, which was also pushed forward a week to April 8.

To celebrate this news, a kickoff event took place on December 1 (the anniversary of when Harry Potter and the Sorcerer’s Stone was released in Japan in 2001), which was attended by Mamoru Miyano (Fireworks), who is the Japanese voice actor dubbing Newt Scamander in the films, and actress and Harry Potter fan Mayuko Kawakita (Kumiko, the Treasure Hunter).

Discussing the title of the upcoming film and admitting that Dumbledore is a character with many secrets, Miyano thinks that “Harry Potter fans will come up with a lot of hints, so I’m looking forward to it more and more.” Miyano is excited and looking forward to the release of the long-awaited next installment of the Fantastic Beasts franchise, saying that he hopes “everyone will be looking forward to April and enjoy it together at the theater.” 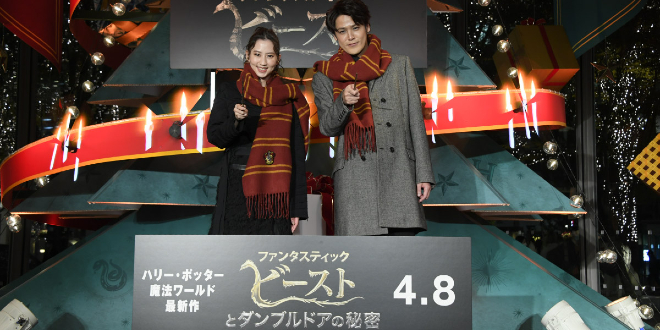 Mayuko Kawakita and Mamoru Miyano at the kick-off event for “Fantastic Beasts: The Secrets of Dumbledore”

Fans can book advance tickets for the launch event of Secrets of Dumbledore starting December 17. Those who get their hands on these tickets will receive a “clear file,” and when the paper is pulled out, a familiar character will appear. A general ticket will cost 1,500 yen ($13.29) for adults and 900 yen ($7.98) for children, and they will be available on a first-come, first-served basis, with a limited number available.