Welcome to the first Social Media Roundup of 2022! As well as ringing in the New Year, Wizarding World alumni have been posting about Harry Potter 20th Anniversary: Return to Hogwarts.

Return to Hogwarts has had everybody talking, including those who appeared in the special. To celebrate the release of the special on New Year’s Day, Emma Watson shared the movie poster for Harry Potter and the Philosopher’s Stone and a photo of herself and Daniel Radcliffe on the set of the final two Potter movies.

Tom Felton also shared some behind-the-scenes photos. He posted some snaps from the first movie to his Twitter and hoped his followers enjoyed reminiscing as much as he did.

hope you all enjoyed the return to hogwarts as much as we loved making it. here’s to another 20 magical years x pic.twitter.com/CADdKnKa15

Jason Isaacs (Lucius Malfoy) honored the occasion with a photo of himself and Ralph Fiennes (Voldemort) while encouraging fans to honor “the spirit of the boy who lived” and support Afghan refugees.

Oliver Phelps (George Weasley) shared an image from the Return to Hogwarts special highlighting the mislabeling of himself and his brother, James (Fred Weasley), with the lighthearted caption “I guess after all those pranks over the years somebody decided to get their revenge.” (Don’t worry, Phelps fans – we hear the mistake has now been corrected!)

He wasn’t the only one to find it funny. Matthew Lewis, Tom Felton, and Afshan Azad (Padma Patil) all shared their amusement in the comments on Oliver’s post. 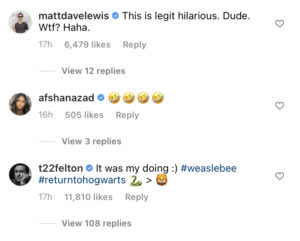 Oliver wasn’t the only alumnus to share a playful take on Return to Hogwarts. David Thewlis, who plays Remus Lupin, sadly did not appear in the special. Instead, he used his Instagram to share a humorous (and very likely untrue) take on why he was missing.

As well as enjoying the Return to Hogwarts special, Wizarding World alumni have been ringing in the New Year. First up is Matthew Lewis, who had an unconventional (and slightly painful) start to 2022.

But also, cute as hell.

Afshan Azad (Padma Patil) shared a heartwarming reel of all the moments that made her 2021 special.

In what has become a New Year’s tradition, Anna Shaffer (Romilda Vane) shared her list of aims for the year ahead.

Chris Rankin (Percy Weasley) has been on tour with The Magical Music of Harry Potter – Live in Concert. While home for the festive season, he took a moment to wish his followers a happy New Year with a photo from backstage on tour.

Jessie Cave (Lavender Brown) collated some photos that captured her 2021 and revealed that her New Year’s resolution is to “eat more carrot cake.”

Away from the nostalgia and New Year celebrations, James Phelps got us excited for the year ahead with some behind-the-scenes photos from the filming of an episode of his new travel show. This episode will feature Game of Thrones star Maisie Williams, who joins the twins on a trip to St. Lucia.

That’s it for our first Social Media Roundup of 2022! Check back in two weeks’ time to see what some of your favorite Wizarding World alumni have been up to.