Harry Potter and the Cursed Child on Broadway took a moment to shine a light on its understudies, with a total of six taking to the stage for a performance on Sunday, February 20.

In particular, the Broadway production was celebrating the performances of Kevin Rico Angulo, Rachel Leslie, and Sarita Amani Nash, who became the first BIPOC (Black, Indigenous, people of color) actors to play the roles of Harry, Ginny, and Delphi.

Sharing his debut as Harry on Instagram, Angulo stated that he will “remember yesterday for the rest of [his] life,” while Amani Nash shared her joy at playing Delphi and had an important message for her followers about representation.

I dreamed up this day for a long time and I have never been prouder of myself. Of us. BIPOC performers in lead roles are not just place holders with occasional chances to shine. We are incredible artists who bring unique talent and perspective to the stories and work we all love so much. I’ll say it til I’m blue in the face—although last night I literally was 💙😜—REPRESENTATION MATTERS!! Happy Black History Month!

Fans of Harry Potter have been including created BIPOC characters in their headcanons. A glance through Instagram, DeviantArt, or Tumblr will display fan art that incorporates headcanons that are often based on the ways that the fans themselves identify. Popular headcanons that portray BIPOC interpretations of characters include Harry as a biracial Indian character and Hermione as a woman of color, which has since become somewhat canon in Cursed Child.

This recent performance of Cursed Child is not only a cause for celebration of the talent of understudies in theater, but it’s also a moment for representation in the Wizarding World franchise, or as Nash puts it, “brb, adding an addendum to ‘Hogwarts: A History.’” 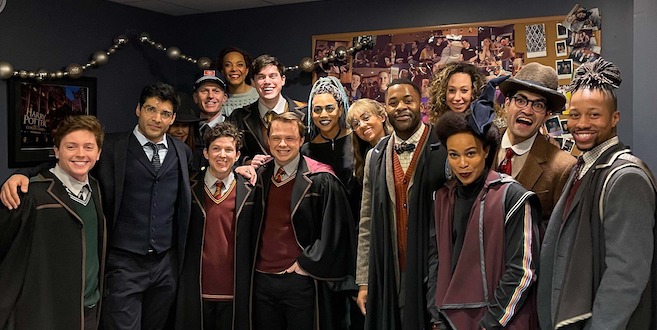 Continuing with celebrations of a different nature, House Pride nights are returning to Broadway. These special performances are dedicated to each Hogwarts House, and ticket holders are encouraged to come in their House colors or cosplay.

The first 100 audience members to arrive on their House Pride night will be granted early admission to take advantage of the theater’s AR experiences and gift shop. They will also receive a special gift and have the opportunity to take part in a costume contest.

A post shared by Harry Potter on Stage US (@cursedchildus)

Tickets for the House Pride performances can be purchased on the special House Pride page of the Cursed Child website. There are a limited number of orchestra and dress circle seats at $79.

Celebrate your inner Gryffindor, Slytherin, Hufflepuff
and Ravenclaw at the Return of
Harry Potter and the Cursed Child
House Pride Nights

The Tony Award-winning Broadway production of Harry Potter and the Cursed Child will once again celebrate the Hogwarts [H]ouses with four special performances dedicated to each house. Gryffindor, Slytherin, Hufflepuff and Ravenclaw [H]ouses are the four living and learning communities for Hogwarts students, named after the wizarding school’s four founders.

Participating ticket buyers will have access to a limited number of $79 orchestra and dress circle seats. The first 100 audience members who arrive early on each Wednesday evening will receive early admission to the theatre at 5:30 pm with access to concessions, the gift shop and AR experiences. They will also receive a special gift and the opportunity to participate in the [H]ouse pride costume contest with the chance to win exciting prizes. All audience members will receive a [H]ouse-themed souvenir pin. Tickets for these special performances can be purchased at www.HarryPotterBroadway.com/HousePride.

Harry Potter and the Cursed Child is one of the most defining pop culture events of the decade” (Forbes).

19 years after Harry, Ron and Hermione saved the wizarding world, they’re back on a most extraordinary new adventure – this time, joined by a brave new generation that has only just arrived at the legendary Hogwarts School of Witchcraft and Wizardry. Prepare for spectacular spells, a mind-blowing race through time, and an epic battle to stop mysterious forces, all while the future hangs in the balance.

The entire theatre has been transformed to immerse you in this one-of-a-kind experience packed with “thrilling theatricality and pulse-pounding storytelling” (The Hollywood Reporter). It will leave you “audibly wowed, cheering and gasping” (The Telegraph) as “visions of pure enchantment send shivers down your spine” (Rolling Stone). “You’ll be wondering ‘how’d they do that?’ for days to come” (People Magazine).

Do hold on to the edge of your seat, as this spellbinding spectacular will whisk you back to Hogwarts and beyond your imagination for a one-of-a-kind journey that is everything you hoped for and more.

For the latest health and safety protocols please visit www.HarryPotterBroadway.com/safety.