This year has been the worst yet. Not only did someone die, but I got shot down by Draco “Mr. Brooding” Malfoy to be my date to the Yule Ball. This year, Dumbledore decided it would be a great idea to host a dangerous tournament in which students compete for the Triwizard Cup. The student would have a lifetime of glory and quite possibly lose a limb – no big deal. The competition involved Hogwarts, the Beauxbatons Academy of Magic, and the Durmstrang Institute and came with plenty of drama. It was only supposed to be one person from each school chosen, but after some dramatic light dimming from Headmaster Dumbledore, Harry Potter was chosen as the fourth champion. This put him and Cedric Diggory, fellow Hufflepuff, head to head for the Hogwarts champion claim. Harry claimed he didn’t put his name in, but that boy loves the attention. For once, it was going to be a Hufflepuff and not a Gryffindor with all of the attention, but no. Also, Harry didn’t even meet the age requirement, so I guess being the Headmaster’s pet has its perks. 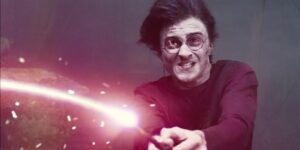 Each trial brought its own version of dramatics. The first trial had a dragon flying through the crowd, nearly killing the teachers seated in the bleachers (WELL DONE DRAGON). The second task involved Fleur Delacour (Beauxbatons champion) chickening out early and a lot of us staring at the top of the lake for an hour. Like, who planned this? Finally, the third task resulted in Fleur and Viktor Krum (Durmstrang champion) bowing out early and Cedric dead with Harry screaming that Old Voldy is back. Let’s just say I was already considering transferring, but now I am seriously debating life. You would think the Death Eater attack at the Quidditch World Cup would have made these challenges seem insensitive and like Dumbledore is testing the waters, but I guess our new motto is “living life on the edge, even if that means putting children at death’s door.”

Aside from the tournament and the death toll, the school year presented other challenges. Hogwarts also hosted the Yule Ball, and I decided to shoot my shot with Draco “My Father Will Hear About This” Malfoy. This resulted in Pansy Parkinson pushing me into the lake and a long, very cold walk back to the Hufflepuff common room. I ended up going alone to the Yule Ball, but it was still pretty fun. I even got to pass Professor Flitwick overhead as he surfed the crowd. Hermione and Ron became the talk of the night with their obvious flirt argument. I don’t know why they even bother; everyone knows they like each other. Put us out of our misery already! Also, did everyone just skip their summer haircuts? Harry with long hair should be illegal – and not because it looks good. 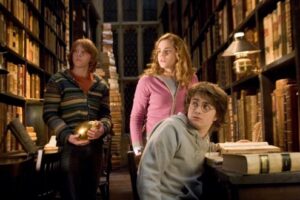 Gossip became the word of the year this term. Rita Skeeter popped out one gossip column after another. From dating rumors to Potter bashing to Dumbledore slandering, Rita made a real impact. The dating rumors of Hermione Granger and Harry Potter resulted in lots of hate mail to Hermione (should have been the other way around). Speaking of Granger, she became hard to shake this year with her new SPEW campaign. Several of us tried explaining to her that the elves like to work, but I guess it’s hard to hear with all that hair. Getting to class on time became impossible since I kept tripping over random articles of knitted clothing she was leaving around. The entire school couldn’t stop talking about her major outburst in Gryffindor’s Defense Against the Dark Arts lesson when she yelled at the new Professor, Alastor Moody, to stop showing the effects of the three unforgivable curses. I will admit it was a little hard to watch when he demonstrated it in our class, but hearing that a giant spider caused Pansy Parkinson to nearly pass out in the Slytherin lesson, made it a little more bearable.

Overall, the year had its ups and its downs. You would think that my ice bath would make me wary against Draco “Green Apple” Malfoy, but seeing him in dress robes made it pretty hard. Maybe next year, a Blast-Ended Skrewt will eat Pansy, and I can be there to take her place by his side. However, I am sure next year will be filled with more Potter tragedies. Cedric dying was hard on all of us, Hufflepuffs, since he was our shining star. Also, there goes my study buddy. With him being a few years above me, he was able to help me with homework he’s already done. As school terms at Hogwarts go, one death is an acceptable defeat. Why did it have to be Hufflepuff, though? Our one moment in the sun was squashed. Back to being the side characters, I guess. This year is probably not the last of the crazy, though, since APPARENTLY, He-Who-Must-Not-Be-Named is back. Wish me luck!