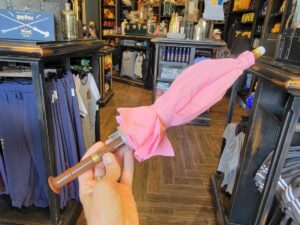 The Hagrid’s umbrella toy is now on sale at Universal Studios Hollywood.

New Fantastic Beasts merchandise has also made its way to Hollywood. A magnet showcasing several cute creatures from Fantastic Beasts: The Secrets of Dumbledore is available for $10, as well as a Hog’s Head magnet for the same price. 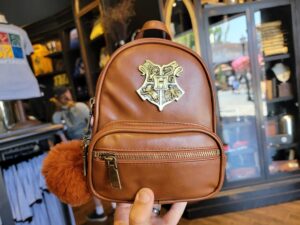 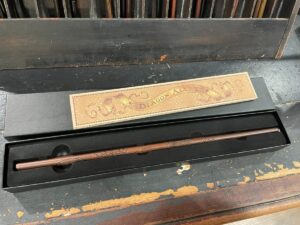 The Orlando theme park has also released brand-new Hogwarts clothing items, including a jacket, a sleeveless top, a dress, and sweatpants. Two new pins featuring Hogsmeade and Diagon Alley posters are available for $14 each. 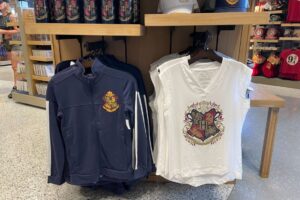 An adorable plush toy version of the Gringotts Ukrainian Ironbelly is new to the resort, selling for $25. The Mrs. Norris plush available in Hollywood is now on sale in Orlando as well.

The official Wizarding World Instagram recently unveiled new Diagon Alley–themed merchandise. One of the new items is a spirit jersey, which is £49.95, with “Diagon Alley” written on the back above an illustration of the pathway leading up to Gringotts bank. Stackable mugs featuring the storefronts of Flourish and Blotts, Weasleys’ Wizard Wheezes, Ollivanders wand shop, and Eeylops Owl Emporium are also available as a set of four, costing £40.00. Other Diagon Alley items include a mini backpack, a water bottle, a crossbody bag, a cushion, a tin street sign, a tote bag, a reusable shopping bag, socks, an oversized mug, a notebook, postcards, a keyring, and two sets of pins. The new line is available now at the Harry Potter Shop website.

Another new addition to the Harry Potter Shop is an enamel pin featuring Hagrid’s motorbike and the quote “I would trust Hagrid with my life.” The pin costs £12.95.

Which merchandise item are you most excited about? Let us know in the comments!