I have to confess that acting like a professional, normal human being while facing my long-time celebrity crush has been one of the most challenging things I’ve done in my entire life – and to my not-so-humble opinion, that is a lot, as I’m a practicing lawyer and have given birth twice.

We already know a lot about Stanislav, who, as you probably know, played the one and only Viktor Krum in Harry Potter and the Goblet of Fire, so it was a challenge to find a new and interesting way to make this interview both entertaining and meaningful. So after a long self-debate – while doing the dishes and driving around doing errands – I remembered a great infallible way to get to know a person: a game of truth or dare. 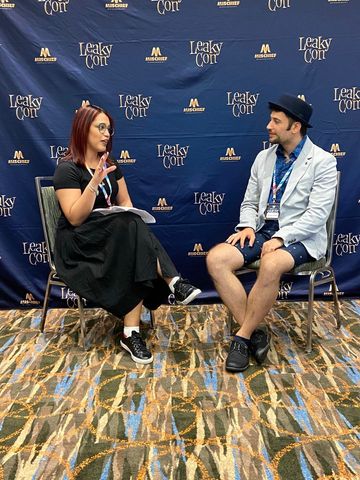 So here are ten new things that we learned from Stanislav that you didn’t know:

If you are wondering if he did any dares, well, I have to confess that he unquestionably defeated me in a staring contest, as I was not able to make him blink or laugh in 20 seconds. This is a personal blow to my dream of ever becoming a stand-up comedian, but as I was competing with an actor, I refuse to give up on that dream just yet.

When the interview was over, we took the mandatory picture together —which I will most definitely print out and put on my bedside table— and I was able to keep it together long enough for him not to see me almost pass out of happiness. And since he shared my post on Instagram, I’m confident to say that Stanislav and I are now best friends. 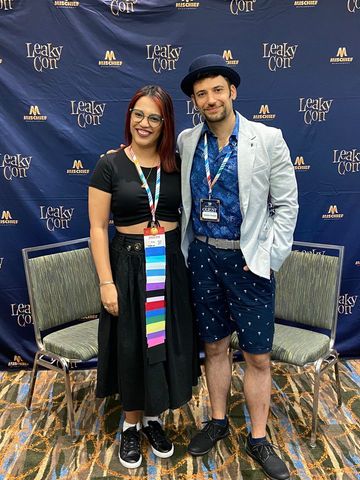 Betty Alvarez: Hi, my name is Betty from MuggleNet.

Betty: It's nice to meet you. We wanted to do something different. You're always so used to having formal interviews, or a lot of questions, so we wanted to play a game with you. Are you familiar with truth or dare?

Betty: There's a little bit of a twist. I have 15 questions, and you are going to be the one picking a random number. If you don't want to answer, or if you repeat a number, then you will have a dare. Okay. Pick a number between 1 and 50.

Betty: Would you date your high school crush today?

Stanislav: Today? Yes. Well, I don't know what she looks like currently, but from back then, yes.

Betty: The way you remember her.

Stanislav: Absolutely, yes. [I have] no idea what she looks like today, but yeah.

Betty: Where are you ticklish?

Stanislav: Around the ribs.

Betty: Give me another number.

Stanislav: I don't really go on [public transportation]. Well, I do go on planes. Probably starting a fight.

Stanislav: I was on a long flight. I didn't start the fight, but I threatened to kill someone on the flight because they just wouldn't leave my seat alone. The stewards had to come in, and they actually moved the problematic person because I told them, "If this continues on, I will lose my nerves and we'll have to sort out the situation."

Betty: It's reasonable if it was a long flight.

Stanislav: It was a very long flight. People sleep on those long flights; you put your seat back. The person started banging on my seat, threatening me. I just turned around and politely [explained that] it is not my problem, they should turn to the stewards to fix another seat for them. I will be sleeping, so I will put my seat back whether they like it or not. If they keep banging on my seat, I will have to take action.

Betty: I won't judge you. Give me another number.

Betty: Have you ever been caught picking your nose?

Betty: Now that's something I don't like. [When you're] driving and someone is staring out the window [picking their nose].

Betty: What's one movie you are embarrassed to admit you enjoy?

Stanislav: Embarrassed with a movie that I've made?

Betty: No, no. [A move] that you liked watching.

Betty: Even though it might be controversial, or considered for little kids.

Stanislav: Well, I still watch little children's movies and films today, like cartoons. I'm not embarrassed by any.

Betty: Maybe for your family members?

Stanislav: Yes, for any member of my family.

Betty: You would sacrifice [yourself]?

Stanislav: I wouldn't sacrifice, I'll get out of the system. I'll manage to survive.

Betty: You will survive the Hunger Games for a family member. That's the way to put it.

Betty: You already said [number] one! You have a dare. I will give you the option from one to five.

Betty: Okay. Stare at your opponent - I guess that's me [laughs] - for 20 seconds without blinking or laughing.

Betty: Twenty seconds is too long to stare at me because I will win or make you laugh. [short pause] Or maybe not. You're an actor. [laughs]

Betty: Okay, I will ask this one because I just want to know: What's something you would love to do with your friends that you will never do in front of your parents?

Stanislav: I'm too old to do things in front of my parents now. There are no restrictions. But when I was younger, probably things with love. You don't want to be kissing and doing that kind of stuff in front of your parents. It's embarrassing. Not now, though. I'm 37 years old.

Stanislav: It would be a bit awkward being like, "Hey, Mom, look at me! I can kiss!"

Betty: Have you ever re-gifted a present? Someone gave you something and you...

Stanislav: Oh, many times. Yes. Many times. [I like to] make use of things. Some presents are classified as dust collectors, so someone else can make use of something that otherwise just sits in a corner.

Betty: That's amazing. After you've dropped a piece of food, what's the longest time you've left it on the floor before eating it?

Stanislav: If we go back to school days... [laughs] Some things are probably still in the same place.

Stanislav: It depends on the food. [laughs] Some things are left to stay forgotten forever.

Betty: I will ask some random questions now. Would you rather have skin that changes color based on your emotions or tattoos that appear all over your body depicting what you did yesterday?

Stanislav: [Tattoos depicting] what I did. Or, no. That would give away... well, both of them would give [things] away. I guess tattoos; it wouldn't really matter.

Betty: Maybe you could hide them.

Stanislav: It would be more inconvenient to know your current state than what I did yesterday. If they said, "You did this yesterday," it's in the past. It doesn't matter. I'd rather hide my current state.

Stanislav: [I'd rather] get away with every lie I tell. People can lie to me [and] I can catch them, but getting away [with lying] is the better option.

Betty: What do you think would be worse: Ending every call with an, "I love you" no matter who you're talking to or accidentally calling a partner by another name during a fight?

Stanislav: I think calling them by another name will just escalate the fires. I have sort of done that. It's not a good experience. Well, I wasn't necessarily calling them another name. [I was] not pronouncing it properly so they heard another name, and I was like, "I didn't say this other name!" "No, you just said it!" You end up closing the phone and throwing it in the trunk.

Betty: Oh, gosh. Our final question: Would you rather be able to speak any language or be able to communicate with animals?

Stanislav: Well, I sort of can communicate with animals already. Languages open portals, so I'd rather speak languages. With animals, you need an open heart to communicate; it's not really difficult. But languages? The human complex of things? Yeah.

Betty: That's wonderful. Thank you very much for your time.