National Doodle Day is back, and so is David Bradley with another delightful drawing of his Harry Potter film character, Argus Filch. The event, which celebrates its 18th anniversary this year, is a fundraiser for Epilepsy Action, a charity organization based in England and Wales that seeks to improve the lives of those affected by epilepsy. Bradley’s sketch went up for auction on September 2.

It’s not Bradley’s first cartoon for the cause. The star has contributed several times to the fundraiser, putting pen to paper last year along with Robbie Coltrane (Rubeus Hagrid). This year, as in 2017 and 2021, Bradley’s drawing is a testament to his time in the wizarding world. 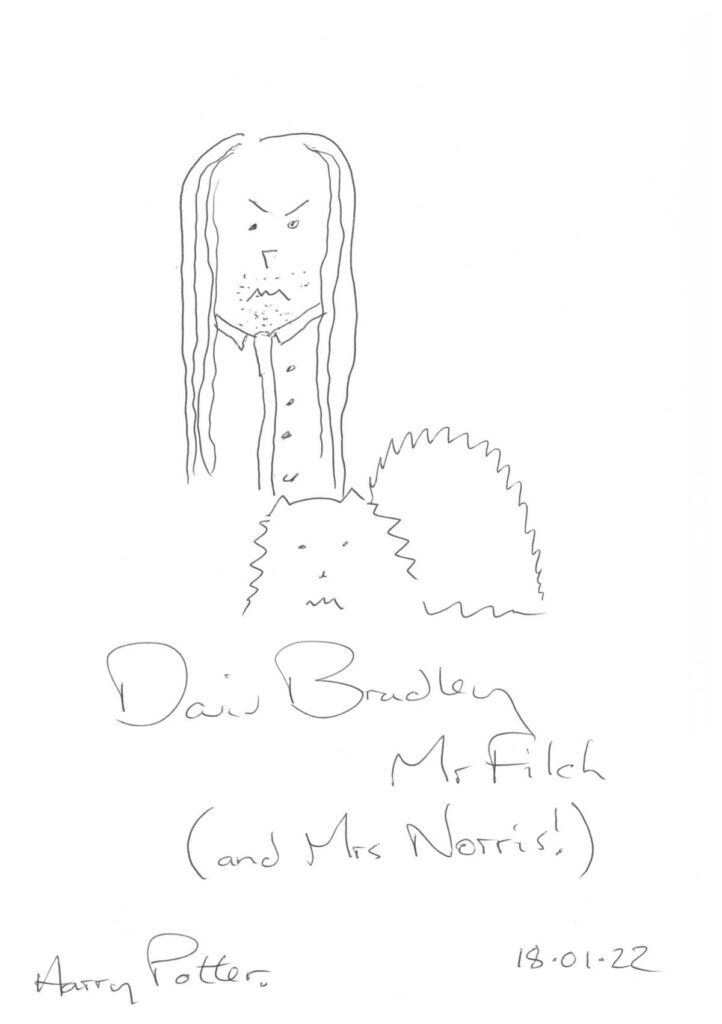 Bradley’s artistic interpretation of Argus Filch this year has a heavy smattering of five-o’clock shadow and slightly mismatched eyes. The effect is a caretaker projecting the kind of exhaustion only the Weasley twins can elicit. While last year’s Mrs. Norris featured angry eyebrows, this, year she sports a petrified expression reminiscent of her fate in Harry Potter and the Chamber of Secrets.

The auction lasted three days and raised its highest total ever at £15,378.21. Other celebrity contributors included Sir Ian McKellen (The Lord of the Rings), Tom Vaughan-Lawlor (Avengers: Infinity War), Anton Lesser (Pirates of the Caribbean), and more.

We are so excited to announce, that this years National Doodle Day fundraising auction has raised an incredible £15,378.21 🎉.

This is the highest total EVER raised for National Doodle Day, and we’re so grateful to everyone who placed a bid or donated an art piece 💜. pic.twitter.com/n0fQ7Bs9yO

National Doodle Day is a fantastic event that gives people the opportunity to own a unique piece of art created by their favourite celebrities, artists and illustrators. Every doodle sold raises vital funds to support people affected by epilepsy. The selection of doodles up for grabs this year is wonderfully varied – there is something for everyone to buy and love.

If you didn’t get the chance to bid, you can still contribute by donating directly to the organization. You can also visit the Epilepsy Action website to learn more about its common goals to improve the lives of everyone affected by the condition.

David Bradley, who played Argus Filch in the Harry Potter films, has put pen to paper and created a unique doodle for this year’s National Doodle Day. His creation will go under the hammer in a three-day eBay auction starting on National Doodle Day, Friday 2 September. The event celebrates its 18th anniversary this year.

Bradley’s doodle joins creations from acting legends Sir Ian McKellen ([The] Lord of the Rings), Thomas Vaughan-Lawlor (Avengers) and Anton Lesser (Game of Thrones). Many other artists and illustrators have also created artworks for the auction. The proceeds from every artwork sold will go to supporting the 600,000 people living with epilepsy in the UK.

Doodling extraordinaire and illustrator of the Horrible Histories book series Martin Brown, who has sketched three doodles for the auction, said: “My mum has epilepsy. She started having seizures when she was in her 60s, but it took a distressingly long time to get the diagnosis. Epilepsy can be quite unlike what we think epilepsy is. So any way to spread awareness of everything that epilepsy is – and isn’t – is OK by me. Even if it’s just with a doodle.”

“I say [']just a doodle.['] There’s really no ‘just’ about it. I’m a great believer in the idea that everyone can draw. And doodling is drawing. If you can doodle, you can draw. Who cares if your drawing doesn’t look ‘right’? Drawings can be realistic. But they don’t have to be. In fact, maybe drawing can be quite unlike what we think drawing is. So go on, have a doodle, have a draw.”

Michael King, fundraising events officer at Epilepsy Action, said: “National Doodle Day is a fantastic event that gives people the opportunity to own a unique piece of art created by their favourite celebrities, artists and illustrators. Every doodle sold raises vital funds to support people affected by epilepsy.”

“The selection of doodles up for grabs this year is wonderfully varied – there is something for everyone to buy and love. Since launching National Doodle Day 18 years ago, we’ve had over 1,500 celebrities and artists support us. We can’t wait to unveil this year’s creations, so take this opportunity to snap up a doodle and help to make a difference!”

Since National Doodle Day began in 2004, celebrities and artists have come together to raise over £190,000 for Epilepsy Action to help the charity support people affected by epilepsy.

For more information about National Doodle Day, follow @NationalDoodleDay on Instagram or visit www.epilepsy.org.uk/auction to bid on this year’s doodles.