EXCLUSIVE: Meet the underdogs of the Quidditch World Cup — the NAU Narwhals

When the US Quidditch World Cup kicks off in Rock Hill, South Carolina, in just a few short weeks, teams from around the country will be vying to come out on top. Northern Arizona University’s Quidditch team, the NAU Narwhals, is one of the smallest college teams, but don’t let that fool you. The team made it to the Elite Eight stage of last year’s World Cup, and – having defeated both Arizona State University and the University of Arizona to qualify for this year’s World Cup in Rock Hill – the Narwhals are proof that determination and hard work are key to Quidditch success.

MuggleNet had the opportunity to interview Narwhals team captain Adam Beller, and – being the Muggle Quidditch fans we are – we couldn’t pass up the opportunity.

Hello, Adam. MuggleNet's SnitchCenter has been following the development of Muggle Quidditch for many years now, and we have covered quite a few of the past championships and World Cups. Tell us the basic history behind the Narwhal Quidditch [team] at NAU.

Narwhal Quidditch has been around for about 5 years now. It began here as just a hobby; however, over the years the sport has attracted more and more athletes, making it a lot more of a physical game. We have grown as a club and program as we’ve continued to build our fan base, improve strategy, and become more of a nationally known team.

When did the Narwhals Quidditch team take a life of its own within the school and decide to become a competitive force in the USQ (United States Quidditch) Association?

The Narwhals Quidditch team was a competitive force from the get-go. The team has always wanted to be a national contender, and as time went on, we learned more, practiced harder, and essentially committed ourselves to doing whatever it takes to become a force to be reckoned with.

What has been the most memorable experience thus far for you and your team?

The most memorable experience in the past year for myself and the team was the weekend of the Western Regional Championship. We were put into a dangerous position; we had to win our way to World Cup from a tough slot in the secondary bracket. However, that weekend we rallied together and did what needed to be done in order to qualify for World for the third year in a row. It was amazing to see this group of individuals really band together and keep each other strong through the weekend. We had a job that needed to be done, and we definitely went to work.

The West region is certainly one of the top regions in the United States. How has a small university like NAU competed against the likes of Arizona State University, University of Arizona, UCLA, USC, and annual powerhouse the Lost Boys?

For what we lack in school size, we make up in talent. The Narwhals Quidditch team is full of highly talented individuals of all positions. We are really blessed with athletic ability. We may not be the largest team with regards to physical size; however, our drive is strong, and we are really willing fight to the very last whistle in order to come out on top.

Is the Narwhals Quidditch team funded as a sport or a club within the confines of NAU? How does the team raise funds to travel to all of these competitions and Regional Championships and World Cups?

We are definitely funded as a club within the confines of NAU; however, the amount allotted for the team by the university is nowhere near enough to fund our travels [for] the year. We as individuals have to reach out to friends, fans, and family to receive donations to make our travels possible. We ask for personal donations, hold fundraisers, and even hold online campaigns to raise money for the team.

What are the expectations of the team at this year's Quidditch World Cup that takes place on April 11-12 in Rock Hill, South Carolina?

Our first and foremost expectation and goal for World Cup 8 is game experience. We will be matched up against many teams that we do not normally see during the rest of the year due to the regional separation. The majority of the team is comprised of [freshmen], so it will be good to give everyone some looks as to what teams from all over the nation play like. Our dream, as is the dream of all other 79 teams attending World Cup, is to come home with the gold. We are definitely not favorited to win it all this year; however, we want to shock the nation as the NAU Narwhals Quidditch team wins the title of National Champion.

As a bonus question: Adam, how did you first discover/take interest in Harry Potter, and has your viewpoint of the series been changed in any way by playing Quidditch?

I have been a Harry Potter fan for years. I’ve read all of the books and seen all of the movies at least once. I’ve always loved stories of fantasy and adventure. My viewpoint of the series has been changed in the way that I’ve really gained respect for the characters who play the sport in the books and movies. It is extremely mentally and physically demanding playing it on the ground; I can only imagine what it would be like to play in the air! 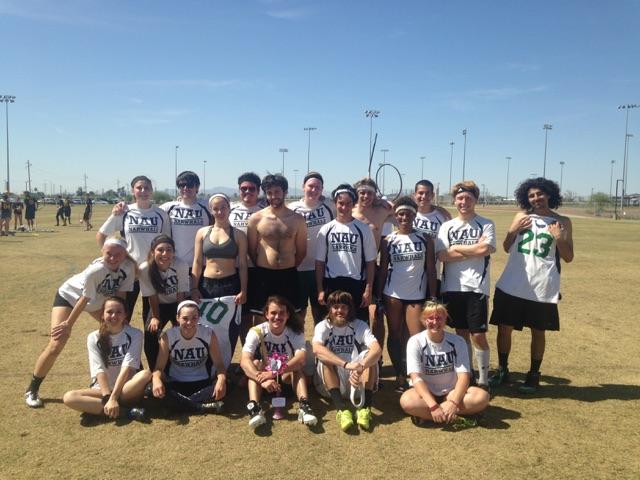 The NAU Narwhals are currently running an online campaign on Indiegogo to help fund their trip to the Quidditch World Cup. Plenty of NAU Narwhals perks are available for various levels of donation, and you can visit the campaign here.

Good luck to the NAU Narwhals and to all of the teams competing at Quidditch World Cup 8 in Rock Hill!