What is it you truly desire? If the answer is more episodes of Lucifer, the saucy yet heartfelt fantasy series about the fallen angel working with the Los Angeles Police Department, then your prayers have been answered.

Originally canceled by Fox, Lucifer was resurrected by Netflix last year for its fourth season. More recently, it was announced that a sixth season is in the works. “Lucifans” have much to celebrate; today, at last, we have been blessed with all sixteen episodes of season five streaming online. This fascinating meld of biblical lore and modern homicide investigation has pulled in a massive audience, and Harry Potter fans would find compelling characters and familiar themes of courage, loyalty, and a complex perspective on good vs. evil. 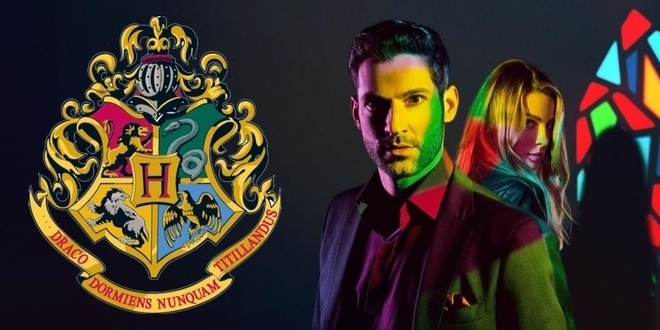 To celebrate Lucifer’s return to our screens, I thought I’d play Sorting Ceremony with our favorite angels, demons, and humans. Here’s how I would Sort these Lucifer characters into the four Hogwarts Houses.

Ella is an intelligent, feisty forensic scientist. I think she would fit in well in almost any House, but she exudes Hufflepuff traits best. She is sweet, non-judgmental, and spreads hugs around like confetti. She loves her work and trusts her teammates. Also, she highly values her loyalty to her faith.

Revealed to actually be Cain, son of Adam and Eve, Pierce was a major character in season three. His ultimate goal was to die and be released from his torturously long life. He believed that it didn’t matter whom he hurt – even Chloe, for whom he cared. Since he believed that the ends justify the means, he is a Slytherin.

Dr. Linda starts off as Lucifer’s disbelieving therapist and lover, but over the series, she has become increasingly wrapped up in his supernatural world. Despite giving birth to a half-angel, she has remained a grounded voice of reason. She is a true Ravenclaw.

Eve, the first woman, appears in season four, having left Heaven to be with Lucifer. Naive yet full of heart, she persistently strives to keep Lucifer’s affection before realizing that she should figure herself out and put her own happiness first. She is a Hufflepuff: unyieldingly loyal and unafraid of toil.

Goddess, the mother of angels, came to Earth by inhabiting the body of a lawyer named Charlotte Richards. Though she was able to bond with Lucifer and Amenadiel, Goddess was cunning and willing to threaten humanity to get what she wanted. Much like her ex-husband, she possessed many Slytherin attributes.

Amenadiel is Lucifer’s headstrong, honor-bound older brother, the first angel. His life changed last season when he became a father. Amenadiel can be both loyal and manipulative, but above all, he is righteous. This makes him a strong candidate for Gryffindor House.

Maze is a demon who followed Lucifer to LA. She has adapted to life on Earth, applying her talents to bounty-hunting. Though the obvious choice for a demon might be Slytherin, I actually see her more as a Hufflepuff; through her time with humans, she has become more loyal, vulnerable, and protective.

Unfortunately for Detective Dan, he is the butt of most of Lucifer’s jokes. I think it is appropriate to assume he would not get into Hogwarts but would be a Squib.

Chloe is a brave and ambitious homicide detective and the object of Lucifer’s affection. Her most consistent personality trait is her rationality; it takes her an astoundingly long time to accept the truth about Lucifer’s identity. Still, she is highly clever and likes to do things by the book. Therefore, she fits best in Ravenclaw House.

One might not expect someone as arrogant as Lucifer to be so charming. Though he is (as he insists from the pilot episode) literally the devil and capable of intense fury, he is far from evil. In fact, Lucifer cares deeply about justice. He is bold and frequently steps up to save others; he belongs in Gryffindor.

I’m relieved that Netflix is hell-bent on keeping the magic of Lucifer going, and I can’t wait to see how these complex characters will develop next. Check out this spellbinding series if you haven’t already, and leave us a comment letting us know if you agree or disagree with this Sorting!