Interactive wands come in several designs, but the most common are the re-creations of character wands such as Harry, Hermione, Dumbledore, and even Luna. There are also several wands specially created for the Wizarding World theme parks that are classified by 13 different types of wood that correspond to birthdays. The parks even provide nifty charts that allow you to match your birthday to the type of wood. In addition, Universal Orlando Resort releases an annual limited Collector’s Edition wand, with last year’s wand being released in July to coincide with Harry’s birthday. Every interactive wand is distinguished by a small translucent ball affixed to the tip. They range in price from $55 for a standard wand and $70 for a Collector’s Edition wand.

This year’s Collector’s Edition wand seems to be inspired by the spring season with a gorgeous pommel molded to resemble a flower bud and the end of its hilt made to look like leaves cradling the blade of the wand. It also comes with a collectible box and a map of locations to cast spells at the Wizarding World of Harry Potter – Hogsmeade at Universal’s Islands of Adventure and the Wizarding World of Harry Potter – Diagon Alley at Universal Studios Florida. 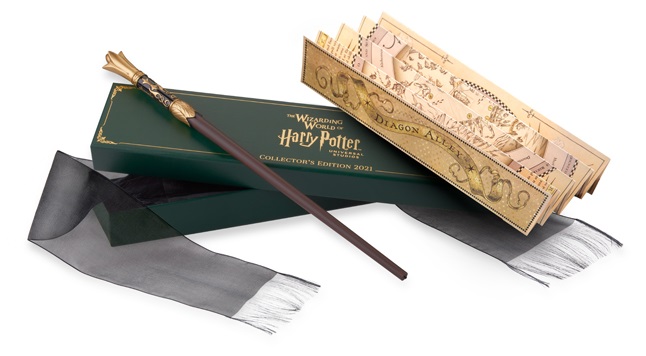 The Interactive 2021 Collector’s Edition Wand is seemingly inspired by spring with a golden flower bud pommel and leaves cradling the blade.

While it sports a breathtaking design, it is an interactive wand and is, therefore, not just for show. At specific locations in the theme parks outlined by the accompanying map, interactive wands can be used to cast a spell and activate a magical moment. These moments range from repairing a suit of armor to levitating a Quaffle and Bludgers.

Of course, there are several locations spread out across both Wizarding World parks. Orlando Informer filmed and compiled all the locations and magical moments in a YouTube video, through which you can experience the spells virtually if you’re currently unable to travel.

Have you purchased a wand from the Wizarding World of Harry Potter at Universal Orlando Resort? Which one is your favorite? Let us know in the comments.